Unsettled weather for London and the Olympics this weekend

A strong area of low pressure will push eastward into the United Kingdom this weekend, and will likely cause unsettled weather for the Olympic games.

The United Kingdom has had its fair share of stormy weather this summer. June 2012 was the wettest period ever recorded for the United Kingdom since record-keeping began in 1900. Meanwhile, England and Wales each tied with 1860 as the wettest June since their records began in 1766. Although there has been somewhat of a lull (not completely) in the stormy activity across London and the 2012 Summer Olympic games this past week, a new area of low pressure will likely bring more unsettled weather across the UK which could make for a wet weekend. Sunday appears to be the wettest day of the weekend, and it could cause minor problems for the Olympic games. 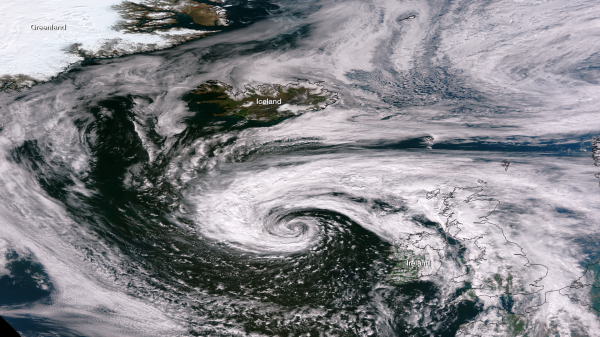 Area of low pressure is pushing to the east towards the United Kingdom for this upcoming weekend. Suomi NPP satellite image was taken on August 1, 2012 at 13:45 GMT. Image Credit: NOAA

For this upcoming weekend, an area of strong low pressure with a barometric pressure around 975 millibars is spinning south of Iceland and pushing east towards the British Isles. Parts of this storm is producing tropical storm force winds with gusts over 65 miles her hour. Based on the latest model runs of the GFS and the European, this area of low pressure will push into the United Kingdom Saturday and Sunday this weekend. The area of low pressure will likely weaken as it pushes ashore, but many areas can expect showers and a few thundershowers across the region, especially on Sunday, August 5, 2012. Some storms could produce locally heavy rain, so all outdoor events should be aware of this unsettled weather pattern this weekend. For the Equestrian events in Greenwich Park, make sure you grab your raincoats! Temperatures will generally climb around the range of 18°C-21°C, or highs in the mid to upper 60s (Fahrenheit).

The Summer Olympics in London! Consider brining your raincoats if you plan on being outdoors there this weekend. Image Credit: Bobby Scroggs

Bottom line: After a decent streak of fairly settled weather across England and the London Summer Olympics for the last week of July 2012, a new area of low pressure south of Iceland will advance to the east and provide unsettled weather across the UK. Some areas could see locally heavy rain Sunday afternoon, so you might want to bring your raincoats if you plan on being outdoors in London for the Olympic games. Stay dry!