A newly-discovered backbone structure in a well-preserved 240-million-year-old fossil fish reveals an inflexible and slow swimmer, an evolutionary dead end.

Paleontologists have discovered a unique backbone structure, never seen before, in the fossil remains of a fish that lived 240 million years ago. This long-bodied fish has the scientific name Saurichthys curionii. Its vertebrae had twice the number of bony extensions called vertebral arches than similar fish, which formed its elongated body. However, as a result of its backbone structure, this primitive predatory fish lacked the flexibility of today’s long-bodied fish – for example, eels – plus it could not swim with any great speed or stamina. This inflexible and slow swimmer ultimately met an evolutionary dead end. Scientists described Saurichthys curionii‘s backbone structure in a paper published on October 7, 2013 in Nature Communications. 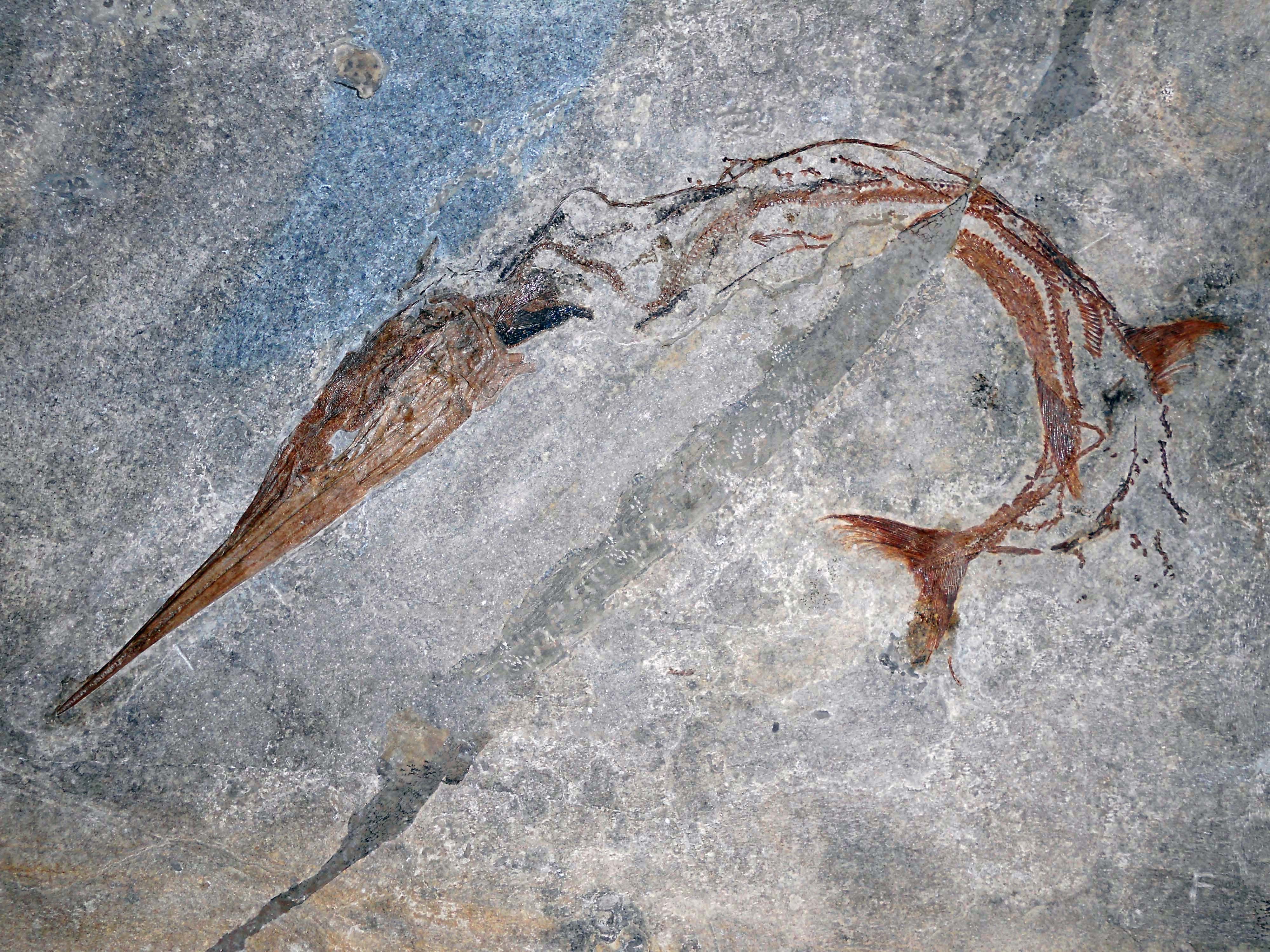 The 240-million-year-old fossil fish, Saurichthys curionii, a primitive predatory fish with a unique backbone structure. Image via University of Zurich.

Long-bodied fish in today’s world, such as eels and needlefish, have their snakelike structure due to additional or longer vertebrae. Vertebrae are pieces of bone that connect to form the spine. The back end of each vertebra has skeletal structures called vertebral arches, to which muscles attach. Unlike any fish ever known, Saurichthys curionii had a second set of vertebral arches that gave shape to its elongated body.

The animation above – by Dirk Baum, nextanimation.de and University of Zurich – shows the evolutionary development of Saurichthys curionii‘s spinal design from an ancestral fish that lived 252 million years ago. Skeletal projections in each vertebra doubled without an increase in the number of vertebrae.

The fossil recently studied by scientists measures over a-foot-and-a-half (half a meter) in length. It had been so well preserved that scientists could see where tendons and tendon attachments had once connected muscle to the skeleton. This allowed the scientists to infer some characteristics about Saurichthys curionii‘s range of motion. In a press release, lead author Erin E. Maxwell wrote:

Saurichthys curionii was certainly not as flexible as today’s eels and, unlike modern oceanic fishes such as tuna, was probably unable to swim for long distances at high speed. Based upon its appearance and lifestyle, the roughly half-meter-long fish is most comparable to the garfish or needlefish that exist today.

Scientists found the new fossil of Saurichthys curionii at the Swiss side of Monte San Giorgio, a mountain that straddles the border of Switzerland and Italy. The site is famous for its marine fossils from the Triassic period, spanning 250 to 200 million years ago, and has been declared a world heritage site by UNESCO.

A screen capture from the animation, showing an artist’s conception of what Saurichthys curionii may have looked like. Image credit: Image credit: Dirk Baum, nextanimation.de and University of Zurich.

Bottom line: A fossilized fish, dating back 240 million years, has revealed a new type of backbone structure not seen before. It had a second set of bony extensions called vertebral arches on each vertebra. Scientists described this fossil fish, with the scientific name of Saurichthys curionii, in the October 7, 2013 issue of Nature Communications.