Many rainfall records have been broken or will be broken before 2013 is over, in the U.S. Southeast. Due to the rain, it has been a cool summer there.

A very persistent weather pattern across the United States this summer has kept the Southeast unusually wet and cool. Meanwhile, the western U.S. is experiencing dry and hot conditions. A constant trough of low pressure has been across the eastern U.S. for several months providing the U.S. Southeast plenty of rain and unseasonably cool temperatures for the heart of the summer. Weather systems have been able to push unusually farther south this summer than what we typically expect. As soon as these systems push into the Southeast, they have literally stalled and provided a constant source of moisture, producing unusually high amounts of precipitation totals. This post will show you how unusual the weather has been across the U.S. Southeast and discuss whether potential records may be broken, as rainfall continues across the region. 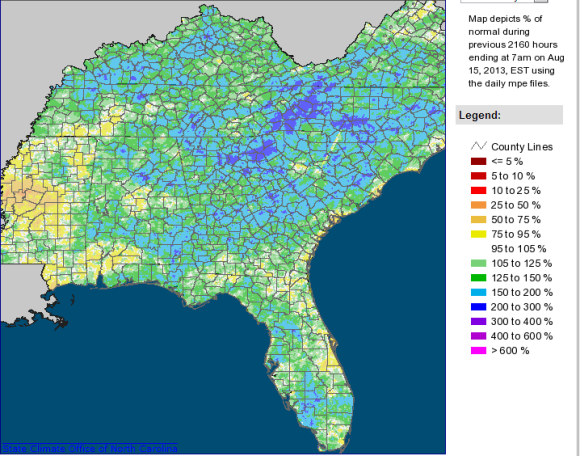 Rainfall totals have been extremely high across the Southeast, with some spots seeing rainfall totals well over 150% above normal. Image Credit: Southeast Regional Climate Center

Across Georgia, rainfall totals are adding up to totals typically seen across an entire average year. Atlanta, Georgia averages 49.68 inches per year based on climatology records from 1981-2010. As of August 19, 2013, Atlanta has already recorded 50.43 inches of rain, and we still have over four months left until the year ends.

In July 2013, many cities across the Southeast recorded their wettest July on record. These cities include Gainesville, Florida at 16.65 inches, Asheville, North Carolina at 13.69 inches, Greenville-Spartanburg, South Carolina at 14.45 inches, and Roanoke, Virginia at 12.73 inches. If many cities across the U.S. Southeast go on to see average rainfall from September through December this year, their overall rainfall totals for the year could easily add up to create a top 10 wettest year since record-keeping began. 2013 is already ranked as the second-wettest year so far across the Southeast. If the region continues to see more rain for the rest of the year, it could make 2013 the wettest year on record. From January through July, the Southeast has recorded 39.99 inches of rain (1,015.75 mm). The average rainfall for the first seven months of the year is typically 30.60 inches (777.24 mm), which means the Southeast is 9.39 inches (238.51 mm) above average. The wettest year to have occurred in the U.S. Southeast, currently, is 2003.

Due to the constant rains, by the way, the majority of the major Southeast cities have not had to issue air quality alerts this summer. The lack of those alerts is a rarity at this time of year. 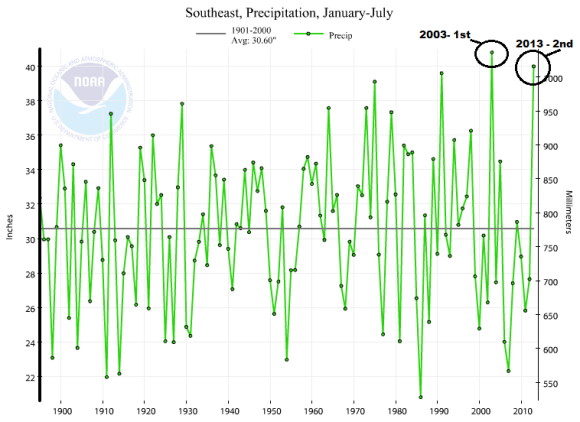 Precipitation in the Southeast from January 2013 through July 2013. 2013 is the second wettest year so far for this region. Image Credit: NCDC

Over this past week, temperatures were nearly 20 to 25 degrees below average across parts of north and central Alabama, north and central Georgia, South Carolina, and North Carolina thanks to a shallow layer of cold air spilling down on the eastern side of the Appalachian Mountains. Cities such as Atlanta and Athens, Georgia broke their lowest maximum temperatures as highs stuck around in the mid to upper 60s. On August 17, Atlanta had a high of only 66 degrees Fahrenheit, which was a record daily low maximum temperature that broke the old record of 74°F set back in 1892 and 1939. The average high temperature for this time of the year is 90°F. Whenever you beat an old record by more than five degrees, it simply shows you how unusual and bizarre the weather can be. 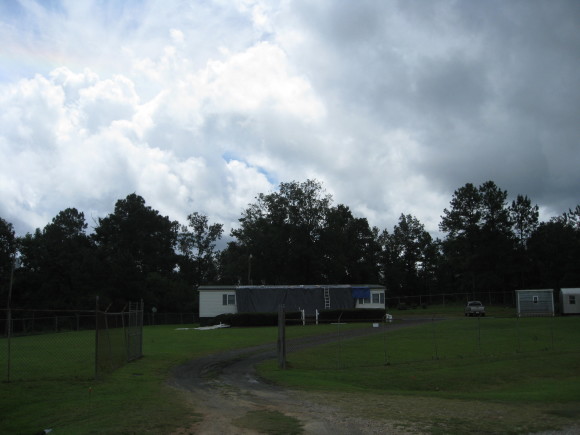 Tornadoes in the U.S. Southeast

While it has been wet, we have also seen an unusual occurrence of tornadoes across the U.S. Southeast that are not associated with tropical cyclones. Typically, tornadoes rarely happen during the summer months as the majority of the energy in the atmosphere stays north, across the northern United States and into Canada. With ridging and heat across the states, there is typically very little steering or wind shear associated with storms in the Southeast, and tornadoes typically never form.

However, in 2013, we have seen tornadoes develop inland. Back on June 13, a strong cold front pushed through the Southeast and produced widespread wind damage and even a couple of tornadoes across North Georgia. The most recent storm to produce a tornado in the month of August was an EF-1 tornado that struck Heard County along the Alabama and Georgia border on August 18, 2013. It was an actual supercell not associated with a tropical cyclone. It formed along a stationary front sitting across central Georgia that was lifting northward. North of the front, a wedge of shallow, cool air was entrenched across northeastern Georgia. With these two lifting mechanisms, there was just enough shear to produce supercells and even a tornado on that day. 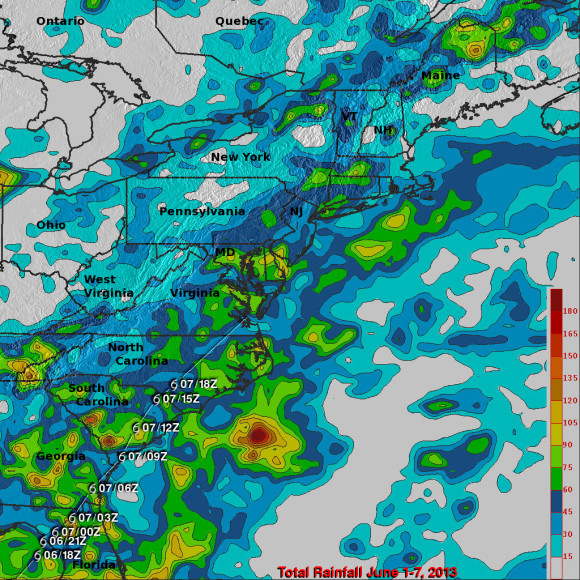 One of my biggest concerns across the southeastern United States is the threat for tropical cyclones hitting the region. A tropical system impacting the Southeast is the last thing the region needs. Such a system would likely create widespread flooding across the region, as more rain falls on the already-soaked ground. That scenario could easily develop into a billion-dollar disaster, depending on the track and movement of the cyclone.

As we enter the peak of the hurricane season, the Southeast coast becomes very vulnerable to future hits. All of the atmospheric conditions are appearing very favorable for tropical cyclone development towards the end of August and into the month of September. My biggest fear is seeing a tropical system push into the Southeast, because this region does not need to see any additional heavy rain.

Bottom line: 2013 is already ranked as the second-wettest period for the U.S. Southeast since record-keeping began. With additional months to go before the year ends, 2013 could easily become the wettest period ever record in the region. Many cities have already received their average yearly rainfall totals. As we enter the peak of hurricane season, a major concern is the potential for a tropical cyclone hitting the region and dumping more heavy rain. If this occurs, we could see major flooding problems in the U.S. Southeast. Let’s hope the rest of the 2013 Atlantic hurricane season remains quiet.