Snow depth across the United States is over double the amount we saw this time last year with nearly 67% of the country currently covered in snow.

What a difference a year makes, when it comes to weather and climate. 2012 was considered a very mild winter for the United States. We didn’t see significant winter storms or extreme cold temperatures across the lower 48. However, winter 2013-2014 is dramatically different. Even though Northern Hemisphere winter does not officially begin until December 21, 2013, winter has already made its presence known across the United States. In many part of the western U.S., temperatures have already fallen below zero. For today’s date – December 9, 2013 – there is more snow on the ground in the U.S. than on this date in at least the past 10 years.

The difference between this year and last is particularly striking, with 2013 having more than double the amount of snow coverage in the U.S. than on this date last year.

Snow depth in the United States in 2012: 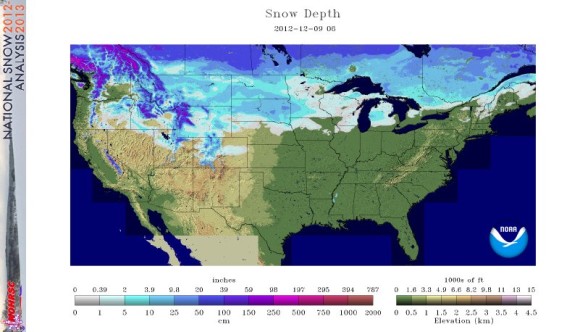 Snow depth in the United States in 2013: 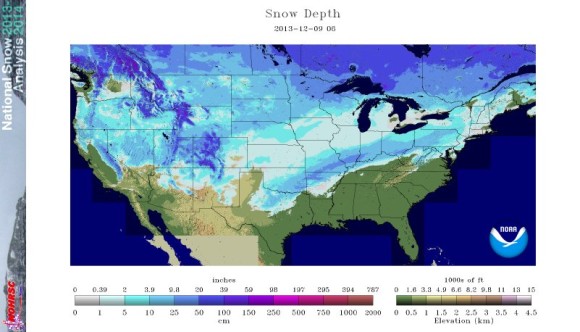 Snow depth across the United States on December 9, 2013.

Back on December 9, 2012, the United States had 26% of the area covered in snow. The average snow depth was only 1.6 inch. Most of the snow pack was in the areas you would generally expect it for the first part of December- across the northern parts of the United States and in and around mountainous regions.

As we fast forward to the present time, snow coverage has more than doubled, for this date. Today, 66.9% of the United States is covered by snow. The average snow depth is 3.6 inches.

Temperatures are also much colder across the country than a year ago. In fact, some would argue that the arctic air mass across the U.S. is the coldest we have seen in years.

Does it mean global warming is not happening? No. When we look at climate, we cannot look at single year year and make a judgement on whether or not the globe is cooling or warming. We have to look at averages over a long period of time to determine the rate of warming or cooling over a large land mass (for example, a continent).

Bottom line: Snow depth across the United States is more than double what it was on this date in 2012. An Arctic air mass has spilled across a large majority of the U.S. With an active subtropical jet stream to develop storms across the U.S., the mixture of moisture and cold temperatures has produced widespread snow and ice over a large part of the United States. It is amazing to see how a difference one year can make!