U.S. Northeast braces for another storm this week

It won’t be as powerful as Hurricane Sandy. But beach erosion, storm surge, and falling trees likely will occur on Wednesday and Thursday, November 7-8, 2012.

It was only a week ago today that Hurricane Sandy pushed ashore, providing devastating storm surge and wind across New Jersey, New York, and throughout the Mid-Atlantic and the Northeast. Sandy will rank as one of the top three costliest disasters in the United States. The clean up effort is still occurring, and likely will be for some time. Unfortunately, the recovery process will likely come to a halt later this week as our weather models are indicating another storm could affect portions of the Mid-Atlantic and the Northeast. This storm will be considered a nor’easter, but it will not be as powerful as Sandy was back on October 29, 2012. However, beach erosion, storm surge, and another chance for falling trees will likely occur with this upcoming storm on Wednesday and Thursday of this week (November 7-8, 2012).

Since the end of last week, a lot of the weather models were showing an area of low pressure developing off the southeast coast of the U.S. and intensifying as it pushed to the north/northeast. As of now, our most reliable models are indicating a low pressure with a pressure around 980-990 millibars (mb). For comparison, the pressure for Hurricane Sandy was 945 mb, which is a pressure reading equivalent to a Category 3 or 4 hurricane. Remember, the lower the pressure, the stronger the storm. With that said, a storm of this magnitude will not produce the damage as we saw from Hurricane Sandy, but it will provide problems with the clean up effort as heavy rains, strong winds sustained around 30 to 40 miles per hour, and storm surge will be associated with this storm. The warm gulf stream and the interaction of a strong jet stream with cold temperatures pushing to the south will help enhance this storm and allow it to deepen on Tuesday and Wednesday. 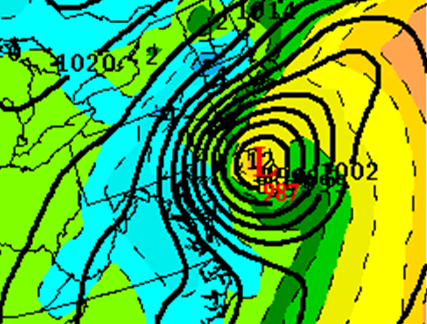 The track of the storm is important in regards to who sees snow, wind, and greatest threat for storm surge. Since low pressure spins counterclockwise in the Northern Hemisphere, land areas north of the center of low pressure will experience the greatest threat for storm surge. The further west the area of low pressure travels, the greater chances it could bring colder air south and perhaps provide snow across parts of the Northeast. If the storm is further east, then the effects from the storm will be less and it will not be as intense. However, the most reliable models indicate the storm to be close enough to cause problems and they show it slowing down and weakening across the region Thursday and Friday. 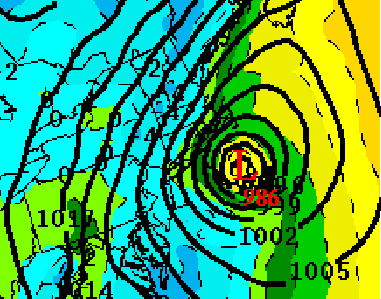 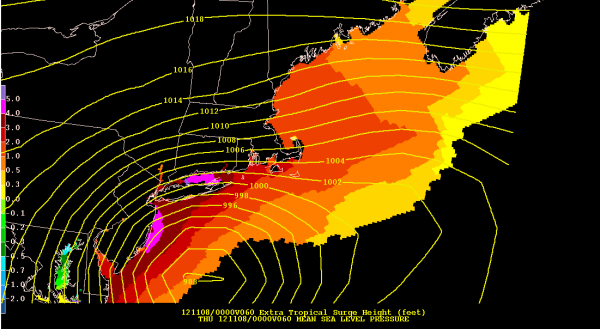 Storm surge could range from 2-6 feet across the Northeast as the nor’easter pushes north on November 8, 2012. Image Credit: NOAA

Fortunately, we are no longer in an astronomical high tide. With this in mind, we will not see an increase in wave height and storm surge as we did when Sandy struck the coast two days before Halloween. However, storm surge could reach two to six feet across New Jersey and New York. According to the National Weather Service in Upton, New York, the highest tidal anomalies will likely occur across the western Long Island Sound due to piling of water in Northeast Fetch. They are also forecasting the South Shore Bays will experience high tidal anomalies too. Overall, meteorologists are predicting minor to moderate coastal flooding will occur with this storm.

Potential snowfall accumulations for the Northeast on Thursday, November 8, 2012. Note: these totals will change as the track and intensity of the storm fluctuates. Image Credit: HPC

Most nor’easters have a rain and snow side to them. In this case, the further away you are from the coast, the better chances you will see snow. I believe the snowfall potential will stay west of New Jersey, and will occur further inland across Pennsylvania, New York, and possibly south into the Mid-Atlantic. It is still unknown as to how much snow will accumulate across this region Thursday, but some areas could see over four to six inches of snow, especially across higher terrain and mountainous areas. Rainfall totals will likely add up to be around one to two inches from the North Carolina coast and points northward. When you add the rain and wind, I would not be surprised to see a few more trees to go down across the same areas affected by Sandy.

Winds will not be as strong or severe as Sandy, but they will pose a threat to bring down more trees across the U.S. Mid-Atlantic and Northeast. Tropical Storm force winds (39 mph or higher) could occur from coastal Virginia to Massachusetts Wednesday through Thursday. If the low deepens more and has a lower pressure than 985 mb, we could see gusts as high as 60 or 70 mph in some areas. Regardless, it only takes 40-50 mph winds to knock over trees who’s roots are in very saturated soils. If your room is located near a large tree, you might want to reconsider sleeping in that room and move into another location in your house that would be safer. A lot of the deaths that occurred from Sandy a week ago was due to falling trees on cars and houses.

Bottom line: The nor’easter that will develop Wednesday and Thursday – November 7 and 8, 2012 – across the U.S. Northeast will not be like Sandy at all, but it will provide a punch that will likely cause more power outages, downed trees, inland snow, and storm surge/beach erosion along the coastline. The recovery efforts taking place across the damaged area from Sandy will likely be set back and come to a complete halt. I repeat, this nor’easter will be nothing like Hurricane Sandy, but it can still cause problems across the region. If you no longer have a home or still experiencing no power, just note that temperatures will be chilly with highs in the 40s. Regardless, it’s not a good situation for those that are struggling after Sandy devastated parts of the Northeast last week.