Rammasun has made a second, powerful landfall in China after intensifying yesterday. At landfall, it had a sustained wind of 155 mph with gusts near 190 mph.

The China Meteorological Administration said Rammasun was a super typhoon as it made landfall in Hainan – an island in the southernmost province of China – today (July 18, 2014) at around 6 a.m. EDT (1000 UTC). At that time, it had a sustained wind of 155 mph with gusts near 190 mph. Rammasun, also known as Glenda in the Philippines, struck that country earlier this week as a Category 3 storm. After pushing close to Manila and emerging back over the open water of the South China Sea, the storm lost its punch thanks to cooler ocean waters and the interaction it had over land. However, Rammsun then rapidly intensified in about six hours yesterday (July 17) from 9-14 UTC.

Super typhoons are categorized as having sustained winds of 150 mph (241 km/h) or higher.

China’s official news agency Xinhua had said earlier that Rammasun was expected to be the strongest typhoon to hit Hainan in 40 years. It is only the third super typhoon ever to hit China.

At this writing (July 18 at 7:15 a.m. EDT), the eyewall is over the city of Haikou. Several million people have been/will experience typhoon (74 mph or higher) winds.

The island of Hainan contains roughly 8 million people, with more than 1.5 million people living in the city of Haikou in the northern part of the island. In other words, some of the most heavily populated areas of Hainan are in the direct path of Typhoon Rammasun today. 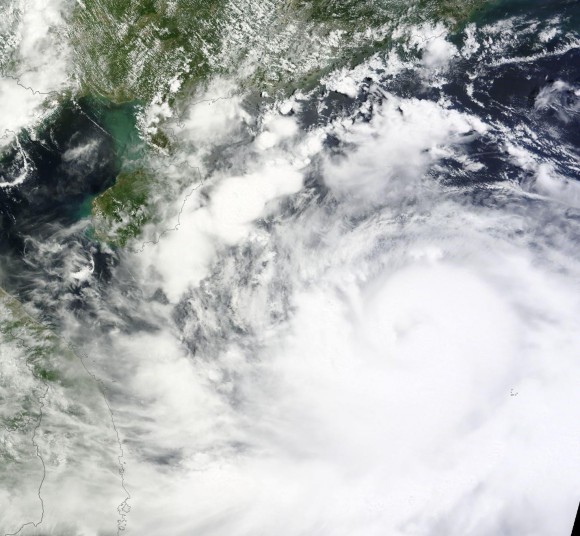 Typhoon Rammasun killed at least 38 people, with another dozen missing, after the storm’s heavy rains and strong winds struck the Philippines. Over 26,000 homes were damaged and nearly 7,000 homes destroyed, according to the Philippines’ NDRRMC. A few areas received over 10 inches (254 cm) of rain that caused flash flooding. The typhoon was a Category 1 storms as it neared Manila with 90 mph (80 knot) winds. The typhoon became slightly disorganized as it pushed over the country. The forecast was for the storm to continue to push to the northwest and slowly strengthen as a Category 2 storm. However, the storm really organized and has become a big threat for Hainan.

Check out some of the incredible footage of Typhoon Rammasun as it pushed across the Philippines. Credit: James Reynolds

Typhoon Rammasun intensified quickly on July 17, when this image was aquired via satellite. Image Credit: NOAA

Bottom line: Typhoon Rammasun has stuck Hainan – an island in the southernmost province of China – as a super typhoon on July 18, 2014. Heavy rain, flash flooding, storm surge, and damaging winds are the main impacts to be expected on the island as the typhoon continues to push off to the northwest. By the time the storm hits Vietnam, it will likely weaken to a Category 1 or weak Category 2 hurricane with winds around 85 knots.