Two recent studies suggest that the climate warming occurring on Earth today is happening at a dramatically fast rate. It’s this rate of change, scientists say – the speed with which average global temperatures are expected to climb over the coming decades – that will make the ongoing climate warming troublesome for living things on Earth. Both groups of scientists used the phrase “10 times faster” to describe climate changes. One study, from Stanford University, suggests that climate change is happening 10 times faster than it has at any time in the past 65 million years. The other study, from the University of Texas, suggests that Antarctic permafrost is now melting 10 times faster than in 11,000 years, adding further evidence that Earth’s Antarctic is, in fact, warming just as Earth’s Arctic is. Click the links below to learn more about these studies. 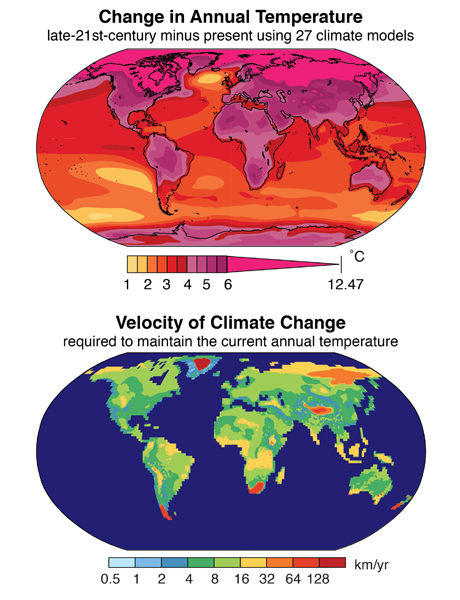 The top map shows global temperatures in the late 21st century, based on current warming trends. The bottom map illustrates the velocity of climate change, or how far species in any given area will need to migrate by the end of the 21st century to experience climate similar to present. Images via Stanford University.

Noah Diffenbaugh and Chris Field, both senior fellows at the Stanford Woods Institute for the Environment, published these results as part of a special report on climate change in the August 2013 issue of Science. They conducted a “targeted but broad” review of scientific literature on aspects of climate change that can affect ecosystems, and they investigated how recent observations and projections for climate change in the coming century compare to past events in Earth’s history.

For instance, they compare the current warming to the 5-degree-Celsius temperature hike that occurred 20,000 years ago, as Earth emerged from the last ice age. They say that change was:

… comparable to the high-end of the projections for warming over the 20th and 21st centuries.

Diffenbaugh and Field also say in their press release that:

… some of the strongest evidence for how the global climate system responds to high levels of carbon dioxide comes from paleoclimate studies. Fifty-five million years ago, carbon dioxide in the atmosphere was elevated to a level comparable to today. The Arctic Ocean did not have ice in the summer, and nearby land was warm enough to support alligators and palm trees.

But they say there are two key differences for ecosystems in the coming decades compared with the geologic past. The rapid pace of modern climate change is one. The other is that:

… today there are multiple human stressors that were not present 55 million years ago, such as urbanization and air and water pollution.

Read more about Diffenbaugh and Field’s study from Stanford

One of the McMurdo Dry Valleys in Antarctica. Scientists found a rapid retreat of ground ice in Garwood Valley, one of the Dry Valleys, similar to the rates of permafrost melt observed in the coastal Arctic. Photo by Bryan Kiechie on Flickr, via Motherboard 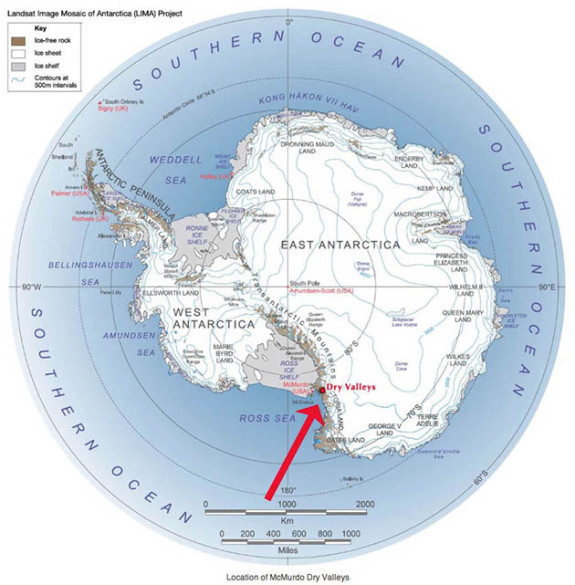 Landsat satellite mosaic of Antarctica, showing the location of the Dry Valleys, via University of Texas.

Antarctic permafrost melting 10 times faster than in 11 thousand years. Publishing in the journal Nature on July 24, 2013, scientists at the University of Texas report on their study of one of Antarctica’s McMurdo Dry Valleys, showing that the rate of permafrost melting there is now 10 times the historic rate documented for the entire present geological epoch.

Prior to this finding, the permafrost in this region of Antarctica was assumed to be stable. These researchers say this permafrost melting in this part of Antarctica has accelerated so that it’s now “comparable to the Arctic.”

UT’s Joseph Levy and his team documented the change through LIDAR – a detection system that works on the principle of radar, but uses light from a laser – and time-lapse photography. They found a rapid retreat of ground ice in Garwood Valley, one of the McMurdo Dry Valleys, similar to the lower rates of permafrost melt observed in the coastal Arctic and Tibet. Levy said:

The big tell here is that the ice is vanishing — it’s melting faster each time we measure. This is a dramatic shift from recent history.

As opposed to the potentially catastrophic bump in greenhouse gas emissions that could result if Arctic permafrost quickly melts, scientists here are presenting their findings as more of an interesting geologic curiosity. As the ground continues to thaw, researcher believe the landscape will sink and buckle, creating retrogressive thaw slumps.

Furthermore, unlike other ice melting in Antarctica which can contribute significantly to sea-level rise depending upon whether its already floating on the water or resting on solid ground, the ground ice melting here isn’t really a major component of the frozen water on the continent.

Read more about Levy’s study from the University of Texas

Bottom line: Two recent studies use the phrase “10 times faster” to describe ongoing climate warming. One study, from Stanford University, suggests that climate change is happening 10 times faster than it has at any time in the past 65 million years. The other study, from the University of Texas, suggests that Antarctic permafrost is now melting 10 times Faster than it has in 11,000 years, adding further evidence that Earth’s Antarctic is, in fact, warming just as Earth’s Arctic is.