Europe’s Mount Etna and Nicaragua’s Momotombo both erupted spectacularly in this first week of December, 2015.

Mount Etna began erupting on December 2, 2015 for the first time in two years. This active stratovolcano is located the east coast of the island of Sicily, Italy. Italy’s National Institute of Public Geophysics and Volcanology (INGV) said the eruption was short, but one of the most violent of the past two decades. The footage in the video above is thanks to Sicilian photographer Marco Restivo, who captured Mount Etna’s Voragine crater blasting flame into the sky. NASA said on December 3 that Mount Etna sent fountains of lava into the air and jets of hot material as high as 3 kilometers above the summit.

Occurring between 2:20am and 3:10am UTC, the eruption saw a sustained lava fountain reach heights of over 1 kilometer, although some jets of hot material made it as high as 3 km above the summit of the volcano. The large volcano boasts five craters in total and is estimated to have been active for some 2.5 million years.

Ash fell onto the nearby villages Linguaglossa, Francavilla di Sicilia, Milazzo, Messina, and Reggio Calabria, and resulted in the closure of at least one airport. 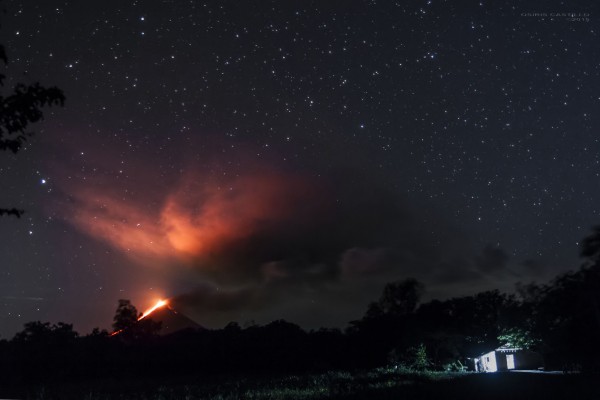 Momotombo – a stratovolcano in not far from the city of León, Nicaragua – erupted for the first time since 1905. INETER reported that the volcano generated a gas-and-ash plume that rose 1 kilometer above the crater and drifted southwest. An impressive lava fountain along with a dark ash plume was reported over the area near Lake Managua. More explosions followed, and ash plumes rose 300 meters (about 1,000 feet) into the air. Ashfall was reported in nearby communities, including La Concha, Los Arcos, Flor de la Piedra, La Paz Centro, and León. Wired reported on December 2:

Local reports suggest that people started feeling tremors and noticing steam plumes from Momotombo over the past few weeks. Then, late on Monday night, a new eruption began, sending incandescent volcanic debris cascading down the slopes of the volcano. By morning, the activity had waned, though a strong steam plume can still be spotted coming from the volcano on the INETER webcam pointed at Momotombo. At least six communities around Momotombo reported ash fall and as a precaution, schools in the region have been closed.