These quakes were off the coast of northern Sumatra in Indonesia, where a 9.1-magnitude quake on December 26, 2004 triggered a tsunami that killed 230,000 people.

The Pacific Tsunami Warning Center in Hawaii has now cancelled the tsunami watch issued earlier today (April 11, 2012) after an 8.7 magnitude earthquake and 8.2 magnitude aftershock in the Indian Ocean. These two large earthquakes took place off the west coast of northern Sumatra in Indonesia. The first quake struck at 8:38 UTC today. The aftershock, which was south of the first quake, struck at 10:43 UTC. The Pacific Tsunami Warning centered was quoted by the BBC as saying:

…the threat has diminished or is over for most areas.

The Pacific Tsunami Warning Center cancelled the watch at 12:36 UTC today. They had previously issued the watch for Indonesia, India, Sri Lanka, Australia, Myanmar, Thailand, the Maldives and other Indian Ocean islands, Malaysia, Pakistan, Somalia, Oman, Iran, Bangladesh, Kenya, South Africa and Singapore. A “watch” means there is the potential for a tsunami. The Pacific Tsunami Warning Center never issued a “warning” for this event, which would have meant a tsunami was imminent, but the governments of some coastal nations surrounding the Indian Ocean did issue tsunami warnings. There has been no report of major destruction from coastal tsunamis or any deaths. However, many media reported there was “panic” in coastal areas in Sumatra, as residents packed the roads attempting to flee to higher ground.

According to the Washington Post, the earthquake was felt in Singapore, Thailand, Bangladesh, Malaysia and India.

Here are the specifics of the 8.7 magnitude earthquake, according to the U.S. Geological Survey (USGS):

Here are the specifics of the 8.2 magnitude earthquake, according to USGS: 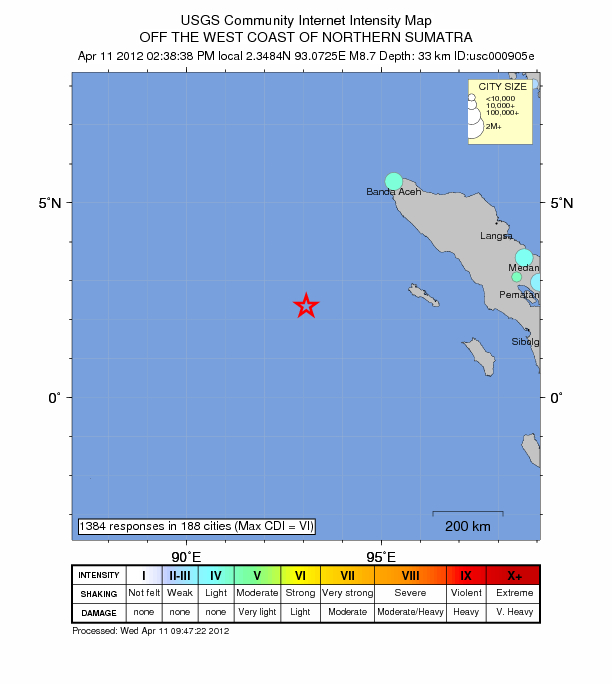 The 8.7 magnitude quake took place 434 kilometers (269 miles) from Banda Aceh in Sumatra, Indonesia, the site of three-quarters of the deaths from the 2004 earthquake and tsunami in Indonesia.

Bottom line: An 8.7 magnitude earthquake in the Indian Ocean today (April 11, 2012) triggered a tsunami watch, but Pacific Tsunami Warning Center officials said later that the tsunami, although measurable, “does not look major.” An 8.2 magnitude aftershock followed the original quake by just over two hours. A watch means there is the potential for a tsunami, not that one is imminent. The quake happened the same area where a 9.1-magnitude earthquake in late 2004 caused a tsunami that killed 230,000 people.