Karen is expected to hit the Gulf Coast near southeast Louisiana, with a second possible landfall near Mobile, Alabama, Saturday night and Sunday morning.

Tropical Storm Karen, the 11th named storm of the 2013 Atlantic hurricane season has formed in the Gulf of Mexico and is expected to make a U.S. landfall sometime late Saturday night (October 5, 2013) and into early Sunday morning. Whether it is a 50 mph storm or a 75 mph hurricane, the impacts will generally be the same with heavy rain, gusty winds, rip currents, and isolated tornadoes as it pushes to the northeast. Although Karen is not expected to reach hurricane strength at this time, the U.S. Southeast should watch this storm, and be prepared.

As of the advisory posted 4 p.m. CDT (2300 UTC) on October 4, 2013, Tropical Storm Karen is located in the central Gulf of Mexico with sustained winds at 50 mph. The pressure of the storm was down to 999 millibars (mb) yesterday evening, but the pressure has risen to 1003 mb as of this afternoon. The higher the pressure, the weaker the storm. Karen is expected to hit the Gulf Coast near southeast Louisiana and possibly make a second landfall near Mobile, Alabama. Regardless where it hits, worst of the storm will be on the right side of the center of low pressure.

The National Hurricane forecast track of Tropical Storm Karen over the next five days.

Rainfall totals could add up to around three to five inches along the Gulf Coast with isolated amounts around six inches. As the storm is picked up by a cold front to the west, rainfall totals will increase across eastern Georgia and South Carolina with rainfall totals around one to two inches. The U.S. Southeast – which was previously experiencing heavy rain – has had a little time to dry out over the past several weeks, so only minor flooding is expected at this time.

Rainfall totals over the next three days in the United States. Image Credit: Weather Prediction Center

Tropical Storm Karen has had a difficult time organizing, thanks to wind shear and some dry air filtering into the system over the past couple of days. Wind shear is acting like a bully and pushing Karen’s convection to the eastern part of the storm and not allowing storms to develop around the center of low pressure. As long as wind shear continues to blow over the storm, Karen will have a difficult time intensifying into a hurricane. With this in mind, the National Hurricane Center (NHC) is forecasting Karen to stay below hurricane strength. The environment has been too much for Karen to handle so far, so I give Karen a 10% chance of becoming a hurricane in the next 24 hours. The NHC has dropped the hurricane watches that were issued yesterday along the coastline. A tropical storm warning has been issued for Morgan City, Louisiana to the mouth of the Pearl River. A tropical storm watch has been issued for the city of New Orleans, Lake Maurepas, and Lake Pontchartrain. Storm surge of three to five feet is possible along the mouth of the Mississippi River to the Pearl River. Two to four feet of storm surge possible along Apalachee Bay including Cedar Key. Elsewhere along the coast, storm surge of one to two feet is possible. 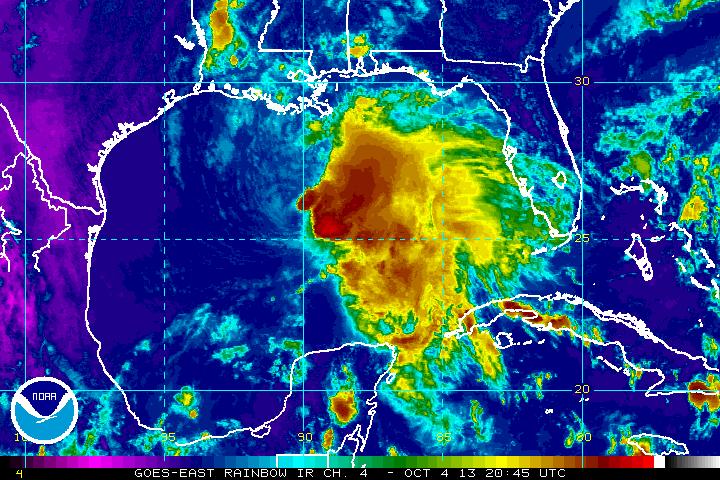 Infrared image of Tropical Storm Karen. Most of the storms are located east of the center of the storm. Image Credit: NOAA

Bottom line: Tropical Storm Karen will provide heavy rain between 3-6 inches in a few spots across the southeastern United States. The storm will likely stay as a tropical storm and has a very low chance of becoming a hurricane because it is encountering a lot of dry air and wind shear. All eyes remain in the Gulf of Mexico as Karen gets closer to the Gulf Coast. This storm is due to make landfall sometime Saturday night and Sunday morning.