Isaac is expected to make landfall late Tuesday or Wednesday, which is the anniversary of Hurricane Katrina in 2005. Isaac is a much weaker storm than Katrina, fortunately.

UPDATE AUGUST 28 6:51 EDT (10:51 UTC) Tropical Storm Isaac is on the verge of becoming a hurricane this morning as it pushes up through the Gulf of Mexico. Gulf coast residents are preparing, and some in the low-lying coast have left boarded-up homes for inland shelter, but many other people are staying, according to news reports. At 4 a.m. EDT (8 UTC), Isaac had maximum sustained winds of 70 miles per hour. Minimum hurricane wind speeds are 74 miles per hour. The National Hurricane Center projects that Isaac will become a low-end Category 2 hurricane by landfall this evening or Wednesday. It is now projecting 100 mph winds at landfall, slightly greater the previously expected 90 mph.

Tropical Storm Isaac did little damage as it passed the Florida Keys earlier this week. Its trek across the Gulf of Mexico does appear to be taking it toward New Orleans. It is expected to make landfall tonight (August 28) and into Wednesday morning, which will be the anniversary of Hurricane Katrina’s 2005 landfall near New Orleans. The comparisons are inevitable, but Isaac is not as powerful as Katrina was. Its winds are not as strong, and storm surges are expected to be lower.

Storm surge (flooding) is expected to be the primary cause of damage from Isaac. The National Hurricane Center says …

Significant doesn’t mean devastating, remember, and no one expects Isaac to wreak the havoc that Hurricane Katrina did in 2005. New Orleans’ levee failure during Katrina was at least in part an upkeep issue. By all reports, the levees have now been fortified. By some estimates, the storm surge for Isaac is expected to be a maximum of 11-13 feet above normal tide level, with most of the central Gulf coast dealing with 5-10 feet. In contrast, the maximum storm surge for Katrina was 25-28 feet above normal along the Mississippi coast, with 10-20 feet along the Louisiana coast. 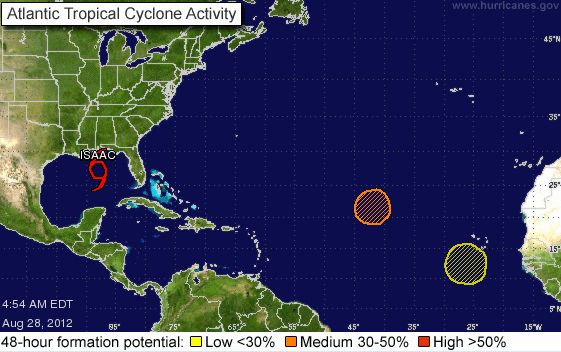 Isaac is getting a little stronger, but still taking its sweet time trying to get its act together. In other words, it’s not officially a hurricane yet, despite projections it would reach hurricane status yesterday. Maximum sustained winds at 65 mph with a pressure of 988 mb. The pressure has been slowly dropping, which indicates a strengthening tropical cyclone. The weather models are allowing us a better idea of where Isaac will make landfall, and, although there are uncertainties as shown in the quadruple chart below on this page, many signs point to southeast Louisiana on August 29, 2012. Yes, it will possibly make landfall near the same place Katrina hit back on August 29, 2005 … exactly 7 years later. 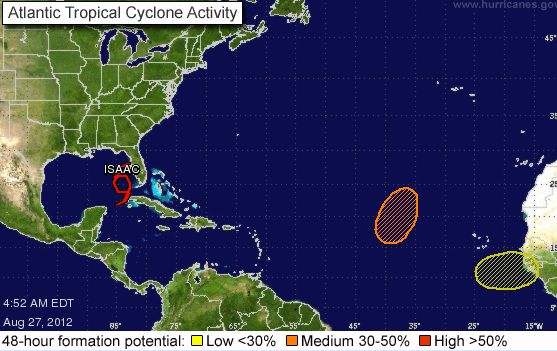 The outflow from the system is improving, which can be seen on satellite loops as the traverse banding expands to the western portions of the storm. Hurricane Hunters are already reporting that an eye is forming, which all points to the sign that Isaac is getting ready to become a Category 1 hurricane in the near future. The intensity forecast for Isaac is for the storm to become a hurricane later tonight (August 27) and push into southeast Louisiana as a strong Category 1 storm with wind speeds near 90 mph. Could this storm be stronger than 90 mph? Possibly.

It is important to note that Isaac is a large storm. Tropical storm force winds extend outwards up to 240 miles from the center. Large storms can take longer to organize and develop. Examples include Irene 2011, or even Ike 2008 when it pushed to the northwest in the Gulf of Mexico. We should not focus on the exact area of landfall because the effects of this storm will be felt over a large area of real estate. Large storms can push a lot of water to the coast, and if high tide occurs as Isaac makes landfall, southeast Louisiana, Mississippi, and Alabama coasts could see storm surges of 6 to 12 feet.

Many of the models have continued to shift Isaac’s projected path to the west yesterday (August 26) and today. However, the ECMWF, a European model and generally considered one of the best for hurricanes, holds out for a landfall further to the east, along the extreme western end of the Florida Panhandle. The GFS model, which has done very well this season and with the track of Isaac so far, forecasts a landfall near south-central Louisiana with the storm hugging the coast line and moving to the northwest into Texas. Here is a landfall comparison of four of the most reliable models, as of yesterday afternoon. Click here to enlarge.

Flooding will be the main story from Isaac, and it will produce a lot of it. If you are in the northeast side of the storm, you will experience the heaviest rains, winds, and have an increase threat for isolated tornadoes. With that said, parts of the Mississippi/Alabama coast could experience rainfall totals exceeding 15-18 inches. Southeast Louisiana could see 6-10 inches. If the track pushes further west, then the rainfall amounts could increase across New Orleans.

Comparison of the track of Hurricane Katrina (2005, on left) and the projected path of Tropical Storm Isaac, which is expected to be a Category One hurricane later today. Click here to enlarge.

The last thing I leave you this morning are two forecasts track projections the National Hurricane Center has produced. The image on the left is the track forecast for Hurricane Katrina (2005) and the image on the right is the track forecast for Isaac (2012). Notice how eerily similar these images are? They are practically located in the same area (southeast Gulf of Mexico) and track is almost identical. What are the odds of Isaac striking in the same approximate location as Katrina in 2005? No one knows. Katrina was the costliest natural disaster, as well as one of the five deadliest hurricanes, in the history of the United States. But please do remember that, among recorded Atlantic hurricanes, it was the sixth-strongest overall. Isaac is not even a hurricane yet, and is expected to be much less powerful when it makes landfall.

One other thing to note: the “cone of uncertainty” was much larger in the 2005 version than it is today. This narrower cone of uncertainty illustrates the fact that, in seven years, we have improved in forecast ability. The science is really improving, despite the uncertainty of where Isaac will go.

Bottom line: Tropical Storm Isaac has not reached hurricane status yet, but it’s expected to be a Category One hurricane when it makes landfall in