Everyone from Houston, Texas east to Tallahassee, Florida should watch Isaac closely. Hurricane Watch issued for part of northern Gulf of Mexico coast.

By early Sunday (August 26), Isaac had sustained maximum winds of 65 mph with a pressure of 995 mb. In other words, Isaac became slightly stronger last night as winds increased by 5 mph with the pressure dropping. Satellite appearance still shows a disorganized storm, although you can clearly see the spin and center of the circulation. The U.S. National Hurricane Center issued hurricane warnings for an area stretching from Louisiana to the Florida Panhandle Sunday, and the forecast for Sunday is clear: Isaac will continue to push to the northwest. However, the future track after Monday night is not certain. The models have shifted west. New Orleans might now be in the path of the storm, although it might also pass to either side of New Orleans. Everyone from Houston, TX east to Tallahassee, FL should watch Isaac closely. Thursday, I was thinking of a possible landfall near Mobile, AL. As of early today, my thinking has not changed.

Meanwhile,the Republican National Committee released a statement on Saturday evening (August 25), saying that due to concerns related to Isaac, Monday events in Tampa are canceled. Party Chairman Reince Priebus said in the statement the convention will convene Monday and “immediately recess until Tuesday afternoon.”

Hurricane safety: Are you prepared for a hurricane?

Another large question mark remains: Where will Isaac go after it makes landfall along the Gulf coast? The further west track will likely lower our precipitation totals, but for now, I still expect unsettled weather Tuesday and through most of the week. If Isaac feels the trough, it will travel to the north and then move northeast. The westerly trends in the models are simply disturbing as they show an intensifying hurricane pushing into Louisiana (New Orleans) and the Mississippi coast. Obviously, this is a bad scenario. Hopefully, this westward track does not continue and models shift slightly east. Due to the high uncertainty of where Isaac will make landfall, the National Hurricane Center has issued a hurricane watch for portions of the Gulf coast that includes the mouth of the Mississippi River eastward to Indian Pass, Florida. This watch does not include the metropolitan of New Orleans.

The most troubling part of this forecast is that conditions will continue to become more favorable for intensification as Isaac pushes into the Gulf of Mexico. The National Hurricane Center has a forecast intensity of a strong Category 2 hurricane with winds near 105 mph in 72 hours. Intensity forecasts are difficult to determine, but there is a chance Isaac could become stronger. Expect Isaac to organize today, and it could become a hurricane later this evening.

Bottom line for August 26, 5 a.m. EDT (9 UTC). Once again, everyone along the Gulf of Mexico coast from Houston, Texas to Tallahassee, Florida should closely watch Tropical Storm Isaac, which is expected to become a hurricane later today. Isaac is a large system, and its impact will be felt hundreds of miles away from the center of the storm.

Here’s an animated image of Isaac.

On August 21, 2012, Tropical Storm Isaac, the 9th named storm of the currently active 2012 Atlantic Hurricane season formed in the central Atlantic Ocean. Isaac is becoming a huge threat to Haiti, Cuba, and the entire southeastern United States. Isaac has been a very tricky storm because until today, all of our most reliable weather models had this storm moving practically anywhere from the Texas coast and as far east as the eastern coast of Florida. Now, the models seem to agree on a general track (granted, I want to see a few more runs of consistency before I am completely sold on the basic track), but the intensity forecasts remains a large question mark. Where will Isaac go? How strong will the storm become? What kind of impacts will we see from this storm? In this post, we will go into detail on what makes this forecast rather complicated.

Here is the latest information on Tropical Storm Isaac: 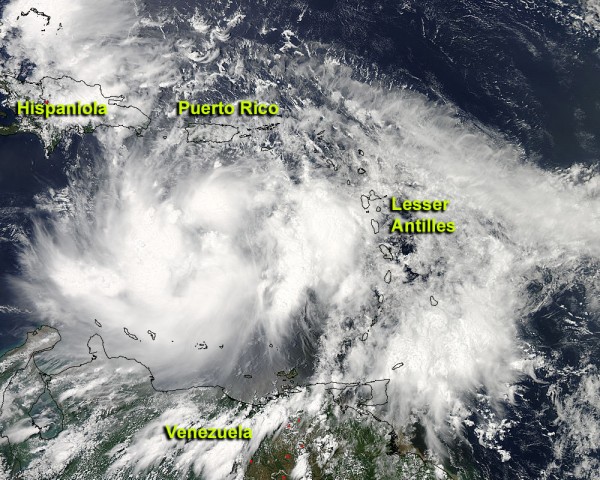 As of the 2:00 PM EDT advisory, here are the latest watches and warnings:

Hurricane Watch is in effect for Haiti, which means hurricane conditions are possible within the next 24-36 hours.

Tropical Storm Watch is in effect for Cuban Provinces of Matanzas and Cienfuegos, Andros Island, and Jamaica.

Here is a map that highlights the watches, warnings, and the possible track of Tropical Storm Isaac. This is the official hurricane forecast by the National Hurricane Center:

It is important to note that the National Hurricane Center issues a “cone of uncertainty” that shows possible tracks for this storm. Anyone in this cone should monitor the progress of Isaac as it pushes to the northwest for the next several days.

Why is this a complicated forecast?

The most complicated part of this pattern is determining how land interaction will affect Isaac. As of now, the northwest turn is taking place with Isaac, and the storm will have to encounter parts of Haiti and Cuba. The land interaction will likely weaken the storm, and it could allow the system to have a western push instead of going directly to the north-northwest. Another part of the forecast that makes the track questionable has to do with the interaction of a ridge (bubble of high pressure) in the Atlantic and a trough (area of low pressure) across the Rockies that will push east. These larger weather features really help determine the track of the storm. For instance, pretend you have two bubbles. One bubble is to your left, and the other is to your right. You are moving to the bubbles, but you cannot directly push into the bubble. What do you do? You go between them. This is a perfect example of what will likely happen with Isaac. The question is how strong are these “bubbles” and will these bubbles drift to the east or west? If we can determine that, it will help us determine the track of Tropical Storm Isaac.

As of now, I am leaning towards a track that will steer Isaac as far west as Mobile, Alabama and as far east as the eastern coast of Florida where Isaac could possibly impact parts of Miami. If the storm emerges into the eastern Gulf of Mexico, it will have a longer time over water and it will be over sea surface temperatures that are extremely warm and will act as gasoline on a fire and help strengthen Isaac. Intensity forecasts are difficult to forecast, and anything can happen. As of now, I doubt this storm will become a major hurricane thanks to all of the land interaction that will occur. Also, the storm is fairly large, and larger systems typically take longer to organize and develop. Of course, you can never rule anything out. With that said, let’s continue to watch and monitor Isaac as it pushes to the northwest. 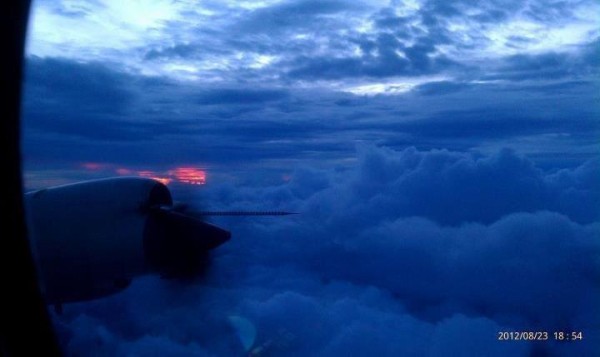 Isaac’s structure has improved this morning with decent outflow and transverse banding along the western and southern portions of the system. The pressure levels are falling, and the wind speeds have increased. The weather models should begin to get a better idea of where Isaac will travel thanks to NOAA. On August 23, 2012, NOAA was able to release a synoptic (big picture of our weather on a large scale) surveillance mission by the NOAA G-IV Jet aircraft. The goal behind this mission was to collect atmospheric observations that would be gathered into our global weather models. This mission, along with extra weather balloons being released by local NWS offices, has allowed our models to get a better idea of where Isaac will travel. For instance, since this morning’s model runs, many of our reliable models have shifted the track of this system to the east instead of having it push into the central Gulf of Mexico.

The biggest threat from Isaac will be the heavy rain and flooding potential in Hispaniola, Cuba, and Florida. Rainfall totals could easily exceed ten inches in and along the track of this storm. People tend to focus on wind when we speak about tropical threats. However, wind is never the main threat when it comes to tropical systems. It is always about the flooding and storm surge. Isolated tornadoes are possible for areas located in the northeast quadrant of the storm. If the system pushes into the eastern Gulf of Mexico and nears the western coast of Florida, than Florida and Georgia will have a heighten risk for tornadoes. As of now, southern Florida could feel impacts from Isaac as early as Sunday.

Bottom line: There are still plenty of questions that will help us determine the track and intensity of Tropical Storm Isaac. One thing is certain: Isaac will impact the southeastern United States, and Florida will experience the brunt of the storm on Sunday, August 26. Everyone along the southeast coast in the “cone of uncertainty” should be prepared for Isaac. If you do not have a hurricane plan, now is the time to do so. We’ll provide updates on Isaac as it becomes a hurricane and as more information becomes available.

Hurricane guide: What is a hurricane and how to stay safe