Tropical Storm Gordon has made landfall

One death has been reported so far from the storm. Gordon’s winds were just below hurricane-force last night when it made landfall just west of the Alabama-Mississippi border. 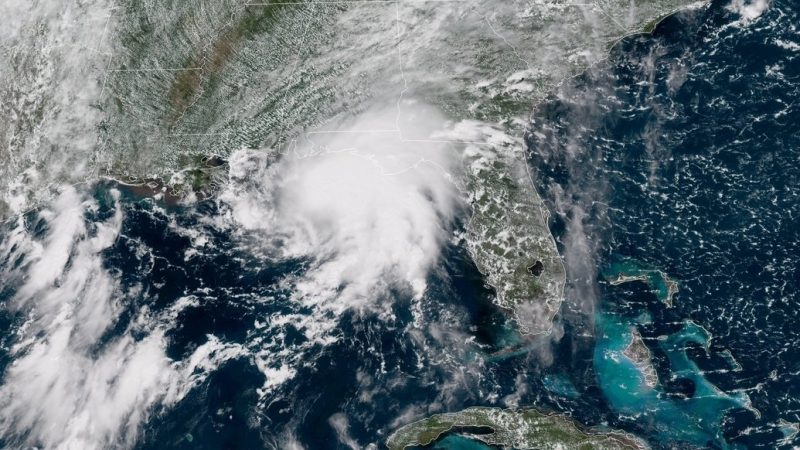 This satellite image is from shortly before landfall, around 1 p.m. CDT Tuesday. Image via NOAA/NESDIS Center for Satellite Applications and Research.

Tropical Storm Gordon made landfall along the U.S. Gulf Coast just before 10 p.m. Central Daylight Time, according to the National Hurricane Center. The landfall took place just west of the border between the U.S. states of Alabama and Mississippi. Sustained winds were at 70 mph (113 kph), just below hurricane-force. At least one death has been attributed to the storm; an oak tree fell on a mobile home in Pensacola, Florida – where the wind was gusting around 61 mph (98 kph) – reportedly killing a child.

Before a slight decline in wind speed, it was thought that Gordon would be the first Atlantic basin hurricane to make landfall in 2018.

The current path of the storm indicates it will move inland over the lower Mississippi Valley through Wednesday, bringing rain.

Although the center of #Gordon has moved north of the local area, feeder bands may still bring periods of heavy rainfall and isolated tornadoes. The graphics below show those threats are the greatest along the Mississippi Coast. #MSWX #LAWX pic.twitter.com/yyZaOl5CUz

In Alabama, about 10,000 power outages were reported, mostly along the coast.

Flash flood warnings went into effect over parts of the western Florida panhandle and southern Alabama. Forecasters were urging people along the Gulf Coast from Louisiana to Florida to be wary of storm surge and flash floods.

Looking at outer rain bands impacting Central Alabama this morning. Just looking at some wet roads. Can't rule out a small risk for an isolated severe storm this afternoon. Threat appears very low but it is a tropical system….we have to watch it. #alwx #WBRCFirstAlert pic.twitter.com/YtfsZGxtdr

Bottom line: Tropical storm Gordon has made landfall on the U.S. Gulf Coast.

Visit the Capital Weather Gang at the Washington Post