We still have plenty of time to monitor Tropical Storm Dorian before it hits any land areas. It is definitely a storm everyone should pay close attention to.

A strong area of low pressure emerged off the northwestern coast of Africa and quickly organized into Tropical Storm Dorian, the fourth named storm of the 2013 Atlantic Hurricane Season.

Currently, the storm has plenty of open water to traverse through before reaching any bodies of land. However, the general movement of the storm takes it near Puerto Rico, Dominican Republic, Haiti, and possibly into the Bahamas. The storm has been having trouble staying organized, as it fights wind shear and dry air. There is a high chance that this system will not hold together. Regardless, Dorian should still be watched.

As of Saturday, July 27, 2013 at 5 a.m. AST, Tropical Storm Dorian has sustained winds of 40 miles per hour and continues to push to the west at 22 mph. Dry air and wind shear has really taken a toll on Dorian as the storm attempts to travel near land. The National Hurricane Center believes there is a good change that the system will weaken into a tropical depression and eventually an open wave as it nears Hispaniola. Looks like gusty winds and heavy rains will be the main threat from Dorian as it continues to weaken.

Areas of where tropical cyclones typically form in late July based on climatology. Image Credit: NOAA

Typically in June and early July, tropical cyclones form close to home, with the Gulf of Mexico and Caribbean the most likely areas for development. However, by late July, and especially into August and September, the “wave train” begins to fire up off the northwest African coast. It is in this area where we have to watch for the “Cape Verde” storms that have the potential to organize into major hurricanes. 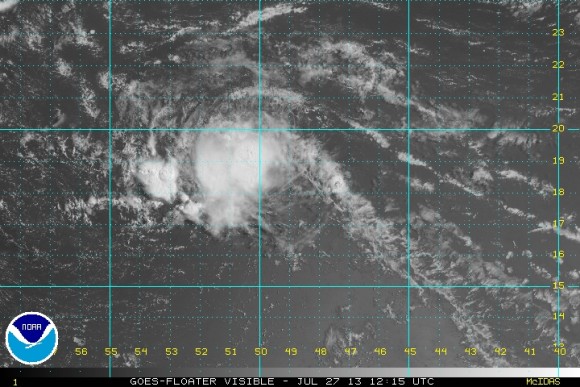 Bottom line: Tropical Storm Dorian continues to weaken as it pushes to the west and pushes closer to the Dominican Republic, Haiti, and eventually Cuba and the Bahamas. As wind shear and dry air continues to push into the system, Dorian will likely be downgraded to a tropical depression and eventually an open wave and will likely produce gusty winds and rain across Hispaniola. Everyone should continue to monitor Dorian just in case it intensifies, but as of now, it looks highly unlikely to strengthen.