Meteorologists said Hellen was likely to be “one of the most powerful tropical cyclones ever seen over the northern channel [of the southwestern India Ocean] since the satellite era (1967).” 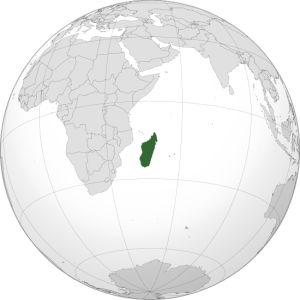 Location of Madagascar in the Indian Ocean. Image via Wikipedia

In the southwestern Indian Ocean today (March 31, 2014), a powerful cyclone is bringing dangerous storm surge, violent winds, and heavy rain that could result in flooding and mudslides in Madagascar, an island country in the Indian Ocean, off the coast of southeastern Africa. Tropical Cyclone Hellen peaked on March 30 with sustained winds around 150 miles per hour (240 km per hour). Hellen is a slow moving cyclone, so flooding will be a significant issue through Wednesday, April 2.

In the Indian Ocean, tropical cyclone season typically begins in November and ends in April every year. On average, 12.5 cyclones typically form in the Indian Ocean each year. As of 6 a.m. EDT ((10 UTC) on March 31, Hellen is roughly 240 nautical miles north-northwest of Antananarivo, Madagascar. Sustained winds are roughly around 100 to 120 knots, or approximately a Category 3 or 4 storm with sustained winds around 115-140 mph. Dry air has entered into the core of the cyclone, and a weakening trend is being detected through satellite. Although it will not hit as a Category 4 storm, it will still be formidable storm capable of producing significant damage. The strong winds from the storm will create a dangerous storm surge along the northwest coast of Madagascar as it pushes to the southeast. Since areas of low pressure spin clockwise in the Southern Hemisphere, winds and storm surge will be pushing onshore into Mahajanga, Boanamary, and even into Antonibe. Landfall has occurred across Mahajanga, Madagascar this morning. Mahajanga has a population of roughly 150,000 people. An area of high pressure nearby will slow the storm down which will enhance the rainfall in the region. The forecast track is for the storm to eventually push to the southwest and possibly make a second landfall somewhere across Mozambique. Of course, if the storm pushes further inland in Madagascar and encounters even more dry air, it could dissipate before making a turn towards Mozambique. 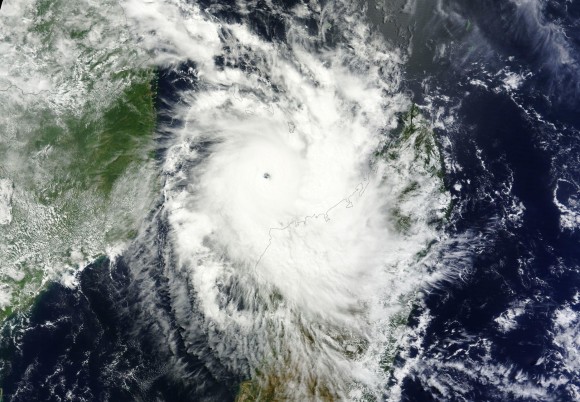 Cyclone Hellen as an intense Category 4 storm off the coast of Madagascar on March 29, 2014. Image via NASA

Yesterday (March 30), Hellen “bombed” out, meaning the central pressure dropped rapidly in a short period of time. According to Jeff Masters of Weather Underground, Hellen’s pressure dropped from 986mb at 1800 UTC Saturday to 925mb at 1800 UTC Sunday. For a storm to “bomb” out, pressure must drop 24 millibars in 24 hours. The fast intensification led to the following statements from the Joint Typhoon Warning Center and the Meteo France Tropical Cyclone Centre:

THE INHABITANTS OF THE NORTH-WESTERN COASTS OF MADAGASCAR EMBRACED FOR AN EXTREMELY DANGEROUS TROPICAL CYCLONE. ALL PREPARATIONS FOR A “WORST CASE” SCENARIO SHOULD BE UNDERWAY AS A LANDFALLING INTENSE SYSTEM BETWEEN CAPE SAINT-ANDRE AND MAHAJONGA IS STILL CLEARLY A POSSIBILITY.

Bottom line: Although the storm’s wind intensity and satellite appearance indicates a weaker storm, we warn you to not be fooled. Tropical Cyclone Hellen will still be a formidable storm capable of producing widespread flooding and a significant storm surge as high as 15 to 25 feet in Madagascar. Meteorologists said Hellen was likely to be “one of the most powerful tropical cyclones ever seen over the northern channel [of the southwestern India Ocean] since the satellite era (1967).”