Keeping an eye on Katia

Tropical Storm Katia could become 2011’s second major hurricane by Saturday. A weather system in the Gulf of Mexico could be named Tropical Storm Lee.

(August 31, 2011) The 2011 Atlantic hurricane season is far from over, and we are currently monitoring two areas of concern as of today.

For a September 5 update on Hurricane Katia, click here.

Tropical Storm Katia, the 11th named storm in the Atlantic, formed on August 30, 2011, in the eastern Atlantic ocean. Katia is far away from land, and we have days to monitor this system before it affects anyone.

Two areas of concern: The Gulf of Mexico (left) and Katia in the eastern Atlantic Ocean. Image Credit: NHC

The other concern is the stormy weather across the Caribbean (see image above).  Most of our reliable models forecast this area of storms to consolidate and develop into a tropical system somewhere in the Gulf of Mexico.  If this system develops, it will be named “Lee.”  Everyone along the Gulf Coast from Texas to Florida should keep a close eye on the potential of a tropical system developing this Labor Day weekend.

Tropical Storm Katia is a tropical storm with 65 miles per hour winds and a pressure of 994 millibars.  Katia is moving west-northwest at 21 mph. The name Katia, pronounced KAH-tyah, replaces the retired name “Katrina” back in 2005.  The National Hurricane Center (NHC) is forecasting Katia to become our second major hurricane of the 2011 Atlantic hurricane season by Sunday.

As of now, storms that develop in the far eastern Atlantic have a history of recurving out to sea before they strike the United States. I would give Katia a 70 percent chance of not hitting the United States.  However, if you live in Bermuda, I would monitor this storm very closely.  Here is the forecast track from the NHC: 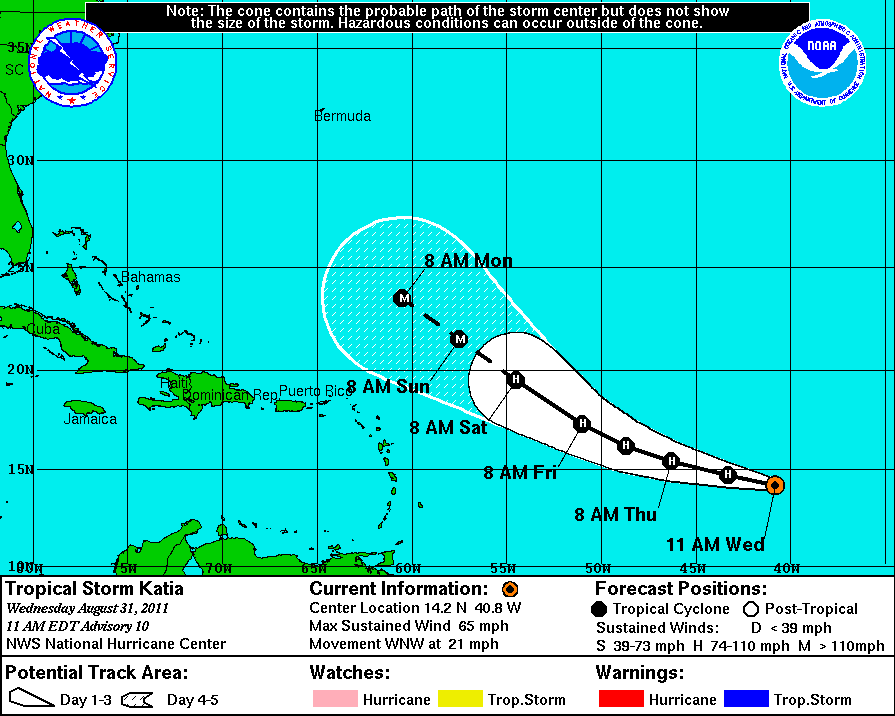 There is a possibility that Katia could push farther west instead of moving northwest and eventually northeast out into sea. Model runs this far out have a hard time predicting timing of troughs that come off the eastern United States.  Troughs, or extended areas of low pressure, act as a shield or force field for the United States. They literally pull tropical storms away from the North American continent.

The most reliable models forecast a decent trough to push off the eastern coast of the United States and sweep Katia with it.  However, it is possible that these troughs might not push in until later, and that could force Katia to push farther west towards the Leeward Islands.  We will know more by this weekend about the track of Katia. Until then, no worries in the near future. 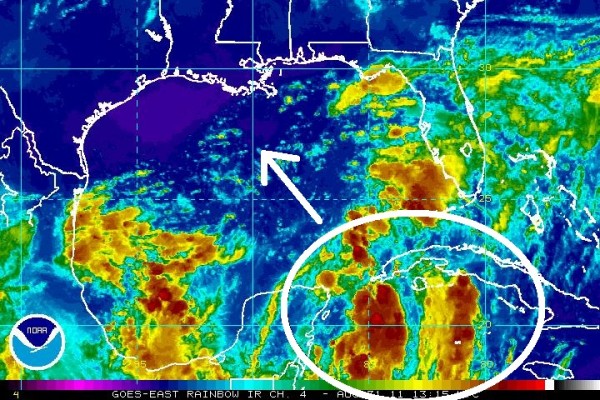 Unsettled weather in the Caribbean will push northwest into the Gulf of Mexico and could become our next tropical system.

Unsettled weather in the western Caribbean will eventually push to the northwest, and most of the reliable models predict this to become our next tropical system.  If it becomes a tropical storm, we will call this system “Lee.”

It is difficult to forecast strength and track when a system has not developed yet.  Many of the models have their own idea of how this system will develop.  The GFS model forecasts development in the northern central Gulf of Mexico this weekend around Louisiana and Mississippi.  Other models show this developing in the western Gulf of Mexico around Texas and Louisiana.

A cold front is expected to push south into the southern parts of the United States, bringing cooler air behind the front in five days.  This front will usher in cooler temperatures for parts of Texas, which has been experiencing temperatures over 100 Fahrenheit for months. By next Sunday or Monday, Texas could see temperatures drop from 100+ degrees to the low 90s.  As with any fronts, there is a possibility that it could bring a couple of thunderstorms for the area, something that Texas desperately needs.

Also, we will have to watch how this front interacts with a possible tropical system in the Gulf.  It is possible that a tropical system could provide beneficial rain for the southeast coastal parts of Texas.  It will be interesting to see how a tropical system interacts with a stalled front.  If something forms, it will likely push northeast along the stalled front.  For now, there are too many questions and not enough answers.  Could Texas see beneficial rains from what could become Lee? We’ll have to wait and see.

Hydrometeorological Prediction Center five-day rainfall total. Note: A lot of rain is in the forecast for the southern Gulf states (Texas, Louisiana, and Mississippi)

If you have Labor Day plans this weekend along the Gulf coast, keep all of this in mind. I would not change my plans as of now.

Bottom line: Tropical Storm Katia will become a hurricane today, will continue pushing to the northwest and could become a threat for Bermuda.  Unsettled weather in the Caribbean could become our next tropical system by this weekend for people in the Gulf.

EarthSky will keep you updated!

For a September 5 update on Hurricane Katia, click here.