MIT researchers show that neutrinos can change between several distinct “flavors” while traveling from a facility near Chicago to a detector in Minnesota. 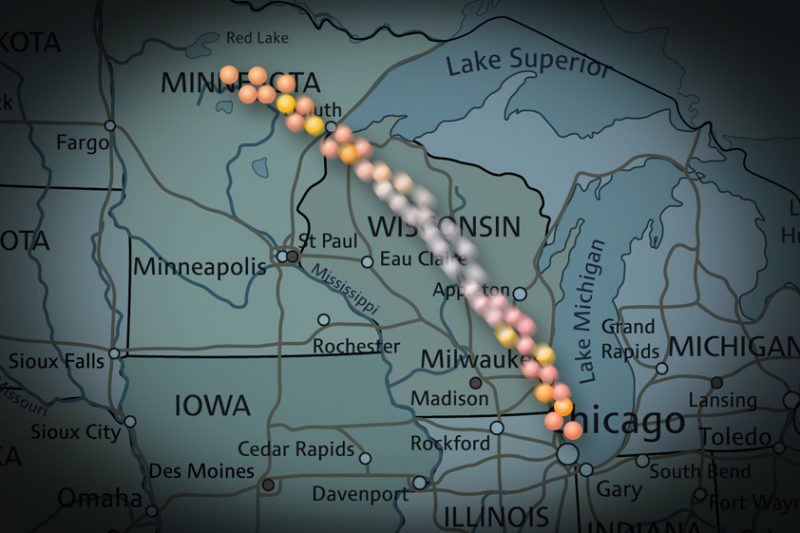 MIT researchers found that neutrinos changed between several distinct “flavors” as they traveled at close to the speed of light from a facility near Chicago to a detector in Minnesota, 456 miles (735 km) away. Image via Christine Daniloff/MIT

In the world of quantum, infinitesimally small particles, weird and often logic-defying behaviors abound. Perhaps the strangest of these is the idea of superposition, in which objects can exist simultaneously in two or more seemingly counterintuitive states. For example, according to the laws of quantum mechanics, electrons may spin both clockwise and counter-clockwise, or be both at rest and excited, at the same time.

The physicist Erwin Schrödinger highlighted some strange consequences of the idea of superposition more than 80 years ago, with a thought experiment that posed that a cat trapped in a box with a radioactive source could be in a superposition state, considered both alive and dead, according to the laws of quantum mechanics. Since then, scientists have proven that particles can indeed be in superposition, at quantum, subatomic scales. But whether such weird phenomena can be observed in our larger, everyday world is an open, actively pursued question.

Now, MIT physicists have found that subatomic particles called neutrinos can be in superposition, without individual identities, when traveling hundreds of miles. Their results, to be published later this month in Physical Review Letters, represent the longest distance over which quantum mechanics has been tested to date.

A subatomic journey across state lines

The team analyzed data on the oscillations of neutrinos — subatomic particles that interact extremely weakly with matter, passing through our bodies by the billions per second without any effect. Neutrinos can oscillate, or change between several distinct “flavors,” as they travel through the universe at close to the speed of light.

The researchers obtained data from Fermilab’s Main Injector Neutrino Oscillation Search, or MINOS, an experiment in which neutrinos are produced from the scattering of other accelerated, high-energy particles in a facility near Chicago and beamed to a detector in Soudan, Minnesota, 735 kilometers (456 miles) away. Although the neutrinos leave Illinois as one flavor, they may oscillate along their journey, arriving in Minnesota as a completely different flavor.

The MIT team studied the distribution of neutrino flavors generated in Illinois, versus those detected in Minnesota, and found that these distributions can be explained most readily by quantum phenomena: As neutrinos sped between the reactor and detector, they were statistically most likely to be in a state of superposition, with no definite flavor or identity.

What’s more, the researchers found that the data was “in high tension” with more classical descriptions of how matter should behave. In particular, it was statistically unlikely that the data could be explained by any model of the sort that Einstein sought, in which objects would always embody definite properties rather than exist in superpositions.

David Kaiser is the Germeshausen Professor of the History of Science and professor of physics at MIT. Kaiser said:

What’s fascinating is, many of us tend to think of quantum mechanics applying on small scales. But it turns out that we can’t escape quantum mechanics, even when we describe processes that happen over large distances. We can’t stop our quantum mechanical description even when these things leave one state and enter another, traveling hundreds of miles. I think that’s breathtaking.

The team analyzed the MINOS data by applying a slightly altered version of the Leggett-Garg inequality, a mathematical expression named after physicists Anthony Leggett and Anupam Garg, who derived the expression to test whether a system with two or more distinct states acts in a quantum or classical fashion.

Leggett and Garg realized that the measurements of such a system, and the statistical correlations between those measurements, should be different if the system behaves according to classical versus quantum mechanical laws. Kaiser explained:

They realized you get different predictions for correlations of measurements of a single system over time, if you assume superposition versus realism

“Realism” here refers to models of the Einstein type, in which particles should always exist in some definite state.

Formaggio had the idea to flip the expression slightly, to apply not to repeated measurements over time but to measurements at a range of neutrino energies. In the MINOS experiment, huge numbers of neutrinos are created at various energies, where Kaiser says they then “careen through the Earth, through solid rock, and a tiny drizzle of them will be detected” 735 kilometers away.

According to Formaggio’s reworking of the Leggett-Garg inequality, the distribution of neutrino flavors — the type of neutrino that finally arrives at the detector — should depend on the energies at which the neutrinos were created. Furthermore, those flavor distributions should look very different if the neutrinos assumed a definite identity throughout their journey, versus if they were in superposition, with no distinct flavor.

“The big world we live in”

Applying their modified version of the Leggett-Garg expression to neutrino oscillations, the group predicted the distribution of neutrino flavors arriving at the detector, both if the neutrinos were behaving classically, according to an Einstein-like theory, and if they were acting in a quantum state, in superposition. When they compared both predicted distributions, they found there was virtually no overlap.

More importantly, when they compared these predictions with the actual distribution of neutrino flavors observed from the MINOS experiment, they found that the data fit squarely within the predicted distribution for a quantum system, meaning that the neutrinos very likely did not have individual identities while traveling over hundreds of miles between detectors.

But what if these particles truly embodied distinct flavors at each moment in time, rather than being some ghostly, neither-here-nor-there phantoms of quantum physics? What if these neutrinos behaved according to Einstein’s realism-based view of the world? After all, there could be statistical flukes due to defects in instrumentation, that might still generate a distribution of neutrinos that the researchers observed. Kaiser said if that were the case and “the world truly obeyed Einstein’s intuitions,” the chances of such a model accounting for the observed data would be “something like one in a billion.” Kaiser said:

What gives people pause is, quantum mechanics is quantitatively precise and yet it comes with all this conceptual baggage.That’s why I like tests like this: Let’s let these things travel further than most people will drive on a family road trip, and watch them zoom through the big world we live in, not just the strange world of quantum mechanics, for hundreds of miles. And even then, we can’t stop using quantum mechanics. We really see quantum effects persist across macroscopic distances.

Bottom line: MIT researchers announce that neutrinos can oscillate, or change between several distinct “flavors,” while traveling hundreds of miles. They obtained data from Fermilab’s Main Injector Neutrino Oscillation Search, or MINOS, sending neutrinos from a facility near Chicago to a detector in Soudan, Minnesota, 456 miles (735 km) away. Some neutrinos left Illinois as one flavor and arrived in Minnesota as a completely different flavor.