Banned chemicals from the 1970s have been discovered in the bodies of crustaceans in the deepest of Earth’s ocean trenches. 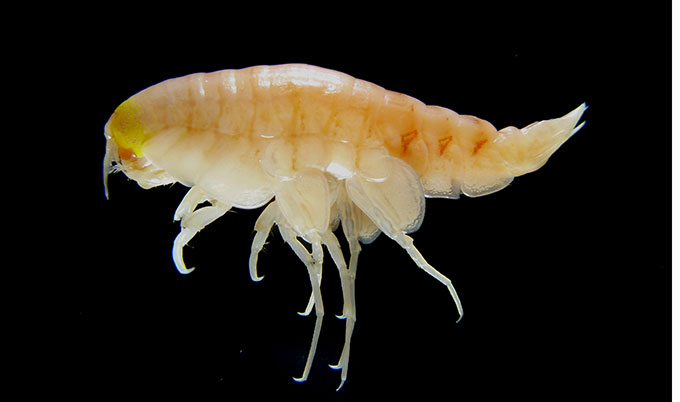 Hirondellea gigas are voracious scavengers that consume anything that comes down from the surface. Image via Alan Jamieson

Scientists have discovered human-made chemicals, banned in the 1970s, in the bodies of creatures living in the deepest parts of the Pacific Ocean. That’s according to a study published February 13, 2017 in Nature Ecology & Evolution.

The British research team sampled amphipods, a type of crustacean that live in the Pacific Ocean’s Mariana and Kermadec trenches. The team used deep-sea landers bring up samples of the organisms that live in the deepest levels of the two trenches – which are over 10 kilometers (6.2 miles) deep and 7,000 kilometers (4,350 miles) apart.

They found extremely high levels of Persistent Organic Pollutants – or POPs – in the organism’s fatty tissue. These include polychlorinated biphenyls (PCBs) and polybrominated diphenyl ethers (PBDEs) which were commonly used as electrical insulators and flame retardants, until they were banned in the 1970s. 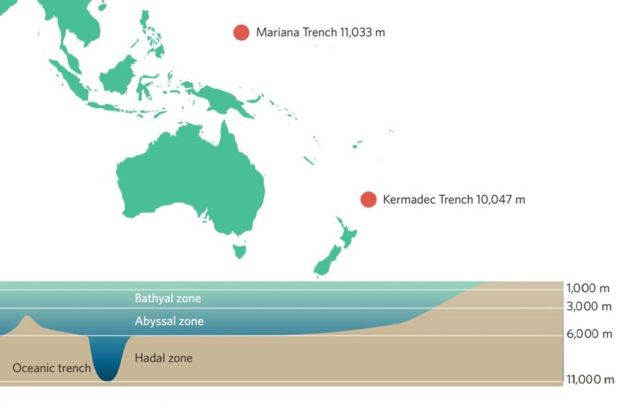 Newcastle University’s Alan Jamieson is the lead author of the study. He said in a statement:

We still think of the deep ocean as being this remote and pristine realm, safe from human impact, but our research shows that, sadly, this could not be further from the truth.

In fact, the amphipods we sampled contained levels of contamination similar to that found in Suruga Bay, one of the most polluted industrial zones of the northwest Pacific.

What we don’t yet know is what this means for the wider ecosystem and understanding that will be the next major challenge.

From the 1930s until PCBs were banned in the 1970s, the total global production of these chemicals was around of 1.3 million tonnes (1.43 million tons). Released into the environment through industrial accidents and discharges and leakage from landfills, these pollutants are invulnerable to natural degradation and so persist in the environment for decades.

How did the pollutants get down into the deepest parts of Earth’s oceans? They most likely found their way to the trenches through contaminated plastic debris and dead animals sinking to the bottom of the ocean, the authors suggest, where they were then eaten by small creatures, which in turn become food for larger creatures. The pollutants accumulate through the food chain, so that by the time they reach the deep ocean, concentrations are many times higher than in surface waters. Jamieson said:

The fact that we found such extraordinary levels of these pollutants in one of the most remote and inaccessible habitats on earth really brings home the long term, devastating impact that humankind is having on the planet. It’s not a great legacy that we’re leaving behind.

Read more from researcher Alan Jamieson:
How we discovered pollution-poisoned crustaceans in the Mariana Trench

Bottom line: Human-made chemicals banned in the 1970s have been found in the deepest trenches of the western Pacific Ocean.