Satellite view makes clear how unlucky the 150 people of the town of Fairdale were on April 9. 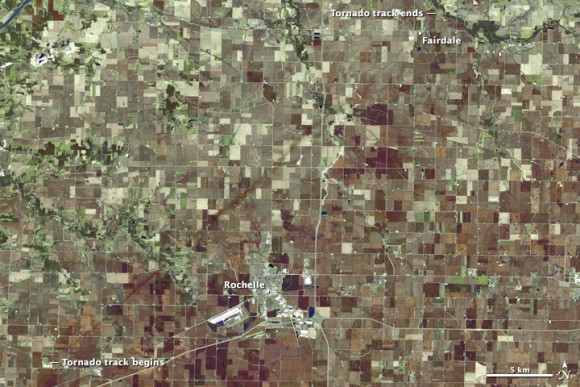 After a powerful EF-4 tornado barreled through the farming community of Fairdale, Illinois, on April 9, 2015, homes were transformed into chaotic piles of wood, trees were left coated with tufts of insulation, and cars were strewn about like a child’s toys.

NASA’s Landsat 8 satellite acquired the above image of the tornado’s aftermath on April 10. Evidence of the Fairdale tornado appears as a brown line of damaged vegetation and disturbed soil scrawled across the agricultural landscape.

To make it easier to distinguish the tornado track from surrounding fields, this false-color image combines shortwave infrared, near infrared, and green light (OLI bands 7-5-3). Living vegetation appears green and fallow or newly planted farm fields are shades of brown.

The satellite view, as well as the map below, makes clear how unlucky the 150 people of Fairdale were. The tornado track fades away just a few kilometers northeast of Fairdale, suggesting the community nearly escaped even worse damage. The town of Rochelle, in contrast, was far enough south of the tornado to avoid its wrath. According to news reports, two people were killed in Fairdale, 20 people were injured, and 70 homes were destroyed. 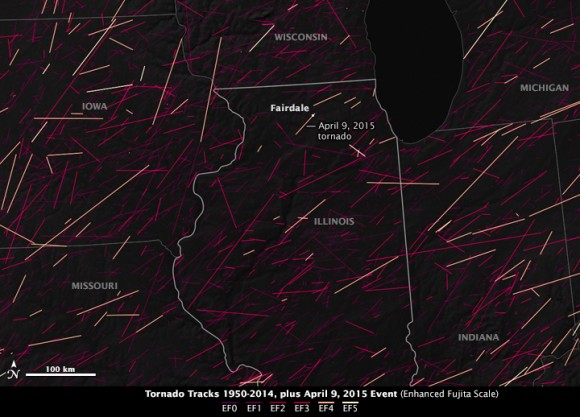 Records of historical tornado tracks show that EF-4 and EF-5 tornados (the most potent) are uncommon in northern Illinois, but they do occasionally occur. The map above, based on data from the NOAA/National Weather Service’s Storm Prediction Center, shows the location of all the major tornados that have affected northern Illinois between 1950 and 2014. EF-5 tornados are shown in white, EF-4 are pink, and EF-3 and below are shades of purple. (Note: The 2015 April 9 event was not included in the NOAA database and was digitized using the Landsat scene.) 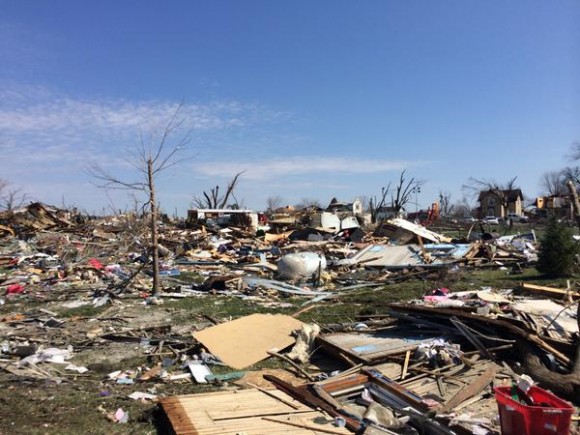 Bottom line: Satellite image show the track of the powerful EF-4 tornado that barreled through the farming community of Fairdale, Illinois, on April 9, 2015.