Tornado outbreak in Alabama and US Southeast on January 22-23

A strong low pressure system pushed into the southeast on January 22-23, 2012 and triggered numerous severe thunderstorms and tornadoes that killed three people.

Radar image of the storms firing up across Arkansas on January 22, 2012. Image Credit: National Weather Service

On January 22, 2012, a strong area of low pressure associated with a negatively tilted trough pushed into the southeastern United States. A cold front, which had pushed into these areas a few days ago, stalled across the coastal areas near the Gulf of Mexico. South of this border, warm and tropical air engulfed the region. Ahead of the front, cooler and stable weather conditions existed across northern Alabama, Mississippi, and Tennessee. However, the fast movement of this negatively tilted trough was able to push this stationary front along the gulf coast states to advance northward as a strong warm front. It brought very warm and moist air to the southeast providing enough shear and instability to help trigger the development of severe thunderstorms. The storms fired up across central Arkansas late Sunday evening on the 22nd, and these storms quickly became supercellular capable of producing a tornado. This storm was very dynamic as strong winds in the upper levels of the atmosphere was able to help sustain and promote thunderstorm development, even in areas that were not considered to be as unstable as others.

Take a look at the tornado damage across Alabama on January 23, 2012: 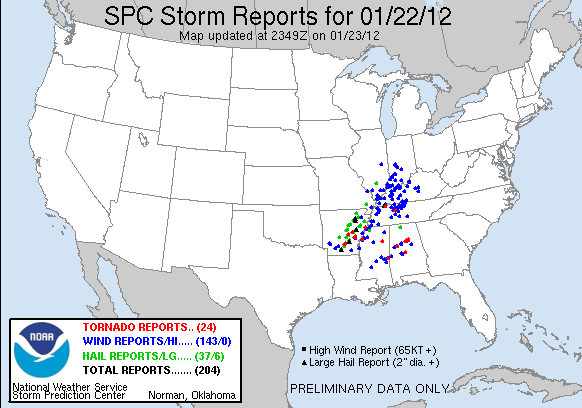 In the map above, nearly 24 reports were tornado related. These storm reports are based on hail (green), wind (blue), and tornado (red) related damage or occurrences across the southeast. Wind damage was most common damage as 143 out of the 204 total reports were contributed by this storm. Tornado outbreaks are typically rare in the month of January, but not unusual. A positive North Atlantic Oscillation (NAO), which helps prevent cold air to move across the eastern United States, and a La Nina, which typically supports drier and warmer conditions across the southeast were major contributors for the overall setup of this system. Unusually warm temperatures clashed with colder temperatures from the north, and winds racing over 80 knots (90 miles per hour or higher) provided a lot of lift and helped provide these storms to blossom into monsters. 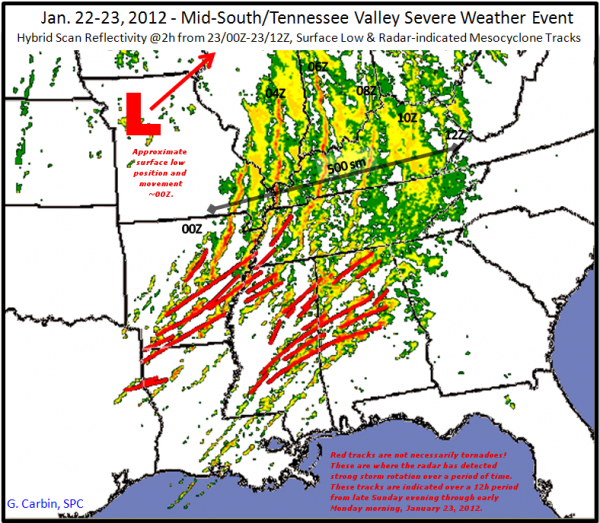 This image shows the tracks of storms with decent storm rotation. (Does not show tornado tracks)Image Credit: C Carbin from the Storm Prediction Center

These storms provided produced significant damage across Arkansas and especially Alabama. Some of these storms even produced long-track tornadoes that stayed on the ground for many miles. The hardest hit area was across Alabama as the storms moved in during the early morning hours of 2 AM CST through 7 AM CST. As of now, many of the tornadoes that formed were rated an EF2, which is fairly significant because ratings of EF-2 or higher are considered “strong” tornadoes. The storm that pushed north of Birmingham, Alabama produced an EF-3 tornado with wind speeds estimated around 150 mph. This tornado affected parts of Jefferson county and caused a lot of damage across the city of Clay. As of now, two confirmed deaths were reported from this tornado. At least three deaths were reported from this event, and over a hundred people were injured.

One of the deaths occurred in Clay, Alabama when a 16 year old girl was picked up from her house and thrown 40 feet from her house. Christina Nicole Heichelbech was found dead on her mattress by her father.

“She just looked like she was sleeping like a baby,” her father, Darrell Heichelbech, said through tears this afternoon. “But she wasn’t sleeping. She was gone. I didn’t see any movement,” he said. “A couple of nurses did CPR for 15 or 20 minutes, but there was no response.”

Christina Nicole Heichelbech was a junior at Jefferson County International Baccalaureate, and recently scored a 30 on her ACT.

This event was seen well in advance as the Storm Prediction Center released a slight risk area for parts of the southeast on their Day 3 outlook, which was released on Friday, January 20, 2012. They mentioned that “tornadoes and damaging winds will be the primary severe weather hazards with supercells and line segments forming along and ahead of the cold front”. By the day two outlook, the SPC mentioned the strong dynamics with this system and hinted that a moderate risk would be issued for the day one outlook on Sunday, January 22, 2012. I wrote up a post about this situation Sunday morning, mentioning that some of the tornadoes could be strong and that everyone should be ready for overnight storms as they push east. Warnings were issued well in advance of this storm system as the National Weather Services provided a lead time of 34.4 minutes.

Helicity values, which indicates the spin in the atmosphere and contributes to tornado development was extremely high in this event. Helicity values around 200-300 is sufficient enough to aid in tornado development. However, in this event, values were exceeding 600-700. The significant tornado parameters spiked at a 5 across portions of Mississippi and Tennessee and a 3 across Alabama. Values over 1 are considered to be significant for tornadoes. In a way, you could compare the tracks of these tornadoes in Alabama to the tracks of the April 27, 2011 tornadoes. The storm that pushed north of Birmingham was slightly further north than the Tuscaloosa/Birmingham tornado that produced an EF-4 tornado on April 27, 2011. This storm system was eerily similar to the Super Tuesday Outbreak on February 6, 2008. Take a look at the setup of these two storms. They were practically formed in the same areas and were both negatively tilted: 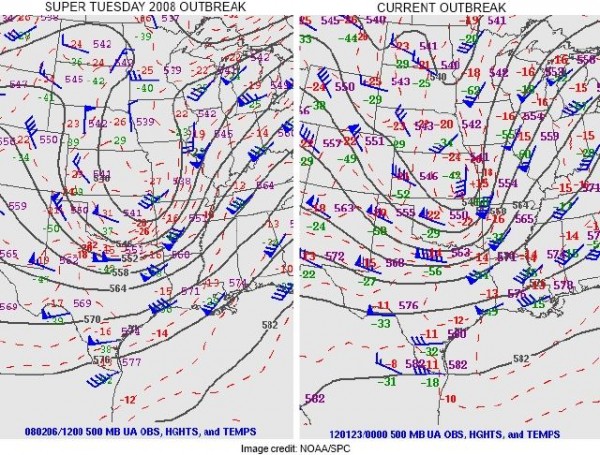 The National Weather Service in Birmingham, Alabama will continue to estimate the extent of the damage today as they will assess the track, path, and strengths of these tornadoes. As of now, the NWS confirmed an EF-3 tornado with 140 mph winds in Koffman, Alabama. An EF-2 tornado with 115 mph winds was confirmed around Watermelon Road in Alabama. The Jefferson county tornado produced an EF-3 tornado with 150 mph winds. The length of this track is unknown, but it will likely be one of the long track tornadoes that they will identify today when they survey the damage. An EF-2 tornado hit Fordyce, Arkansas and caused structural damage north of Kingsland, Arkansas. Hail reports were significantly large from this event. Baseball sized hail was reported in Monroe, Lincoln, and Jackson counties in the state of Arkansas. 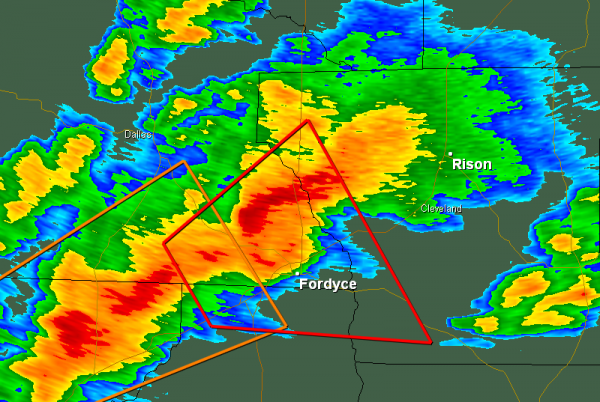 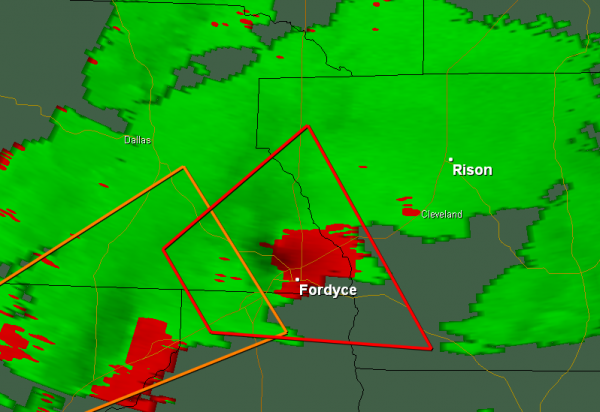 Here are more radar imagery taken from the storms near Maplesville, Alabama where more tornado damage was reported. The NWS will survey this area today to find out the strength of this tornado: 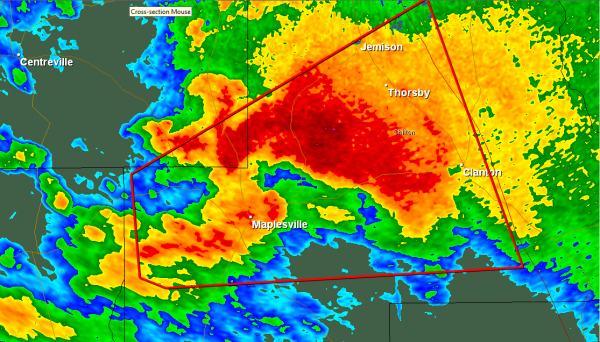 Reflectivity image of the Maplesville, Alabama tornado on GR2 Radar. 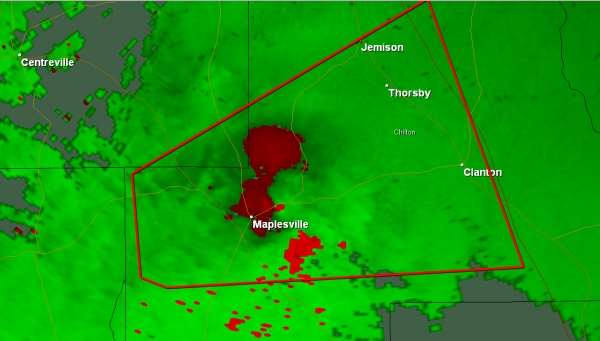 Velocity image of the Maplesville, Alabama tornado on GR2 Radar.

Bottom line: Hundreds of people were injured as these storms pushed through Arkansas, Mississippi, Tennessee, and Alabama. The hardest hit areas occurred in Alabama where strong EF-2 and EF-3 tornadoes formed north and south of Birmingham. Wind damage was the most common damage report, especially around Kentucky, Indiana, and Illinois. At least three people died, and we will know more about injuries, deaths, and damage today as the NWS surveys the damage and tornado tracks. This tornado outbreak was rare for the month of January, but it was not unusual as we have seen tornado outbreaks occurred in the winter months. Remember, tornadoes can happen at any time of the year, especially in the United States. Severe weather and tornado season officially begins in March and peaks in the months of May and June across the central portions of the United States. It is still too soon to know whether or not 2012 will bring us an active season of severe weather. If anything, the event that occurred on January 22-23, 2012 is an eye opener that makes you realize the true power of mother nature. All prayers go out to all of the victims and families across these states.

You can nominate me for a social media award in weather too. I’m currently ranked 8th, and would love to have your vote: