A cold front pushing through the eastern U.S. on October 13, 2011, brought severe weather which produced these small tornadoes in Virginia.

A strong cold front pushed into the eastern United States on October 13, 2011. For portions of central Georgia and Virginia, some storms were strong enough to produce wind damage and weak tornadoes. A lot of people uploaded videos of a tornado crossing Interstate 95 in Virginia. Here’s a quick highlight of what happened yesterday across the United States: 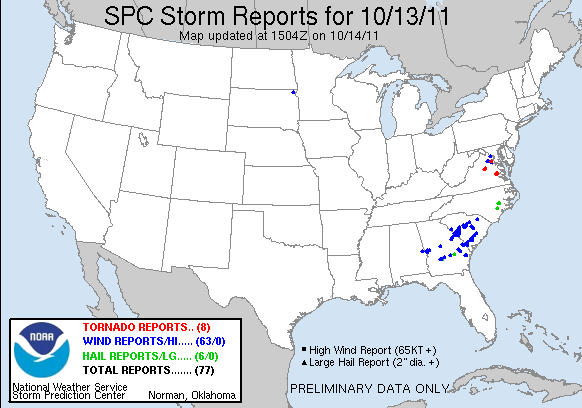 The tornado hit around 5:30 p.m. on Thursday, October 13, 2011, in Quantico, Prince William County, Virginia. There were reports of some minor damage including shingles removed from roofs and uprooted trees.  Based on the damage and the videos posted on YouTube, the strength of the tornado was likely an EF-1, producing winds around 80 miles per hour.  A large trough (extended area of low pressure) pushed into the eastern United States, providing enough moisture and spin in the atmosphere to produce small tornadoes across the mid-Atlantic states.

On a bright note, the weather is great now that the front has pushed through portions of the Southeast. After the storms pushed through my area, I was able to capture this large rainbow in North Georgia:

Rainbow in North Georgia after showers and a few thunderstorms pushed through the area. Image Credit: Matt Daniel

Overall, a cold front pushed through the eastern United States on October 13, 2011, bringing severe weather across Virginia which produced small, weak tornadoes. Fortunately, damage was minor.  The people on Interstate 95 were very lucky the tornado was weak as it crossed the highway during rush hour.