According to media reports, Venice, Italy is still accessing damage today from a tornado that struck several islands in the lagoon surrounding of the city on Tuesday, June 12, 2012. The tornado – which narrowly missed Venice itself – developed over the Sant’Erasmo island in Venice’s lagoon. Dozens of boats were piled up by the wind as the tornado pushed ashore. At least 12 houses in the lagoon had their roofs ripped off by this tornado. Many trees were snapped and uprooted as the tornado pushed across Sant’Elena and Certosa islands. Fortunately, no injuries or deaths were reported from this twister as it pushed through the Venice, Italy lagoon. Take a look at the images and video people filmed as the tornado pushed through water and over land. 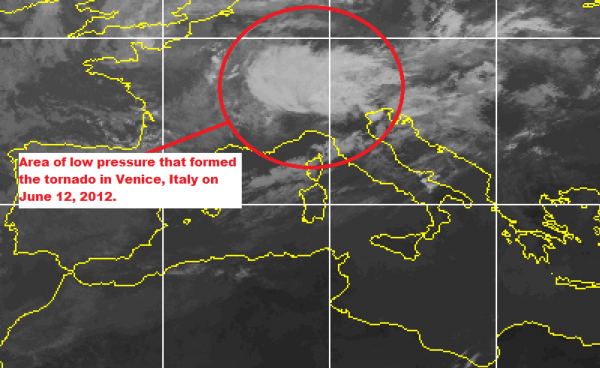 While tornadoes themselves are considered to be rare, tornadoes in parts of Europe are not too uncommon. The United States is still the number one country for tornadoes due to the geography of the region (Rocky Mountains and the Gulf of Mexico). The tornado that formed in Venice, Italy looks larger than what a typical waterspout would show, and is likely associated with a more significant storm than a pulse storm forming off a boundary layer. In fact, on radar and satellite imagery, it looks likes an extratropical cyclone/shortwave pushed southeast into northern Italy and eventually pulled northeast away from Italy late on June 12, 2012. The system likely had enough wind shear and instability to develop a tornado in this region.

Bottom line: Although tornadoes are rare themselves, tornadoes in parts of Europe and Italy are not too uncommon. Regardless, it was rare sight to see as residents took video and pictures of this large tornado as it pushed through Sant’Elena and Certosa island. Trees were snapped and 12 houses reported roof damage. Fortunately, no one was hurt or injured. As of now, residents in the area are helping out by cleaning up the debris across the areas that were hit by this tornado on Tuesday, June 12, 2012.