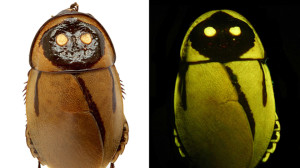 Photograph of a new, light-mimicking cockroach Lucihormetica luckae in daylight and under fluorescent light. Notable are two luminescent lanterns and one minor asymmetrical lantern on the right side. The species is likely extinct — its only known habitat was destroyed by the eruption of Tungurahua in December 2010.

Thank you! Your submission has been received!
Oops! Something went wrong while submitting the form.
END_OF_DOCUMENT_TOKEN_TO_BE_REPLACED