To smash or to spear? The mantis shrimp dilemma

It’s no secret that mantis shrimp are awesome animals.

Bad attitudes aside, the aggressive aquatic predators’ many impressive features have made them the darlings of nature videos and public radio science programs alike. Perhaps you’ve heard about the critters’ shatter-proof arms, or their unparalleled color vision, or their patented spring-loaded super punch. Certain species of mantis shrimp can deliver a blow so powerful that they’ve been known to bust through their glass tanks (possibly not making them the best choice for anyone stocking a home aquarium). The key to the crustaceans’ knockout punch is speed. In addition to ordinary muscles, their arms contain special structures that allow them to store and rapidly release energy in brutal spring-loaded strikes. The walloping punches of these “smashing” species of mantis shrimp have been measured at up to 23 meters per second (that’s about 50 mph, and let me remind you that this is all happening underwater).

But the majority of mantis shrimp species aren’t smashers, they’re “spearers”. While structurally very similar to smashers, spearers differ in the tips of their arms (smashers accessorize with a closed club-like fist, spearers an open, barbed snare) and also in their style of hunting. Smashers hunt by leaving their burrows, seeking out sedentary hard-shelled prey, and then beating the crap out of them to expose the soft, tasty interior. Spearers, on the other hand, are ambush predators. They dine on soft, fast-moving prey, which they catch by quietly lurking in their burrows and then pouncing once the prey is within striking distance. Ambush predators don’t necessarily need to be able to outrun their prey, but they do rely on quick bursts of speed to execute a successful lunge before their meal wises up and runs/swims for the hills (think of frogs snatching insects with their quick-flicking tongues). 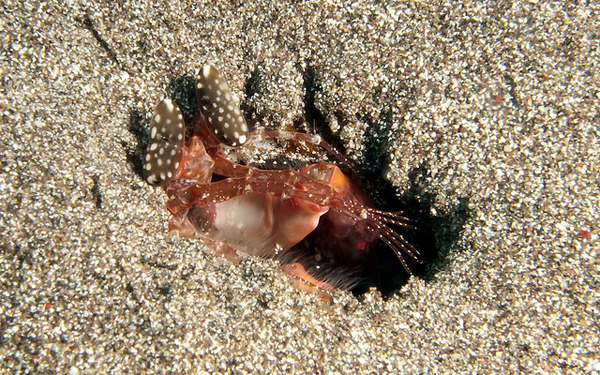 A spearing mantis shrimp waits in the shadows. Image: prilfish.

So if smashing mantis shrimp can pump their fists at 50 mph, just imagine how fast the ambushing spearers can attack their prey. Okay, stop imagining, because it turns out the spearers are actually slower than the smashers. I know, I was surprised too, as were the scientists measuring the animals. In a study published in the Journal of Experimental Biology researchers measured the striking speeds of two species of spearing mantis shrimp of drastically different sizes. Diminutive Alachosquilla vicina are only a few centimeters long, while Herculean Lysiosquillina maculata can grow to ten times that length. After measuring animals both in the lab and in the wild, the fastest of the spearers only clocked in at around 6 meters per second (13 mph). Big deal, right? I can go faster than that on a bicycle (though possibly not underwater).

Another surprising finding was that the smaller species of spearer (A. vicina), with its wimpy little arms, had a faster blow than the hefty L. maculata. But even the fastest of the spearers still trailed well behind the smashers. What gives, spearing mantis shrimp? How the hell do you expect to get your lunch with those sluggish strikes?

I mentioned earlier that spearers and smashers share many anatomical traits. That includes the components needed to produce that forceful spring-loaded strike. However not all species appear to use these tools. The researchers found evidence of springy strikes in smaller, speedier A. vicina, but larger, slower L. maculata seemed to be relying exclusively on muscle movement to catch their prey. So spearing mantis shrimp can be further divided into springy and non-springy varieties, whereas the smashers uniformly utilize springy strikes. But that still leaves us with a lot a “whys”. Why are the small, spring-loaded spearers still slower than smashers? And why are the larger spearers catching their prey with brawn alone while leaving their amazing springing mechanisms to (figuratively) rust? 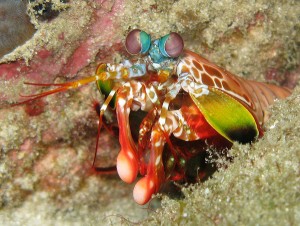 A peacock mantis shrimp, the most smashing of the smashers. Image: prilfish.

You might be formulating a hypothesis about increased size making it harder to spring into action. Don’t bother. Smashing mantis shrimp can grow quite large as well, and this doesn’t prevent them from unleashing spring-powered assaults. The answers have more to do with how much speed is required to perform a task, rather than how much is physically possible to produce. Beyond a certain point, additional speed could simply be overkill for ambush predators. After all, they just need to be quick enough to keep their prey from escaping, they’re not trying to set a new world record. But for the pummelers, more speed = more force = more smashy goodness.

The authors also note that there can be a tradeoff between speed and accuracy. This might explain the difference in striking speeds between the large and small spearers. A faster lunge may be less precise at hitting its target. Larger species of spearing mantis shrimp have longer arms, and thus a longer reach. This allows them to go after prey that’s further away, which also means there’s a greater chance of missing the mark. So larger spearers might do well to invest in accuracy over speed. But smaller spearers, with their proportionally smaller arms and shorter reach, can afford to be a little looser with their aim. It’s fine to go ahead and engage the springs then. And smashers, of course, are pounding their prey at point blank range. It’s not going anywhere. Their best strategy is to go full speed ahead with the spring-loaded artillery and smash, smash, SMASH!