The Meadow fire in Yosemite National Park is still burning, but nearly 100 percent contained now. This video by QT Luong shows the beauty and terror of wildfire.

QT Luong sent us this video, a timelapse of the Meadow fire that began earlier this month and has been burning in Yosemite National Park. He wrote in an email:

In the past, several wildfires have burned at the periphery of Yosemite National Park; however, when the Meadow Fire flared up on September 7, 2014, it was the first time in memory that a major wildfire occurred in the scenic heart of Yosemite, next to Half-Dome.

He explained in his blog:

Sierra Nevada forest fires are part of the cycle of nature. Lightning started one such fire weeks ago within the designated wilderness of the Yosemite National Park, in Little Yosemite Valley between Half Dome and Mount Starr King. On Sunday afternoon (September 7, 2014), fanned by high winds, it exploded all of a sudden, belching plumes of smoke that could be seen from as far as Reno.

All trails starting from Happy Isles, including Mist and Half-Dome closed down. More than 100 hikers had to be evacuated, many of them by an helicopter airlift from the top of Half-Dome.

The Meadow fire is nearly 100 percent contained now, and trails have reopened, although the fire is reported (as of September 21, 2014) to be still burning east of Little Yosemite Valley in Yosemite National Park.

InciWeb reports that, as of four days ago, the Meadow fire in Yosemite had burned 4,772 acres.

It is only one of the several large fires – and not nearly the largest fire – burning in California, more than 80% of which is under extreme drought conditions at this time. 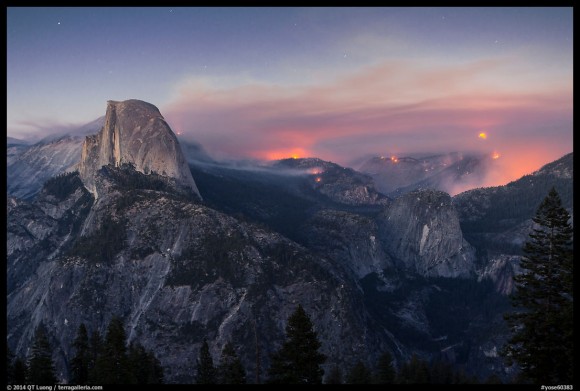 Bottom line: The Meadow fire in Yosemite National Park is still burning, but nearly 100 percent contained now. This video by QT Luong shows the beauty and terror of wildfire.