Scientists studied sharks near Pescador Island in the Philippines. They found the sharks using tail-slaps to stun and capture wild sardines.

Thresher sharks have versatile tails, a new study suggests. Scientists have long suspected that thresher sharks use their elongated tails for more than just getting around. Now, researchers have confirmed that thresher sharks — one of the most distinctive looking shark species — use their long tails to hunt schooling prey. New videos were obtained of thresher sharks near Pescador Island in the Philippines using powerful tail-slaps to stun and capture wild sardines. Because sardines gather into dense schools, large predators typically have hard time trying to catch them. The thresher shark’s tail-slapping behavior appears to be an effective hunting strategy for capturing such prey, scientists say. The research was published on July 11, 2013 in the journal PLoS ONE.

Simon Oliver, lead author of the study, commented on the findings in a press release. He said:

It has long been suspected that thresher sharks use their scythe-like tails to hunt, but the [behavior], which is unique to their taxa in the animal kingdom, has been poorly understood. The evidence is now clear; thresher sharks really do hunt with their tails.

While no one has observed other sharks using their tails to capture prey, this type of hunting strategy is used by dolphins and killer whales. 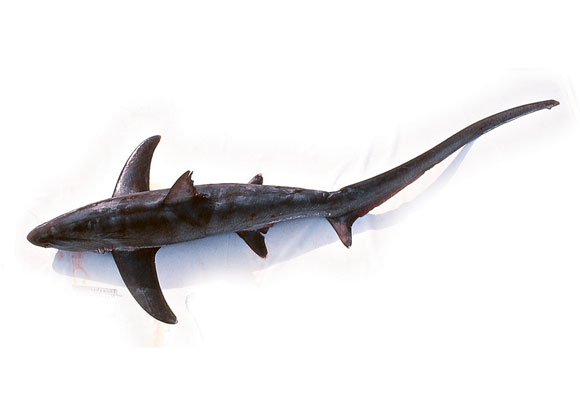 During 2007 to 2009, scientists first filmed thresher sharks (Alopias vulpinus) striking baited lures with their tails off the coast of California. They suspected that the shark’s unique tail design may have evolved for more than just locomotive purposes. Now, scientists have confirmed that thresher sharks do indeed use their tails to hunt prey in the wild.

In 2010, scuba divers filmed 25 incidents of thresher sharks (Alopias pelagicus) using their tails to hunt sardines near Pescador Island in the Philippines. They observed the sharks using both overhead tail-slaps and sideways tail-slaps to stun their prey. A few of the overhead tail-slaps were analyzed in detail and the video showed that the tail-slaps happen fast. On average, the sharks were able to complete a tail-slap in just under two seconds. After executing a tail-slap, the sharks were seen munching down on fish that were left stunned and maimed. A single tail-slap yielded the sharks about two to seven sardines. 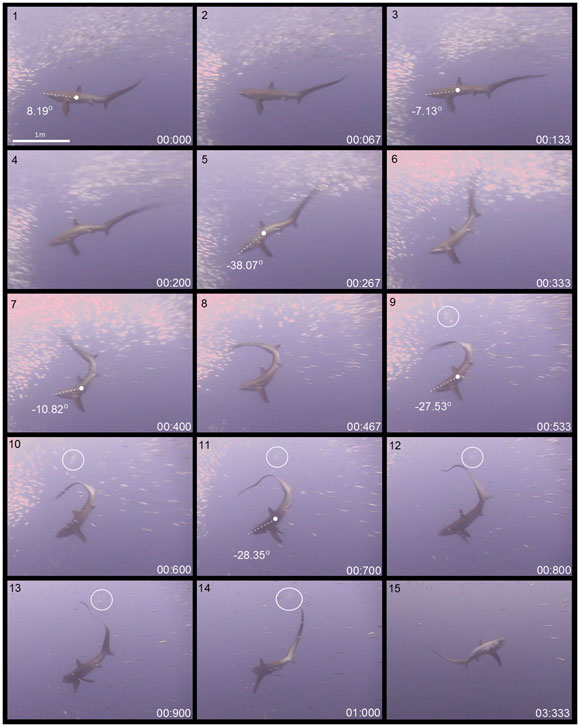 A thresher shark tail-slapping a school of fish. The force of the slap created gas bubbles that are circled in images 9 to 14. Image Credit: Oliver et al. (2013) PLoS ONE.

John Turner, co-author of the study, also commented on the findings. He said:

People are fascinated by the lives of animals that they rarely see and these sharks usually live out in the oceans where they are rarely encountered by people. The large tails of these sharks have been the subject of much speculation, and our observations in the wild show the spectacular [maneuver] in which the tail is used to stun prey.

Other co-authors of the study included Klemens Gann, Medel Silvosa, Tim D’Urban Jackson. All of the scientists were affiliated with either the Thresher Shark Research and Conservation Project or Bangor University at the time this research was conducted.