The tiny blackpoll warbler completes a nonstop flight across the Atlantic in just two to three days. Amazing! 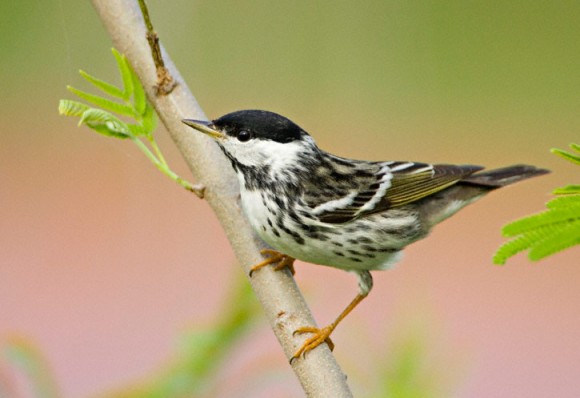 A little songbird known as the blackpoll warbler departs each fall from New England and eastern Canada to migrate nonstop in a direct line over the Atlantic Ocean toward South America. To track the birds’ migration route, scientists used miniaturized light-sensing geolocators attached to the birds like tiny backpacks.

According to the study, which appears in the March issue of Biology Letters, the birds complete a nonstop flight ranging from about 1,410 to 1,721 miles (2,270 to 2,770 km) in just two to three days, making landfall somewhere in Puerto Rico, Cuba and the islands known as the Greater Antilles, from there going on to northern Venezuela and Colombia. 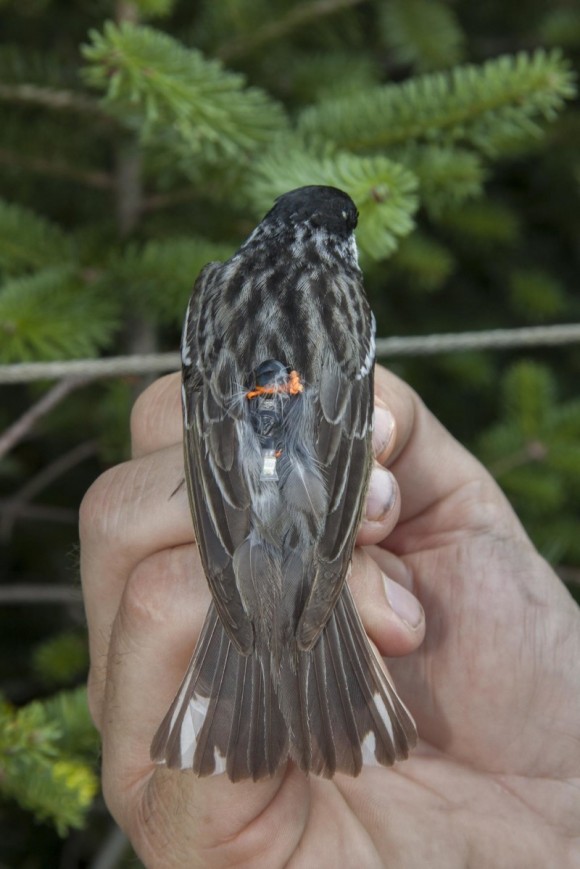 Blackpoll warbler fitted with a miniaturized light-sensing geolocator on its back that enabled researchers to track their exact migration routes from eastern Canada and New England south toward wintering grounds. Photo credit: Vermont Center for Ecostudies

First author Bill DeLuca is an environmental conservation research fellow at the University of Massachusetts Amherst. He said:

We’re really excited to report that this is one of the longest nonstop overwater flights ever recorded for a songbird, and finally confirms what has long been believed to be one of the most extraordinary migratory feats on the planet.

While other birds, such as albatrosses, sandpipers and gulls are known for trans-oceanic flights, most migratory songbirds that winter in South America take a less risky, continental route south through Mexico and Central America, the authors note. A water landing would be fatal to a warbler.

In the recent past, DeLuca explains, geolocators have been too large and heavy for use in studying songbird migration. The tiny blackpoll warbler, at around half an ounce (12 grams), was too small to carry even the smallest of traditional tracking instruments. Scientists had only ground observations and radar as tools.

But with recent advances have made geolocators lighter and smaller. For this work, the researchers harnessed miniaturized geolocators about the size of a dime and weighing only 0.5g to the birds’ lower backs like a tiny backpack. By retrieving these when the warblers returned to Canada and Vermont the following spring, then analyzing the data, DeLuca and colleagues could trace their migration routes.

So-called light-level geolocators use solar geolocation, a method used for centuries by mariners and explorers. It is based on the fact that day length varies with latitude while time of solar noon varies with longitude. So all the instrument needs to do is record the date and length of daylight, from which daily locations can then be inferred once the geolocator is recaptured.

When we accessed the locators, we saw the blackpolls’ journey was indeed directly over the Atlantic. The distances travelled ranged from 2,270 to 2,770 kilometers.

Ryan Norris of the University of Guelph was the Canadian team leader. He said that to prepare for the flight, the birds build up their fat stores.

They eat as much as possible, in some cases doubling their body mass in fat so they can fly without needing food or water. For blackpolls, they don’t have the option of failing or coming up a bit short. It’s a fly-or-die journey that requires so much energy.

These birds come back every spring very close to the same place they used in the previous breeding season, so with any luck you can catch them again. Of course there is high mortality among migrating songbirds on such a long journey, we believe only about half return.

It was pretty thrilling to get the return birds back, because their migratory feat in itself is on the brink of impossibility. We worried that stacking one more tiny card against their success might result in them being unable to complete the migration. Many migratory songbirds, blackpolls included, are experiencing alarming population declines for a variety of reasons, if we can learn more about where these birds spend their time, particularly during the nonbreeding season, we can begin to examine and address what might be causing the declines.

As for why the blackpoll undertakes such a perilous journey while other species follow a longer but safer coastal route, the authors say that because migration is the most perilous part of a songbird’s year, it may make sense to get it over with as quickly as possible. However, this and other questions remain to be studied.

Bottom line: According to a study in the March issue of Biology Letters, the blackpoll warbler completes a nonstop migration over the Atlantic ocean, ranging from about 1,410 to 1,721 miles (2,270 to 2,770 km), in just two to three days.

Read more from the University of Massachusetts Amherst