Jurassic fossil spiders were a rare find, until the 21st century, when farmers in China began turning up Jurassic-period arachnids on a hillside. 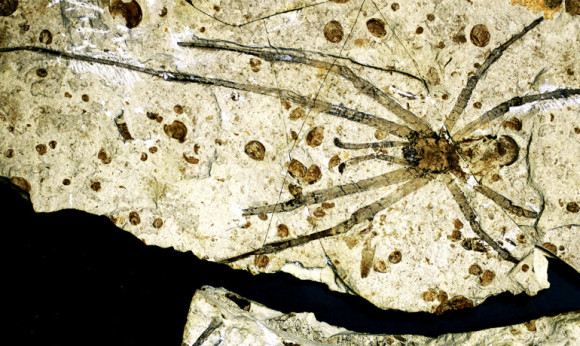 Jurassic spider fossils used to be extremely rare finds. The first was discovered in Russia and described in 1984, and then another was found three years later. But that remained the totality of the fossil record.

Then, in the 21st century, farmers in the area of Daohugou, China—just inside Inner Mongolia—began turning up Jurassic-period arachnids on a hillside. Because of the proliferation of these Chinese discoveries, these days a few hundred specimens are known to science.

“Village farmers dig pits to extract the fossils, which are mainly insects and the occasional spider or other animal, and experts from the university in Beijing travel there, usually during the New Year holiday, and sort through the finds,” says Paul Selden, professor of invertebrate paleontology with the department of geology at the University of Kansas. 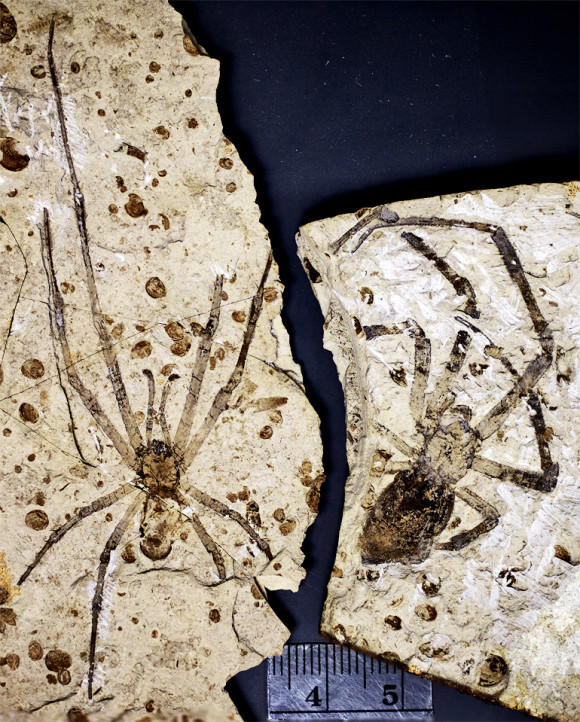 Selden is part of a team that recently described the largest-known fossil spider ever unearthed. They report their findings in the latest issue of Naturwissenschaften.

Part of the family?

“It’s unique because it’s intermediate between the more primitive kinds of the araneomorph, or ‘true’ spiders, and the well-known orbweavers that we see around us commonly today,” Selden says. “While it’s the largest known fossil spider, it’s not the largest spider, which is a Brazilian tarantula.”

The giant fossil spider is considered to be the male version of a female spider found a short time ago in the same locality, called Nephila jurassica. But because some of its physical characteristics are different from the Nephila genus, the latest discovery has spawned an entirely new scientific name.

“Because the male shows features that are not consistent with the placement of the species in Nephila or, indeed, the family Nephilidae, the species was given a new genus name and a new family erected to accommodate the new genus,” says Selden, who also serves as the Paleontological Institute’s director at the university’s Biodiversity Institute.

As with most fossil spiders, the features needed to precisely place the species among spider families were not sufficiently preserved. Scientists must have an exhaustive look at foot claws, hairs, and genital organs. As luck would have it, the volcanic ash beds at Daohugou are exceptional for preserving such fine details.

“Scanning electron microscopy came to the rescue with some of these features, such as the structure of the hairs, and helped to place the species more accurately,” says Selden. “This is the first time this technique has been used on fossil spiders in the rock.”

Selden says that one of the most interesting aspects of this study is how it relates to work being done in molecular systematics on living spiders. “This research relies on fossils to calibrate the data points and give an idea about when the genes for particular traits evolved,” he says.

“When the female was first placed in Nephila, it seemed to throw the existing family tree out of kilter. My colleagues doing the molecular work hypothesized that N. jurassica was actually a primitive orbweaver. Now, the discovery of the male and this detailed research has corroborated their predictions.”

Clues to the climate

He says that the discovery tells scientists that the abundant insect life in this area during the Middle Jurassic was preyed upon, as today, by large, web-dwelling spiders. Importantly, he says the find helps inform humans about its own future on the planet.

“First, it is an amazing spider,” Selden says. “It’s the largest fossil spider—and great to have both male and female. Second, research into the anatomy reveals details of how it lived and interacted with its insect prey.

“These give clues to what the climate was like at the time, and we can then track the fate of these ecosystems as they evolved through time and changing environments. Understanding the processes involved helps us to predict how manmade changes might affect the Earth’s climates and biodiversity.”