This dinosaur species hatched its eggs like brooding birds

The researchers say this research bolsters our understanding of the evolutionary link between birds and dinosaurs.

Researchers at the University of Calgary and Montana State University have shed light on a mystery of paleontology, the science of fossil animals and plants. The question has been: did dinosaurs bury their eggs, as crocodiles do? Or did they lay and incubate eggs in open or non-covered nests, as birds do? The answer for one dinosaur species – a small, bird-like, meat-eating dinosaur called Troodon – appears to be that they hatched their young in a way most similar to birds. The results of this study bolster our understanding of the evolutionary link between birds and dinosaurs, study authors say. Their findings are published in the spring 2013 issue of the journal Paleobiology.

Darla Zelenitsky via the University of Calgary. She and David Varricchio at Montana State University counted and measured the pores in the shells of fossilized eggs of the dinosaur species Troodon.

Researchers Darla Zelenitsky at the University of Calgary and David Varricchio at Montana State University made a careful study of fossilized Troodon egg clutches found in Alberta and Montana. This dinosaur species is known to lay its eggs almost vertically. Zelenitsky and Varricchio’s work suggests that only the bottoms of Troodon eggs would have been buried in mud, while the tops of the eggs remained open to the air. Lead author Varricchio said in a release from the University of Calgary:

Both the eggs and the surrounding sediments indicate only partial burial; thus an adult would have directly contacted the exposed parts of the eggs during incubation.

He said while the nesting style for Troodon is unusual …

… there are similarities with a peculiar nester among birds called the Egyptian Plover that broods its eggs while they’re partially buried in sandy substrate of the nest. 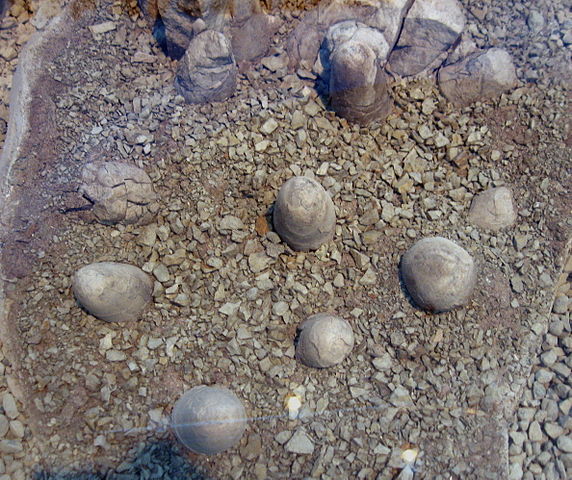 What led these researchers to this conclusion? The eggs of crocodiles, for example, because they’re completely buried, have many pores or holes in the eggshell to allow the tiny croc inside the egg to breathe. The eggs of brooding birds have far fewer pores because they’re exposed to the air more often. Zelenitsky and Varricchio counted and measured the pores in the shells of Troodon eggs to assess how water vapour would have been conducted through the shell compared with eggs from contemporary crocodiles, mound-nesting birds and brooding birds. Zelenitsky said:

For now, this particular study helps substantiate that some bird-like nesting behaviors evolved in meat-eating dinosaurs prior to the origin of birds. It also adds to the growing body of evidence that shows a close evolutionary relationship between birds and dinosaurs.

Bottom line: Darla Zelenitsky at the University of Calgary and David Varricchio at Montana State University analyzed the pores in the skins of fossilized dinosaur eggs to conclude that the species Troodon did not bury its eggs in mud, as crocodiles do. Instead, the eggs of this dinosaurs species must have been at least partially open to the air. The researchers say this research bolsters our understanding of the evolutionary link between birds and dinosaurs.