What happened when scientists realized aerosol sprays were harming Earth’s ozone layer, plus … an update on the Antarctic ozone hole.

January 23, 1978. On this date, Sweden announced it would ban aerosol sprays containing chlorofluorocarbons (CFCs) as the propelling agent. It was the first country in the world to do so. Scientific evidence had mounted that CFCs were damaging to Earth’s ozone layer. Sweden was the first to act on this evidence, which came before before the discovery of the Antarctic ozone hole. Virtually every country on Earth ultimately followed Sweden in banning CFCs, via an international treaty known as the Montreal Protocol. According to a July 2014 ozone update in Physics Today, in the 30 years since the ozone hole was discovered, scientists’ understanding of the polar atmosphere has become much more complete. However:

… The worldwide response to the discovery was fast, but the recovery is slow.

Chlorofluorocarbons banned via Montreal Protocol. In the 1970s, scientists began to understand how chlorofluorocarbon use as refrigerants and aerosol propellants could begin to diminish Earth’s ozone layer. It became widely understood that Earth’s ozone layer protects life on Earth from harmful ultraviolet rays from the sun, and that certain ailments, specifically skin cancers and cataracts, would increase as the ozone diminished. This was prior to the discovery of the Antarctic ozone hole. Some nations of the world, such as Sweden and the United States, began to ban CFCs. The U.S., for example, announced its ban on October 15, 1978.

In the decade that followed, an international treaty called The Montreal Protocol on Substances that Deplete the Ozone Layer – designed to reduce ozone-depleting chemicals and thereby protect Earth’s ozone Layer – was agreed upon by virtually all nations on Earth. The original Montreal Protocol entered into force on January 1, 1989.

The treaty banned the use of CFC-propelled aerosol cans. It regulated other ozone depleting substances, such as bromine-containing halons. As it turned out, the transition to modern aerosol cans was easy. Most consumers didn’t notice any difference among their favorite sprays as aerosol producers began using other propellant gases – propane, n-butane and isobutene – or mechanical pumps.

Has the ban on ozone-depleting chemicals worked to protect Earth’s ozone layer?

It looks as if it has worked, but the actual recovery of the ozone layer has been slow. A well-known marker for progress (or lack of progress) in ozone recovery is the famous ozone hole, which opens up each year over Antarctica. Scientists knew that, in theory, certain chemicals could harm the ozone layer. But they were stunned when, in 1985, a science team reported drops of about 30% in October ozone levels over Antarctica. This finding was entirely unexpected in every sense (“magnitude, year of onset, geographic region, seasonality”). Subsequent satellite observations showed the maximum extent of depleted ozone – which typically comes in September each year – rapidly growing in size and depth. By 1992, the maximum extent was about as large as North America.

The good news is that, since the mid-1990s, the area and depth of the hole at maximum have roughly stabilized.

The bad new is that, according to scientists – although the hole is apparently now stable – it has not yet begun to recover.

However, recovery is expected in the decades ahead, with scientists’ projections suggesting that ozone will return to 1980 levels between the years 2050 and 2070. 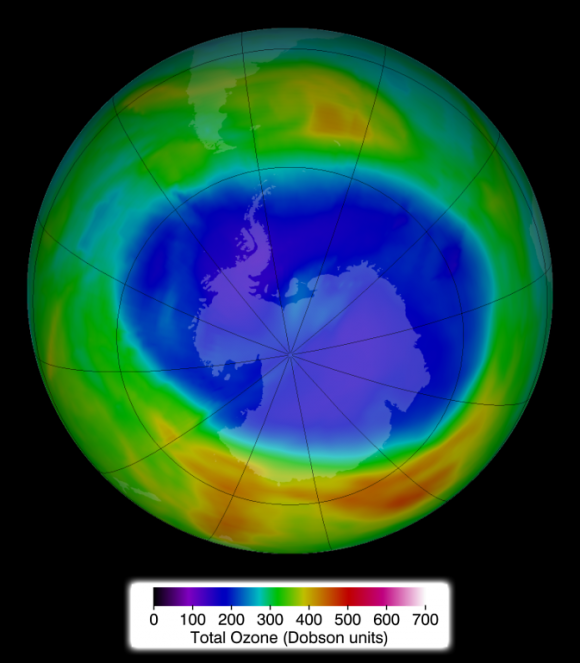 Ozone hole over Antarctica on September 11, 2014. This is the date on which, NASA said, the hole reached its maximum extent for last year. NASA also said the 2014 ozone hole was holding steady in size, in comparison to other ozone holes in recent years. Image via NASA/Ozone Hole Watch.

Last year’s ozone hole. Scientists from NASA and NOAA have been monitoring Earth’s ozone layer and the concentrations of ozone-depleting substances and their breakdown products from the ground and with a variety of instruments on satellites and balloons since the 1970s. They’re mandated under the Clean Air Act to do so. In 2014, the Antarctic ozone hole reached its annual peak size on September 11. The size of the 2014 hole was 24.1 million square kilometers (9.3 million square miles) — an area roughly the size of North America. The 2014 ozone hole reached about the same size at maximum as the 2013 ozone hole.

In 2014, the level of CFCs and bromine-containing halons – both regulated by the Montreal Protocol – over Antarctica had declined about 9 percent below the record maximum in 2000.

Scientists also recorded a minimum thickness of the ozone layer in 2014 at 114 Dobson units on September 30. That’s compared to 250-350 Dobson units during the 1960s. Over the last 50 years satellite and ground-based records over Antarctica show ozone column amounts ranging from 100 to 400 Dobson units.

Many scientists are now wondering what role warming global temperatures are playing in ozone depletion and recovery. Paul A. Newman, chief scientist for atmospheres at NASA’s Goddard Space Flight Center in Greenbelt, Maryland, said on October 30, 2014:

Year-to-year weather variability significantly impacts Antarctica ozone because warmer stratospheric temperatures can reduce ozone depletion. The ozone hole area [in 2014] is smaller than what we saw in the late-1990s and early 2000s, and we know that chlorine levels are decreasing. However, we are still uncertain about whether a long-term Antarctic stratospheric temperature warming might be reducing this ozone depletion.

Before leaving the story of ozone behind, you might want to take a look at an excellent and informative article in Physics Today, from July, 2014. It tells a detailed story of Earth’s ozone depletion, explaining how human causes and natural causes combined to create the problem, and how a united effort by Earth’s nations ultimately will solve the problem (albeit slowly).

In the conclusion to the Physics Today article, the three scientist-authors – Anne R. Douglass, Paul A. Newman and Susan Solomon – wrote:

The future of Antarctic ozone is promising. Ground and satellite observations show that chlorine levels in the troposphere and stratosphere are decreasing. Model projections suggest that ozone will return to 1980 levels between 2050 and 2070. The ozone hole has been an iconic feature, a testament to the possibility of unexpected and large impacts of anthropogenic actions on the environment. Its disappearance will symbolize the possibility of protecting Earth through cooperative actions.

Bottom line: On January 23, 1978, Sweden became the first country to announce it would ban aerosol sprays containing chlorofluorocarbons (CFCs) as the propelling agent. This post briefly outlines the history of our knowledge of ozone depletion and the adoption of the Montreal Protocol, and it gives an update on the 2014 Antarctic ozone hole.