The undark nights of summer 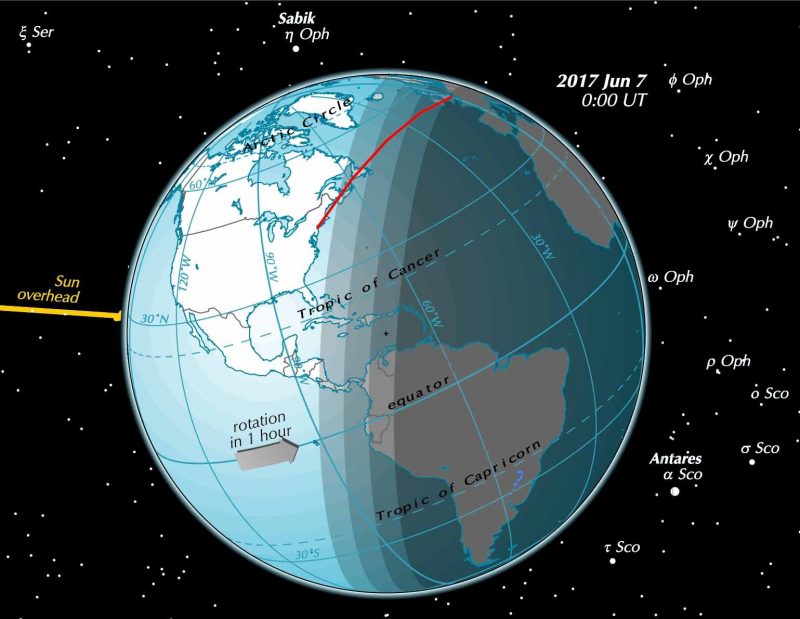 View larger. | This illustration is set for June 7. It’s via astronomer Guy Ottewell and is explained in the text below.

For most of June, and into July, the sun is so far north in the sky that it doesn’t get much below our horizon.

“Our” is used in our usual north-hemisphere-centric way, annoying to southerners such as my cousins in New Zealand. I should say that in June the sun doesn’t get much below the horizon for those of us who live in northern latitudes – especially far-northern latitudes.

Our picture at top is of a stage in the approach to the summer solstice. The Earth is traveling away from the viewpoint, and on June 21 will reach the position where its north pole is tipped most steeply sunward.

As you can see, the north pole and a ring around it already have 24-hour daylight.

For a zone of Arctic regions starting about 15 degrees down from the pole, the sun does set, but gets no deeper than 6 degrees below the horizon; so this zone gets only what is called civil twilight. For the next zone of Canada and northern Europe and Siberia, the sun in the middle of the night fails to get to 12 degrees below the horizon, and this is what is called nautical twilight. And the next zone southward gets no deeper darkness than astronomical twilight, with the sun never as much as 18 degrees down. Only southward of that is there at least some nighttime that is dark enough to be defined as astronomical night.

So only south of this are there are no nights without at least some minutes of true astronomical darkness.

The British Isles, lying between about 50 degrees and 59 degrees of latitude, and most of Canada, being north of the long “49th parallel,” are within that outer circle. They have a patch of nights – as long as from mid-June to mid-July – in which there is no really deep darkness. The Earth is bowing too adoringly toward the sun.

As a bonus: the red line is the great-circle airline route from New York to London, showing that you should choose a window on the left if you want to watch the sun as it sets, and then to see it come up over Europe at the end of the shortened night.

And the background stars are those you would see, if viewing the Earth from the direction and distance (nine Earth-radii) as in the picture. This is a feature I started adding for the large pictures in the new Under-Standing of Eclipses.

Finally, here’s the full version of the image at top; the yellow line points toward the sun: 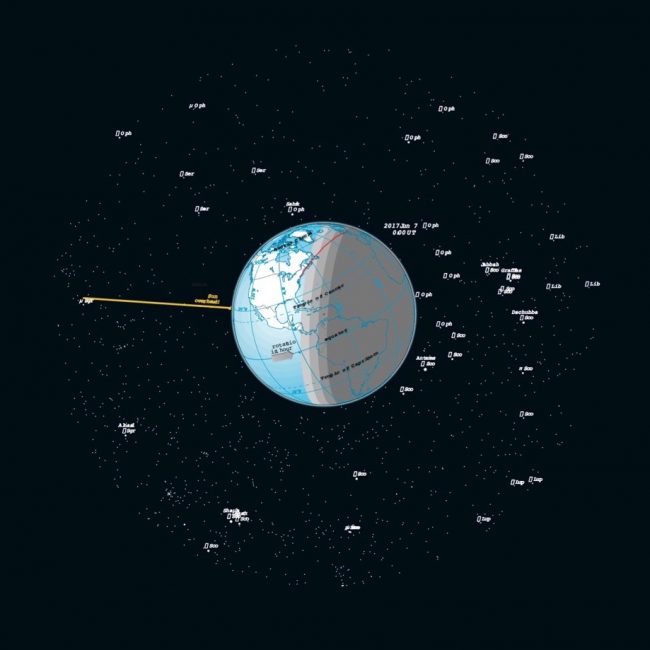