Acoustic and camera tags attached to the whales revealed a repertoire of feeding acrobatics. The video in this post gives you a whale’s-eye view of what happens.

When humpback whales feed on tiny fish called sand lances at the ocean floor, the whales display feeding actions that scientists describe as side-rolls, side-roll inversions, and repetitive scooping. Acoustic and video tags attached to humpback whales revealed these newly-discovered behaviors. The data were collected at the Stellwagen Bank National Marine Sanctuary and the Great South Channel, in waters off Nantucket, Massachusetts. But there is a dark side to the foraging acrobatics of humpback whales at the seafloor. Such behaviors also make the whales vulnerable to entanglement in fishing equipment set at the bottom of the ocean. Scientists at the National Oceanic and Atmospheric Agency published these results about newly-found feeding techniques of the whales in July 2013 in the journal Marine Mammal Science.

Crittercam™ is National Geographic’s underwater sound and video recorder; it was attached to some of the humpback whales in the study. The video segment below – from National Geographic – shows humpback whales being tagged with Crittercam™ and includes underwater footage of whales feeding on sand lance at the seafloor. Toward the end it shows a whale breaching, or leaping above the ocean surface, from the whale’s perspective.

Tagging technology is allowing us to observe whales underwater, much as land-based biologists study animal subjects in their specific environments. The data have allowed us to detect new feeding techniques as well as nuances in those behaviors. We have determined that bottom feeding is a much more commonly used technique than the more well known bubble net behaviors.

Scientists used DTAGs, also called synchronous motion and acoustic recording tags, and National Geographic’s Crittercam™ to collect data about the humpback whales’ feeding techniques at the seafloor. A DTAG is attached to a whale with powerful suction cups while the animal is at the surface. Sensors in the DTAGs track the whale as it dives, recording its movements in three dimensions. After a few hours, the tag disengages from the whale and rises to the ocean surface. A beacon in the tag guides scientists to recover it and data about the whale’s travels are downloaded to a computer for analysis.

A whale’s travels, as recorded by a DTAG, can be visually displayed using a software tool that maps the whale’s movements as three-dimensional ribbon-like paths called a trackplot. Colin Ware, at the University of New Hampshire’s Center for Coastal and Ocean Mapping, who is the paper’s lead author, said in the same press release:

By visualizing the data with TrackPlot [software], we can actually see how the whale moves underwater and this enables us to discover different kinds of foraging behaviors. With these 3-D visualizations, we can follow the path of the whale from surface to seafloor along with all of the pitch, roll and heading changes while underway. By adding Crittercam™ video, we now get a more complete understanding of these various bottom feeding techniques. 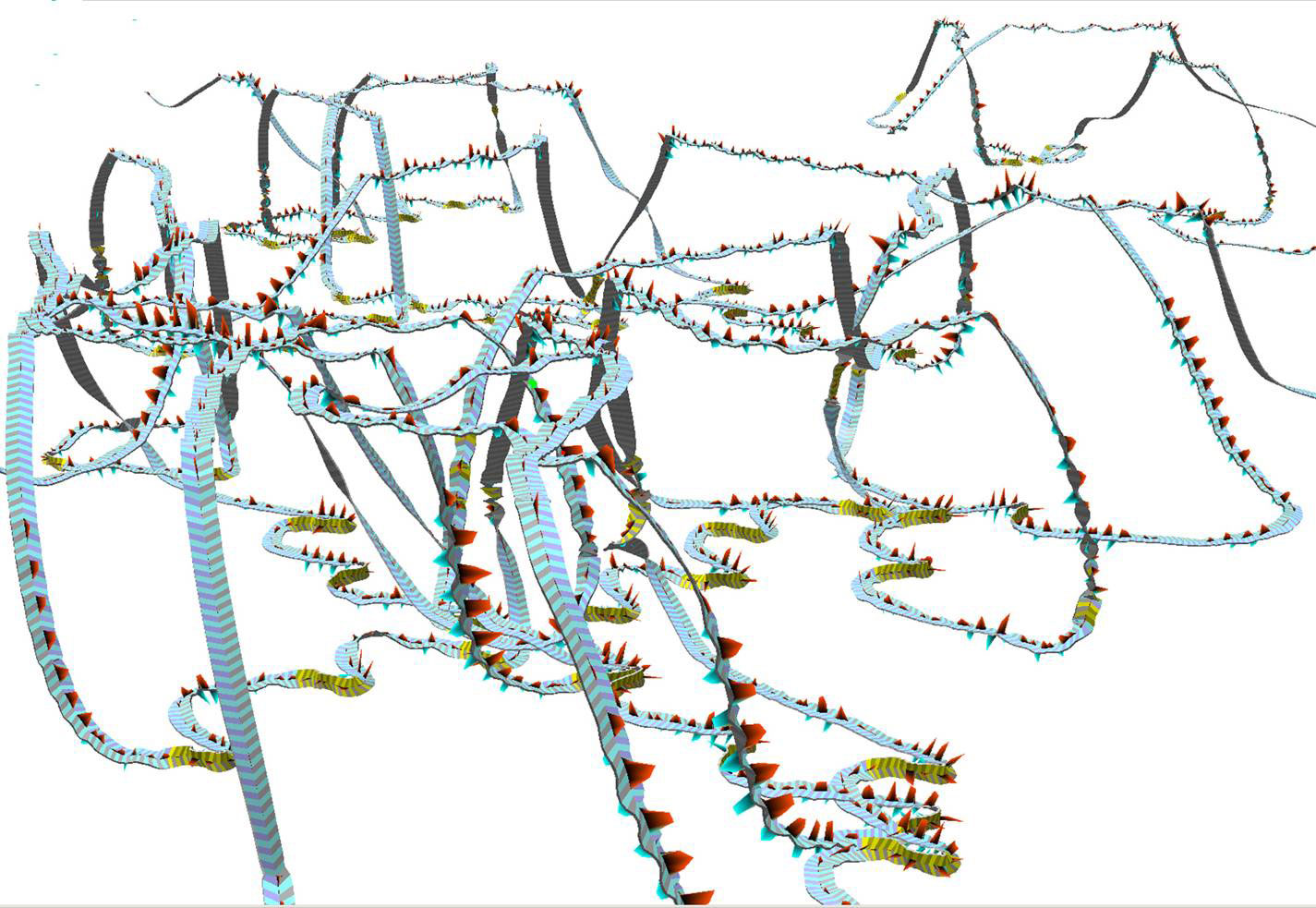 A 3-dimensional visualization of data from a DTAG showing a humpback whale’s movement over nearly two hours. The whale, tagged at Stellwagen Bank National Marine Sanctuary, traveled at depths ranging from 30 to 150 feet (9 to 45 meters) deep. Red and blue triangles along the ribbon path show the whale’s tail fin strokes as it moves through the water. Yellow sections show bottom side-roll feeding. Image via Colin Ware, University of New Hampshire Center for Coastal and Ocean Mapping.

Crittercam™ revealed never-before-seen behaviors at the ocean floor as the whales fed on sand lance, including new evidence that the humpback whales were coordinating their movements as they fed, perhaps coralling the fish in clusters and preventing them from escaping. Crittercam™ also caught never-before-seen video of dense schools of sand lance forming mats along the seafloor during the day. 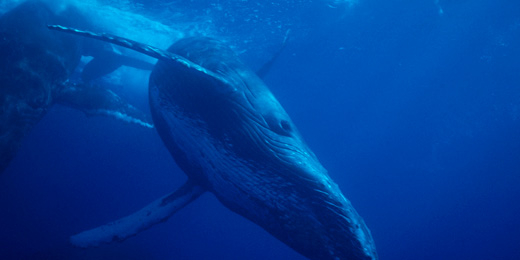 Sand lance serve as a major food item for cod, salmon and whales. The humpback whale acrobatics was observed in whales feeding on these little fish. Image via CaRMS Photogallery/Claude Nozères. 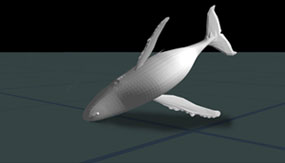 A computer-generated image of a humpback whale in its side-roll feeding position. Image via Colin Ware, University of New Hampshire Center for Coastal and Ocean Mapping.

Humpback whales feed by gulping in schools of small fish or krill. As large volumes of water and prey are swallowed, folds called ventral pleats in a humpback whale’s throat open out to expand its throat. Then, as its tongue moves forward to force water out the sides of its mouth, bristle-like structures that hang from its upper jaw, called baleen, filter out small prey in the water that is subsequently swallowed.

At the Stellwagen Bank National Marine Sanctuary and the Great South Channel, humpback whales feed on North Atlantic sand lance (Ammodytes dubius), also known as sand eels (even though they are not related to true eels). These small long-bodied fish with a pointed snout are bottom-dwellers that like to burrow in the sand.

Scars on the jaws of humpback whales, and previous tagging studies, had led scientists to suspect that the whales fed at the seafloor using a bottom side-rolling maneuver. This motion can be described as the whale rolling sideways, between 45 to 135 degrees from its normal orientation along the seafloor. 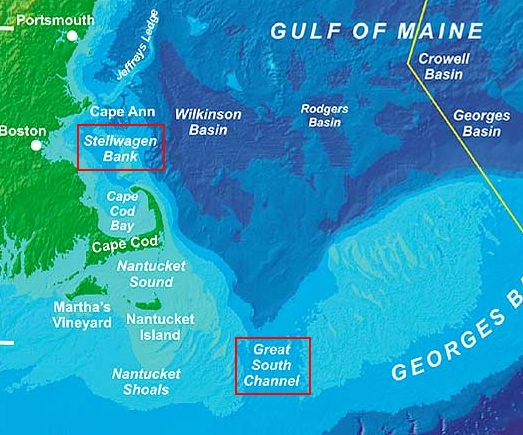 For this study, scientists at the National Oceanic and Atmospheric Administration studied whales at the Stellwagen Bank National Marine Sanctuary and the Great South Channel, in the North Atlantic. Image via Northeast Fisheries Science Center/NOAA.

The most commonly-observed roll configuration was a 90 degree side-roll, with the whale pointed head-down by about 30 degrees. Another less common feeding maneuver was the side-roll inversion, when the whale moved sideways by more than 135 degrees, with its belly almost facing upwards.

One particularly acrobatic humpback whale was observed performing a sequence of nimble moves every 20 feet (6 meters), rolling sideways from 90 degrees to an inverted position, taking in 10 to 17 scoops of lance eel during each dive.

The new tagging data not only confirmed scientists’ suspicions about humpback whales engaging in seafloor side-roll feeding, but also shows that this type of feeding can occur over a long period of time where sand lance are found in large numbers. As the whales fed at the seafloor, they were observed expanding their throat space by opening folds in the bottom of their throats called ventral pleats, to accommodate large volumes of water and prey in a single gulp.

Bottom line: Humpback whales display feeding maneuvers described as side-rolls, side-roll inversions, and repetitive scooping as they forage for small fish called sand lance at the seafloor. These behaviors were discovered in data from by acoustic and video tags attached to humpback whales at the Stellwagen Bank National Marine Sanctuary and the Great South Channel, in waters off Nantucket, Massachusetts.