The loss of trees in Texas will affect the state in many ways, experts say. For example, there is increased fire danger because all the dead trees are now fuel for future wildfires.

In Texas in recent years, the summers have been blazing hot and very dry. We haven’t gotten the usual spring and fall rains. 2011, in particular, was an unprecedented year of drought and wildfires. The Texas Forest Service said earlier this week the recent drought might have killed some 10% of the state’s trees – or up to half a billion trees – according to preliminary numbers from a statewide survey.

In 2011, Texas experienced an exceptional drought, prolonged high winds, and record-setting temperatures. Together, those conditions took a severe toll on trees across the state.

Drought in Texas in 2011 has killed as many as 10% of the state’s trees. You often see the dead trees in swaths, like this one, among trees apparently still alive. Photo by Jay Janner via Austin American Statesman

This news is no surprise to those of us who live in Texas, who experienced last summer’s heat and dryness blast. The effect of the drought on trees is obvious to those who live here, although not as obvious in cities – where people still water their yards, albeit with water restrictions – as in rural areas. In some places outside the city, the landscape looks devastated. We hear stories of wildlife (including rattlesnakes) coming into the suburbs, looking for food. If you even just drove through Texas, you’d notice the dead trees, because the highways are lined with them.

Tom Boggus, director of the Texas Forest Service, told the Austin American-Statesman yesterday that the change in the Texas landscape is:

… very shocking. It’s a significant change in the landscape.

The Texas Forest Service’s estimated number of dead trees varies — from a low of 100 million to a high of 500 million — from a survey of tree mortality across 63 million acres of forest land in Texas this year. The numbers don’t include trees that died in the many Texas wildfires this year, including the massive wildfire in Bastrop, east of Austin in September 2011 that destroyed 1,600 homes and an estimated 1.5 million trees. 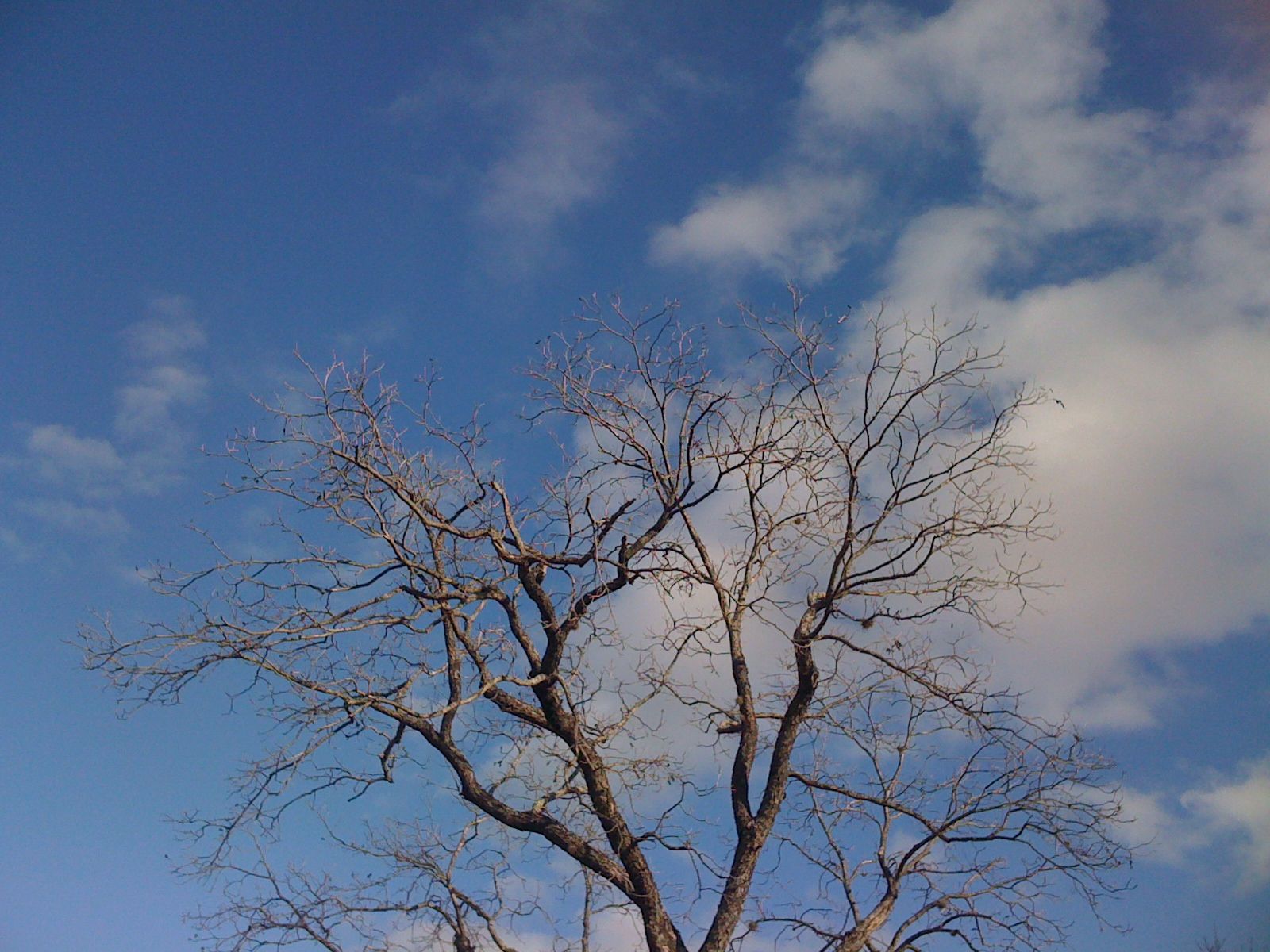 In Texas in the winter of 2011-2012, it’s hard to know which trees are dead, which are dormant from last summer’s brutal heat and which are bare due to the normal cycle of winter cold. We won’t know until spring comes. Image Credit: Deborah Byrd

It has been raining in Texas this week. Last night, we got a good solid rain that fell for many hours. The U.S. Drought Monitor says that improvements to drought conditions were made across northern and central Texas this week as rain and snow (0.5 – 2.4 inches, liquid equivalent of snow included, as of 12 UTC on December 20, 2011) fell there as a result of the storm earlier in the week. Still, experts say the extreme drought remains despite recent rains. They say the drought will continue for at least another 6 months, maybe longer.

Barry Ward, executive director of the nonprofit Trees for Houston, which supports forestry efforts, told Reuters on Tuesday that the current loss of trees – 10% of Texas trees – will affect the state in many ways. For example, he said, all the dead trees in Texas will provide fuel for future wildfires. That fact, again, is no surprise to those of us who live here, who watched last summer as the whole state seemed to turn into one big tinderbox.

Plus the record-setting heat and drought in Texas in 2011 – coupled with high winds – will continue to take its toll on living trees, whether or not the drought continues, because they have been too weakened to survive. I’ve watched that happen on my own city street and local park. The weak trees, many of them old large trees, are going first. 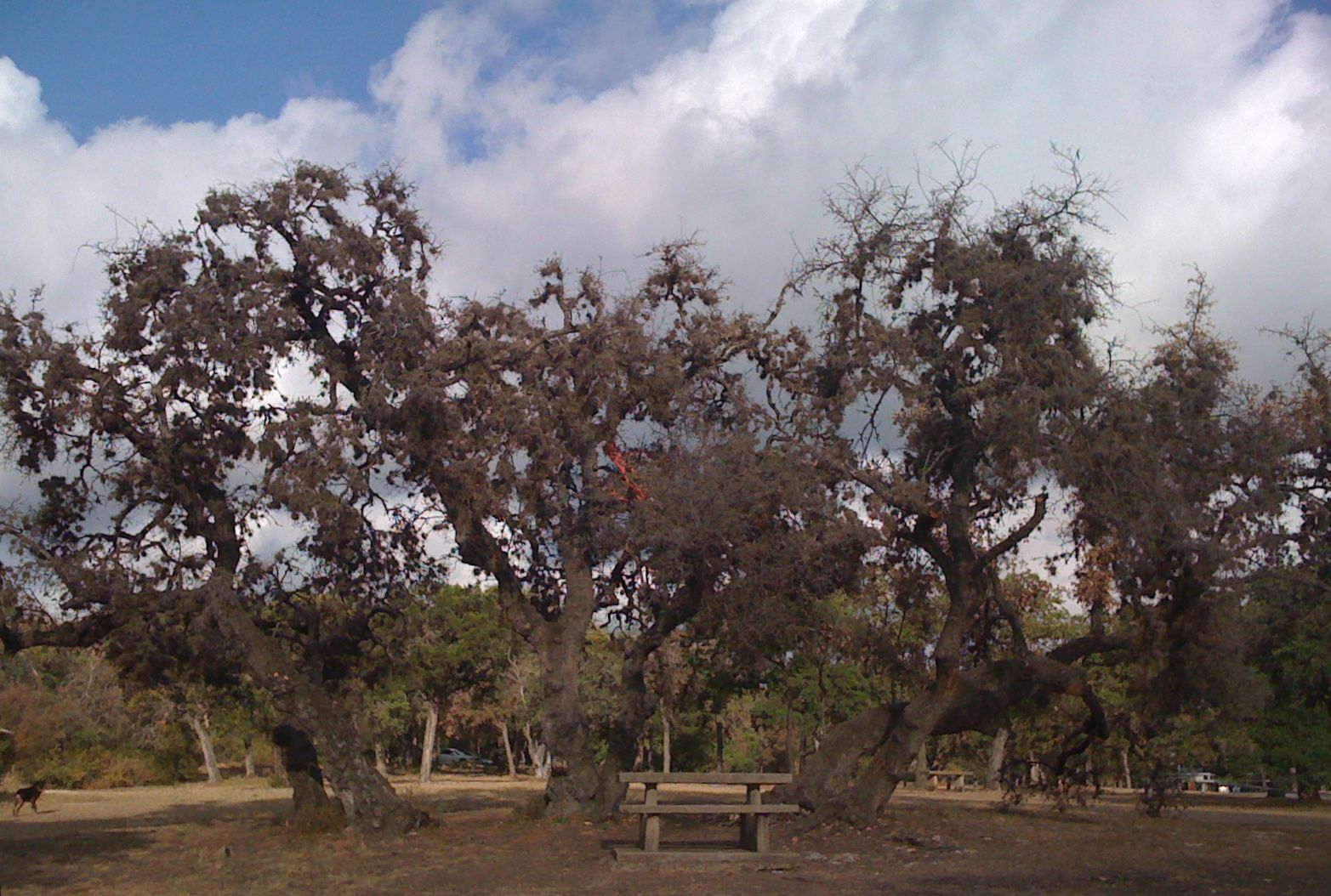 Dead trees in a major city park, Zilker Park, in Austin. These old large trees, which once shaded picnic lunches, have already been cut down. Image Credit: Deborah Byrd

The Texas Forest Service says it will use satellite imagery to firm up its ballpark estimate of tree loss in the spring 2012, when budding leaves will point to which trees survived, and which trees succumbed, to the Texas drought of 2011.

Texas wildfires still burning as winds die down, from September 2011

Gettin’ biblical down in Texas

Reuters: Texas drought kills up to half a billion trees

Austin American-Statesman: Texas may have lost 10% of its trees