Test your holiday nut-cracking skills against those of wild monkeys

Humans aren’t alone in the animal kingdom when it comes to using tools to crack nuts. Wild bearded capuchin monkeys are good at it too.

We often think nothing of cracking open a nut during the holidays, but nut-cracking is actually a highly skilled behavior involving tool use and our intelligent big brains. Humans, however, aren’t alone in the animal kingdom when it comes to using tools to crack nuts. Several primates are good at it too. In a study published on February 27, 2013 in the journal PLOS ONE, researchers found that wild bearded capuchin monkeys were quite skilled at placing piassava nuts in a stable position on a surface where they could then use stones to crack them open. 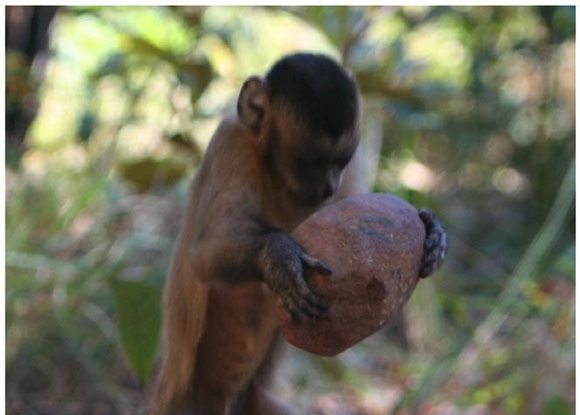 Wild monkey getting ready to crack open a nut. Image via Dorothy Fragaszy via PLOS ONE.

Scientists filmed wild bearded capuchin monkeys in Brazil cracking open piassava nuts over the course of three days. Piassava nuts from palm trees are irregularly shaped and they have a tendency to roll around a bit if placed on a relatively flat surface. The monkeys were observed knocking the nuts several times against a hard surface before placing the nuts into shallow pits in a log. The placements were such that the nuts rarely wobbled or rolled away after placement. Once the nut was in place, the monkeys would then use stone hammers to crack open the nut.

The data showed that the monkeys placed the nuts into a stable position more often than would be expected by chance. The scientists think that the knocking behavior helps the monkeys to use either touch or sound cues to efficiently place the nut in a stable position. The monkeys did not appear to rely on visual cues during nut placement. Instead, they frequently looked around when placing the nuts on the log, possibly on the lookout for potential threats.

Next, the scientists recruited some human volunteers to perform a similar task. The people were blindfolded then given 20 nuts to place into a stable position on a similar nut-cracking surface. Humans performed just as well as the monkeys (i.e., 71% of the nut placements were in a stable position), but they didn’t use any sort of knocking behavior to accomplish this feat. In contrast to the monkeys, humans were frequently observed rotating the nuts in their hands before placement.

Dorothy Fragaszy, lead author of the paper published in PLOS ONE, is a primate researcher at the University of Georgia. Other co-authors of the paper included Qing Liu, Barth Wright, Angellica Allen, Callie Welch Brown and Elisabetta Visalberghi.

There are bound to be some nuts with shells lying around your holiday party. So close your eyes and give it a try — the rolling part that is, not the smashing part. That probably wouldn’t go over so well.

Of course, humans no longer need to use logs and stones to crack nuts. We now have specialized tools that allow us to crack nuts open with ease. 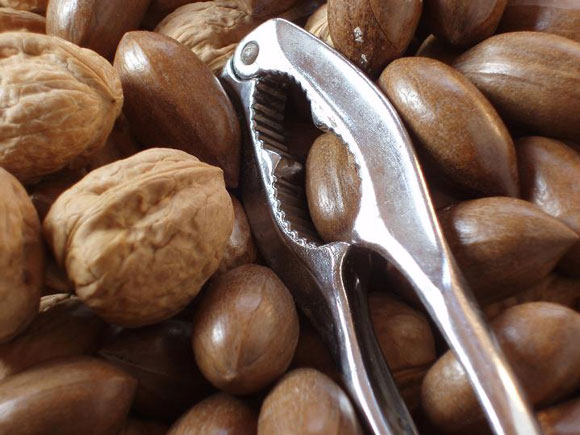 Bowl of nuts with a nutcracker. Image via christmasstockimages.com

One of the earliest written references to nut-cracking tools was made during the 14th century. Even Leonardo DaVinci is known to have devoted some of his time to perfecting nut-cracking tools. In the mid-20th century, nutcracker dolls designed in Germany became a popular holiday gift. In German folklore, nutcrackers are thought to symbolize good luck or the belief that life can be hard, but rewarding.

Nutcracker dolls are now a common decoration in many homes over the Christmas holiday.

Bottom line: In a study published on February 27, 2013 in the journal PLOS ONE, researchers found that wild bearded capuchin monkeys were quite skilled at cracking open piassava nuts with the use of tools such as stone hammers and logs.

Origins of teamwork found in chimpanzees