Italy’s Phlegraean Fields – one of Earth’s most active and volatile volcanic regions – is readying for a catastrophic eruption, says new research. But not for thousands of years. 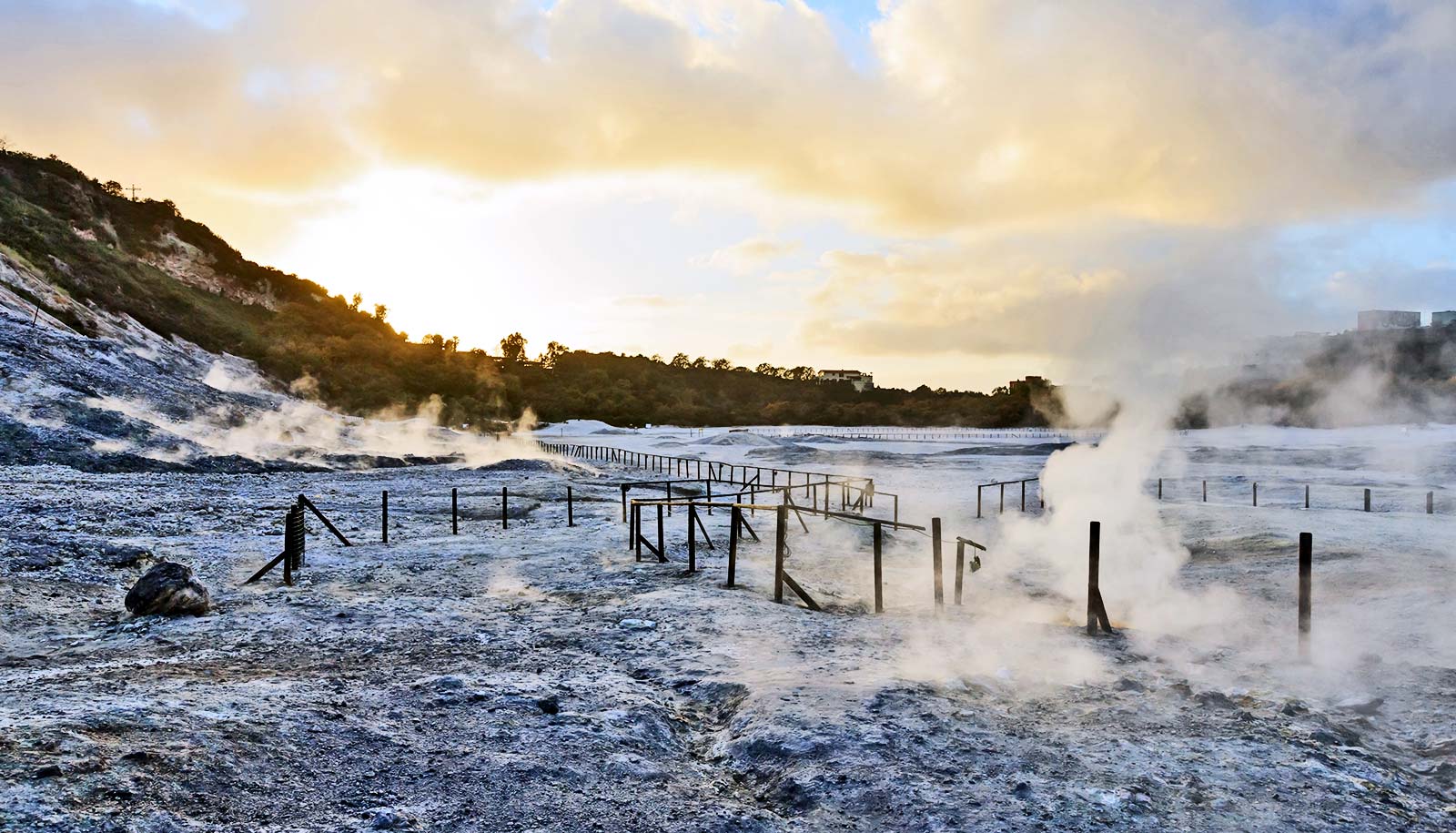 The Solfatara volcanic crater is part of the Phlegraean Fields near Naples. Image via Futurity/Getty Images.

A new study suggests that the Phlegraean Fields — one of the most active and volatile volcanic regions in the world — is at the early stage of a new cycle that could culminate in another gigantic eruption. But it won’t happen for several thousand years, according to new research, published November 14, 2018, in the journal Science Advances.

The Phlegraean Fields, near the bustling metropolis of Naples, Italy, is one of the world’s most active and volatile volcanic regions. Its calderas were formed by enormous eruptions that took place 39,000 and 15,000 years ago, in addition to countless minor eruptions. Smaller volcanoes also erupted repeatedly during the period in between. The Phlegraean Fields have become more active again in recent years. 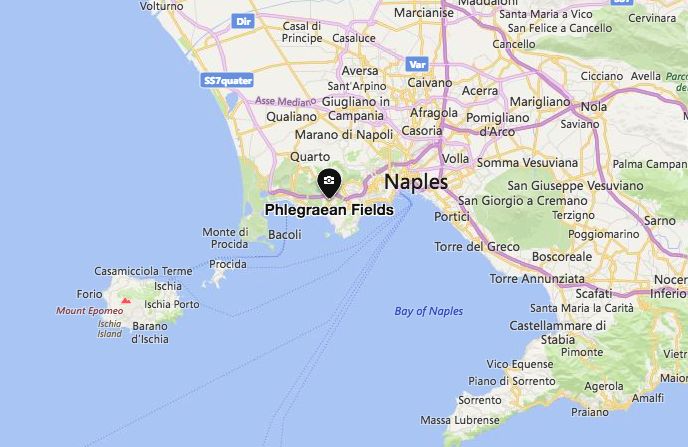 The Phlegraean Fields, to the west of Naples, Italy. The area of the caldera consists of 24 craters and volcanic edifices, most of which are under water.

The researchers explained that volcanoes go though cycles. The cycle begins with the accumulation of magma – molten rock – in a large reservoir in the Earth’s crust, a process that takes millennia. Long periods of dormancy and small eruptions characterize this stage. A further injection of magma into the magma chamber triggers an enormous eruption. The reservoir empties abruptly, the roof collapses, a new caldera forms, and the cycle begins anew.

In the Phlegraean Fields study, rock samples from 23 earlier eruptions provided the researchers with evidence of the start of a new cycle. In particular, rock material from Monte Nuovo, which last erupted in 1538, resembles rock ejected just before the last two major eruptions.

Despite their new findings, the researchers can’t predict exactly when the next major eruption at the Phlegraean Fields may occur. Francesca Forni of ETH Zurich is the study lead author. She said in a statement:

But we do not have to worry about a catastrophic eruption in the next 20,000 years. The magma reservoir underneath the Phlegraean Fields fills up only very slowly. We, the next generations, and perhaps the entire human race will not be here to witness a massive eruption. 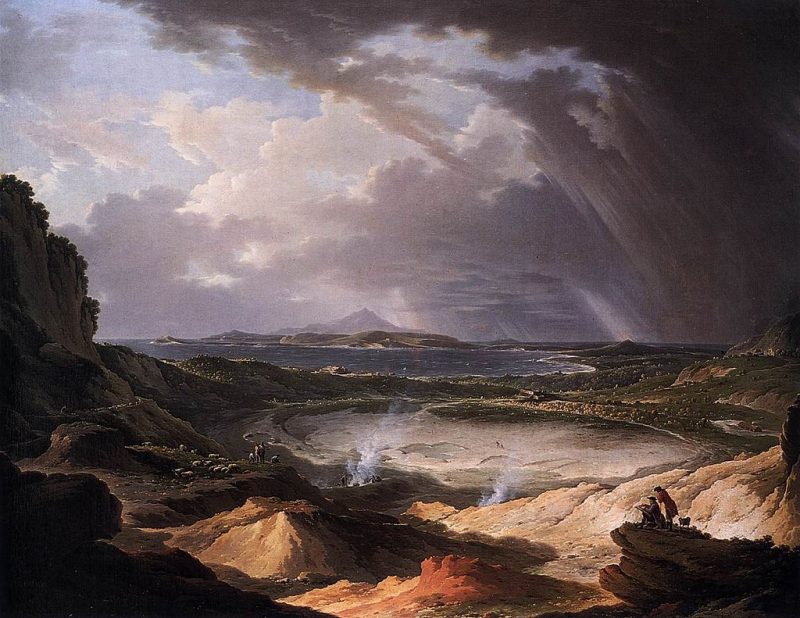 A fumarole at the Phlegraean Fields; painting by Michael Wutky (1780s). Image via Wikipedia.

For the research, the volcanologists took advantage of the fact that the chemical composition of minerals from magmatic rock stores information on the conditions under which it originates. By comparing the chemical signatures of rock from different eras, scientists can reconstruct the conditions in the crust at the time of its formation. This allows them to determine the current stage of the magma system. The volcanologists also created a model of the cycle. Olivier Bachmann, a professor at ETH Zurich, is a study co-author. He said:

We can reconstruct from past eruptions the rhythm that supervolcanoes have, and hopefully predict where they stand in their cycle. 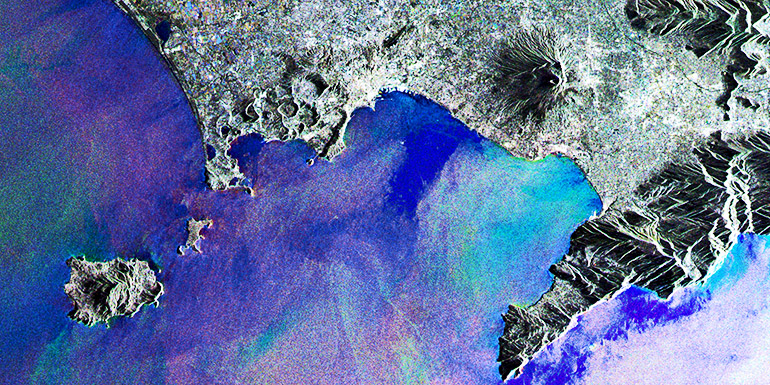 The Bay of Naples with the island of Ischia (left) and the scarred Phlegraean Fields. Naples lies at the foot of Mount Vesuvius (center). Image via Futurity/ESA.

Although a major eruption is thousands of years away, it’s important to continue to monitor the evolution of the Phlegraean Fields on a sustained basis, said Forni. She warns that even a small eruption, which can occur during the early stages of a cycle, would wreak havoc on the region.

Some of the early warning signs of an impending eruption of a magma chamber are land elevation and changes in the composition of the gases the Phlegraean Fields emits.

A massive volcanic eruption would be devastating not only for the Naples region but the entire world. Supervolcanoes have caused short-term climate catastrophes, crop failure, and famines in the past. The eruption of the Indonesian supervolcano Tambora in 1815 is a well-documented example: the following summer was dubbed the “year without a summer,” and even places as far away as Switzerland suffered crop failure.

Bottom line: A new study suggests that Italy’s Phlegraean Fields is readying for a catastrophic eruption, but not for thousands of years.