Heavy rain, flash flooding, storm surge and damaging winds in the Philippines as the storm bears down on the northern island of Luzon. 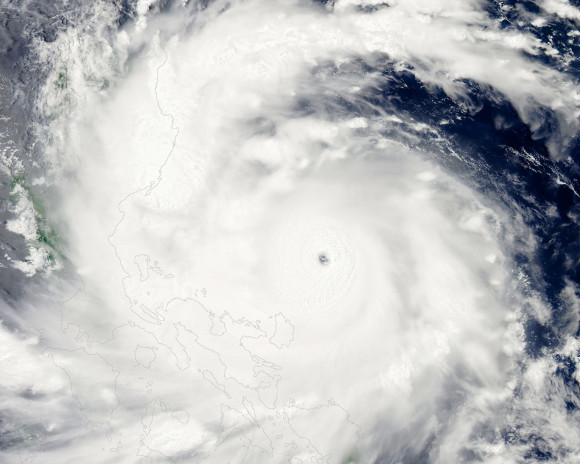 Last night (August 10, 2013), Typhoon Utor intensified into a Super Typhoon with winds estimated around 130 knots, or roughly 150 miles per hour. It is pushing to the northwest into the Philippines today, and made landfall around 3 a.m. according to local clocks there on Monday, August 12, 2013. Heavy rain, flash flooding, storm surge over 20 to 30 feet, and damaging winds are likely for the Philippines as the storm bears down on the northern island of Luzon.

Super Typhoon Utor, also known as Typhoon Labuyo in the Philippines, has been going through an eye wall replacement cycle. These cycles typically occur when storms become intense. The eye wall is where the strongest winds are located in the system, and when it becomes so strong, the eye wall typically collapses and reorganizes into another eye wall. During this transition phase, the cyclone becomes slightly weaker. The latest imagery from the storm does not indicate a visible eye, which could be good news for the the island of Luzon. However, the impacts are still expected to cause major problems.

Once Super Typhoon Utor pushes through the Philippines, it is expected to weaken into Category 1 or 2 storm. It will continue to push to the northwest and later impact parts of southeast China, and possibly skirting just to the south and west of Hong Kong. Forecasting the intensity of a tropical cyclone can be difficult, meaning everyone across the region should pay close attention to this typhoon over the next several days. However, it looks like there is potential for the storm to intensify after it pushes over the Philippines and emerges back over warm waters.

Bottom line: Super Typhoon Utor is currently impacting the northern Philippine island of Luzon. It is bringing with it heavy rains, flash flooding, damaging winds, and significant storm surge. The storm is expected to push to the northwest and eventually impact parts of China later this week.