The thing that got us off the hook? A big hot interception 200 million years ago. 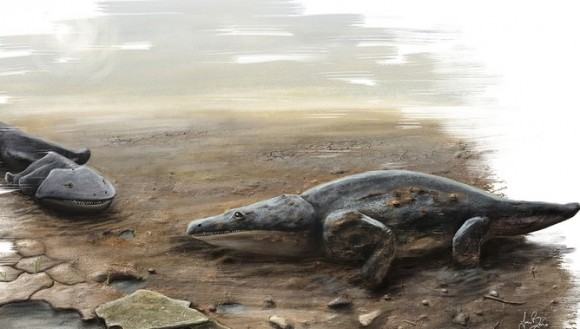 Toilet jaws: the scourge of people and dinosaurs 200m years ago. Image credit: University of Edinburgh

By Stephen Brusatte, University of Edinburgh

Say hello to one of the strangest creatures to ever call our planet home: a giant salamander-like amphibian that lurked in the waters of Europe more than 200m years ago.

My colleagues and I recently discovered this new beast, whose fossils we found in Portugal. Its scientific name is Metoposaurus algarvensis, a nod to the sunny holiday region in southern Portugal where its bones can be found eroding from an ancient cliff. But as we so often do, we gave it a cheeky nickname that is a little more fun, and certainly easier to pronounce. We call it the “super salamander”.

That name pretty much sums it up. It was more than two metres long and probably weighed roughly as much as a human. Its head was the size of a coffee table, studded with hundreds of piercing teeth. Its big, broad, almost flat upper and lower jaws were hinged together at the back and could snap shut like a toilet seat to gobble up fish, other amphibians, and maybe even small dinosaurs and mammals.

Metoposaurus was an ancient relative of today’s amphibians, which include salamanders, newts, frogs, and toads. It was part of a major group of mostly large amphibians called temnospondyls, which lived all over the world for over 100m years and probably included the ancestors of the modern species.

Some of these temnospondyls were even larger: the terrifying Prionosuchus was around eight to ten metres long and could have eaten Metoposaurus for a snack. Yet our super salamander warrants interest, if only because it’s a weird animal. It may as well be an alien from another planet.

Prionosuchus: even bigger and badder than super salamander. Image credit:Wikimedia

And this is the case with so many fossils that get their 15 minutes of fame in the press. Several weeks ago, a 480m-year-old “human-sized lobster ancestor” went viral online. And just a few days ago, another wacky creature living alongside the earliest dinosaurs got the celebrity treatment: a car-sized “butcher croc” called Carnufex.

Sometimes the way fossils are treated in the press makes it seem like they are nothing more than oddities, curiosities, or in the modern digital world, clickbait. You could almost imagine Metoposaurus or Carnufex in a prehistoric circus: come and see the fossil freaks!

But the reason most of us study fossils is not just because they are a talking point, but because they are our only record of how life has changed over time. They give us clues to how real animals and ecosystems have evolved and have responded to dramatic climate changes and environmental shifts.

Metoposaurus is a good example. It tells an interesting story about how our modern world came to be, how dinosaurs rose to power, and how sudden mass extinction events have ravaged the planet.

Metoposaurus lived during a remarkable time in Earth history about 220-230m years ago, when all of the world’s continents were joined together into a single landmass called Pangaea. This was a desert world, much hotter and drier than today. Big amphibians were one of the dominant groups, prowling rivers and lakes over much of the globe. 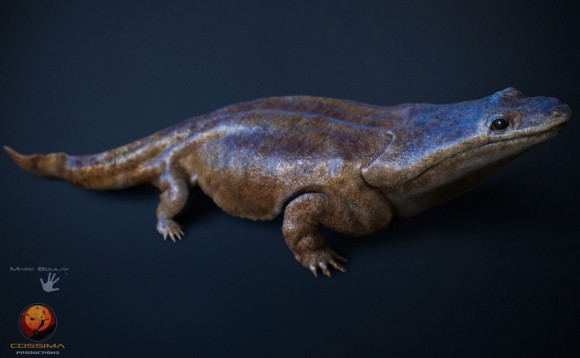 Is it a bird? Is it a plane? No, it’s super salamander!

In the background were the very first dinosaurs and mammals: small, marginal, almost forgettable animals. If you were around back then, you would never imagine that these shadowy creatures would go on to evolve into things like Tyrannosaurus and humans.

At this fragile time in their evolution, these groups were just getting their footing. Animals such as Metoposaurus were waiting near the shores to ambush little primitive dinosaurs that ventured too close to the water.

But things changed. Around 200m years ago, Pangaea began to break apart. As North America and Europe ripped away from each other, huge volcanoes started to erupt. Others erupted further south, as South America ruptured from Africa.

These volcanoes were nothing like the Hawaiian lava flows or Pompeii-style explosive eruptions that we are familiar with. These were huge fissures in the earth, which spewed out lava more or less constantly for thousands of years.

Around 3m cubic kilometres of lava were expelled. The rock formed when it cooled down covers huge swaths of the eastern United States, the western fringe of Europe, and the coasts of South America and Africa today.

This lava brought with it many other things: noxious gases that poisoned the atmosphere and dramatic shifts in climate, most likely violent alternations between hothouse and icehouse worlds.

Many plants and animals couldn’t cope. Many of the big amphibians, including Metoposaurus and its close kin, were decimated. Having dominated for tens of millions of years, they suddenly couldn’t handle this new world of fire and ice.

Two of the groups that did make it through were the dinosaurs and mammals. Whether by good genes or good luck, these pesky, almost pathetic early species found the means to cope with the extinction. And as things returned to normal and the Jurassic world dawned, they spread around the world and diversified into numerous species.

They remain here today: dinosaurs as 10,000 species of living birds (surviving after over 150m years of domination as Tyrannosaurus and Brachiosaurus-type animals) and about half that many mammals, ranging from mice to men.

So although it will surely be lost in the headline hoopla, the point is this: if those volcanoes didn’t kill off the super salamanders, you probably wouldn’t be sitting here now.