Cyclone Phailin is now officially the strongest storm ever measured in the Indian Ocean. It is striking India’s east coast today.

October 12, 2013, 1100 UTC (6 a.m. CDT). Cyclone Phailin is now officially the strongest storm ever measured in the Indian Ocean. It is striking India’s east coast today. Media reports indicate that tens of thousands are fleeing the coast, but that roads are flooding and conditions are extremely hazardous. With sustained winds of 160 mph (260 kph) yesterday, Phailin’s wind speed has tied with the the Odisha cyclone (formerly Orissa) in 1999, which killed more than 10,000 people and caused $4.5 billion in damage.

By the way, what we in the U.S. call hurricanes are called cyclones in India. At least one Indian meteorologist yesterday commented that Phailin has the potential to be “worse than Katrina,” which was the hurricane that devastated New Orleans in 2005. Phailin is already half the size of India, or twice as wide as Superstorm Sandy, which struck the U.S. east coast in 2012.

The International Business Times is reporting that an estimated 260,000 people have already evacuated along the coastline of India, where Cyclone Phailin, aka Tropical Cyclone 02B, will make landfall today. 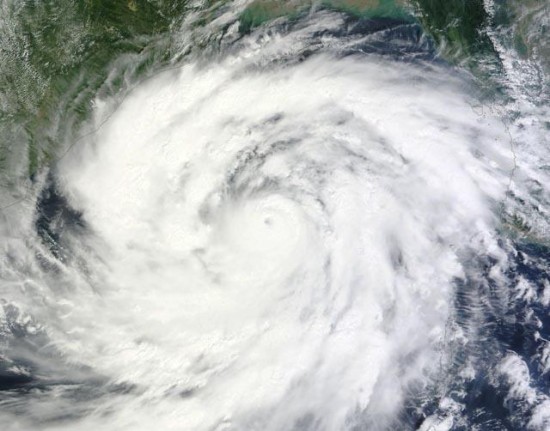 Cyclone Phailin was approaching India’s east coast when a NASA satellite acquired this photo on October 11. Image via NASA.

October 11, 2013, 1900 UTC (2 p.m. CDT). Cyclone Phailin is a major hurricane (specified as a Super Cyclonic Storm) with wind speeds at 160 miles per hour, making it a Category 5 storm on the Saffir Simpson scale. The storm is not projected to weaken much as it slams into parts of eastern India late Saturday according to Indian clocks (Saturday morning U.S. time). The last time a Category 4 or 5 storm struck the eastern coast of India was back in 1999, when Cyclone Odisha struck killing over 10,000 people. A major disaster appears to be in the making.

Indeed, Phailin has the potential to be one of the deadliest storms on Earth for the past several decades. Phailin is expected to make landfall in northeast India, approximately between Visakhapatnam and Puri, within the next 24 hours. 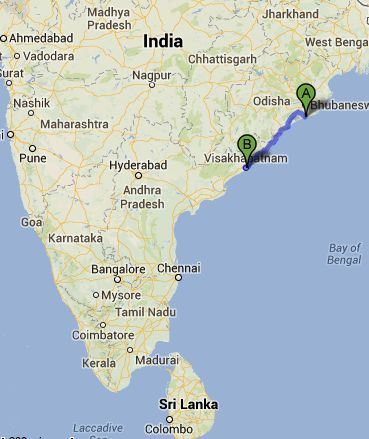 Cyclone Phailin is expected to strike the eastern coast of India, between the two points marked on this map. “A” is Puri, a holy city of the Hindus and popular tourist resort. “B” is the port city of Visakhapatnam, sometimes called The Jewel of the East Coast. 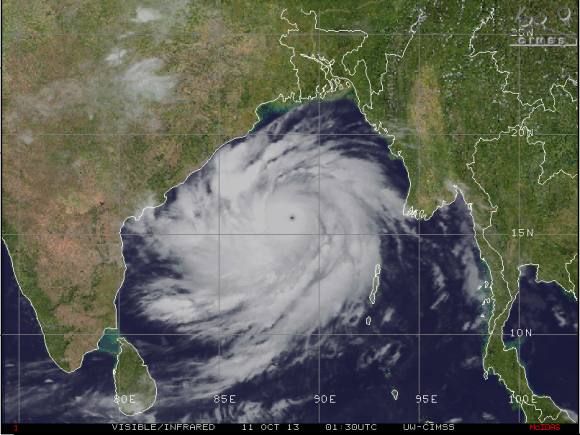 Cyclone Phailin on October 10, 2013. Some media are describing it as “half the size of India.” Image via CIMSS 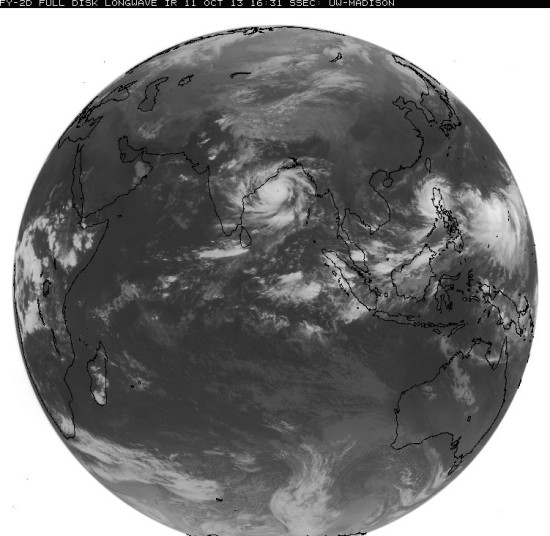 Cyclone Phailin on October 11, 2013 via University of Wisconsin 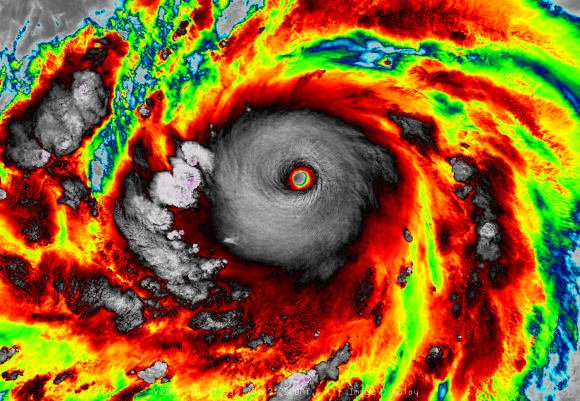 Cyclone Phailin is currently spinning away in the Bay of Bengal. It is a large cyclone and is almost covering up nearly all of the Bay of Bengal. The last time a Category 4 or 5 storm struck the eastern coast of India was back in 1999, when Cyclone Odisha struck killing over 10,000 people. The residents that live off the coast of India are vulnerable to storm surge, flooding, and extreme damage from tropical cyclones. If you throw into the mix a Category 4 or 5 storm, that spells major problems. The storm is super large, meaning storm surge will likely be greater.

Phailin has already had an eyewall replacement cycle, meaning that it could intensify prior to making landfall in eastern India. The storm is very symmetric and is going over very warm waters and perfect atmospheric conditions that are very favorable for an intensifying storm.

Cyclone formation in the Northern Indian Ocean is typically a rare event. That part of the world usually sees 3 to 6 systems per year. Since 2000, the Bay of Bengal averages roughly two cyclones each year. Some of the most active years in the Northern Indian Ocean occurred in the 1970s when the basin averaged roughly five storms each year. 1998 and 1999 were active seasons that each had 3 storms make landfall in India with two of them at hurricane intensity (64 knots or 74 mph or stronger). According to Jeff Masters from Weather Underground, 26 of the 35 deadliest tropical cyclones in world history have been Bay of Bengal storms. Also, 42% of Earth’s tropical cyclone-associated deaths have occurred in Bangladesh. 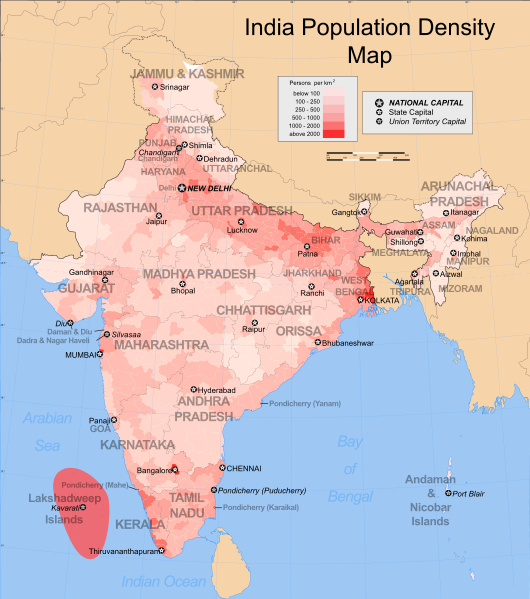 India is the second most populated country in the world with a high percentage along the northeast and eastern coast of India. Image Credit: Wikipedia

India is vulnerable to tropical cyclones. According to Dr. Marshall Shepherd, President of the American Meteorological Society and Professor at the University of Georgia, we have to focus on how communities are vulnerable to weather extremes.

Vulnerability is a function of the disaster itself (e.g. storm strength), the socio-economic vulnerability of those affected, and the adaptive capacity or resilience of those affected. Many of the 40 million people in the path of Phailon have are highly socio economically vulnerable with low adaptive capacity = human disaster. Katrina or Andrew times a factor of perhaps 100 or more…

India is already evacuating and preparing for Cyclone Phailin. However, the outer rain bands of the storm is already over land, and the weather is expected to continue to deteriorate. Storm surge of 20 feet or higher is possible. Flooding is very likely as the system is very large. This storm will likely be extremely devastating for their economy along the coast. 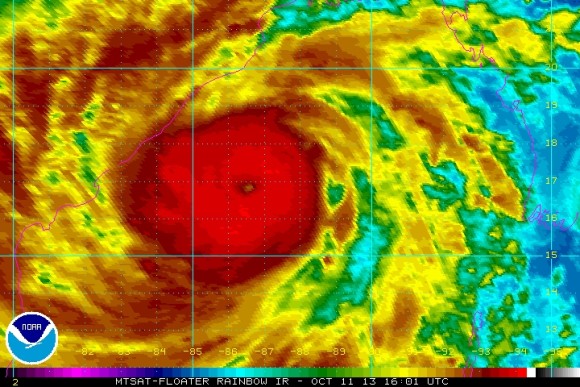 Bottom line: Cyclone Phailin is an extremely dangerous storm that is going to hit the eastern coast of India within the next 24 hours as a high end Category 4 or Category 5 storm. The last time a storm of this intensity hit this region, over 10,000 people died. Conditions will continue to deteriorate over the next 24 hours as the storm brings 150+ mile-per-hour winds, storm surge greater than 20 feet (6 meters), and significant flooding. I wish there was good news to share, but this setup looks almost catastrophic. Prayers go out to those affected by this storm.