Sun on the sky’s equator

Another great explanation of Friday’s equinox – plus beautiful graphics – from astronomer Guy Ottewell. 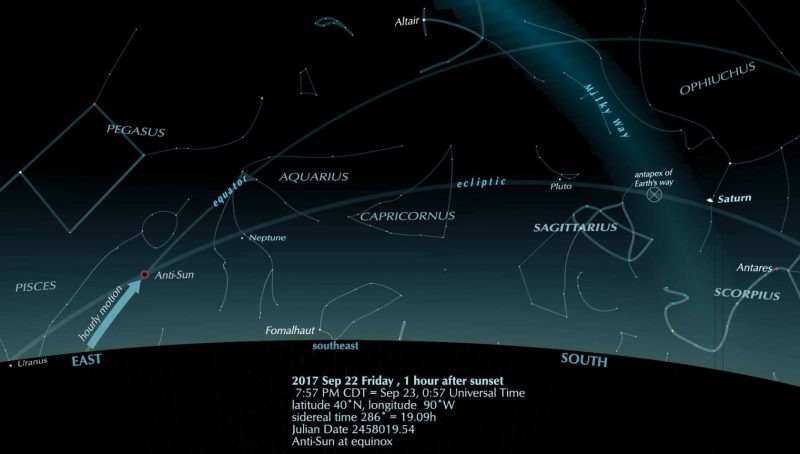 View larger. | Anti-sun point on the day of the equinox, September 22. Chart set for an hour after sunset, mid-U.S. At this location, it’s about 3 hours after the instant of the equinox. At an equinox, the sun is at the intersection of the sky’s ecliptic and equator. But these 2 great circles around our sky intersect at 2 points, and you can see that the “anti-sun” – as we can call the point 180 degrees from the sun – at the second intersection of the sky’s ecliptic and equator. Image via Guy Ottewell.

The equinox will strike, like a bell, on Friday September 22, 2017. It heralds fall in America, autumn in Europe, and spring in the Southern Hemisphere. So the safe term for it is the September equinox.

It is the moment at which the sun, traveling as ever on the ecliptic, crosses southward over that other sky-circling line, the celestial equator. This moment is 20:02 Universal Time, which is four or more hours earlier by clocks in North America.

Our sky scene above, for an hour after sunset on equinox day in mid-U.S.A., happens to be about three hours after the instant of the equinox. You can see that the anti-sun, as we can call the point 180 degrees from the sun, appears to be just on the opposite crossroads of ecliptic and equator. Actually it’s a little way past, the fraction of a degree that the sun moves in three hours. The anti-sun point is already a little way into the northern celestial hemisphere, as the sun is a little way into the southern.

Each day, the sun has been riding lower across our skies. The park bench to which we used to take out breakfast no longer gets sunshine: the morning sun now slinks behind the trees.

Each day the sun has risen at points farther south along the horizon, and on equinox day it will rise exactly at the east point. Or will it?

If we want to be exact, and mean by sun the center of the half-degree-wide sun, there is only one instant when it is on the celestial equator. So it follows that there is only one spot on Earth’s equator which gets to have the sun exactly overhead. If the equinox had been at 12 Universal Time, the sun would have been overhead on the zero or Greenwich meridian, but, being 10h02m later, it’s overhead at longitude 150.46° (the hours multiplied by 15) east, which is in the Pacific Ocean, north of the islands that are north of eastern New Guinea.

Only at this instant, and at a point 90 degrees west from there on the equator, does the sun’s center rise exactly in the east.

But not only on the equator: also at the other points on Earth along a circle that you could draw with center at this Pacific point and radius 90°. On the western half of this circle the sun is at this moment rising due east and for the other half it is setting due west. At the top of this circle, which is our north pole, the sun’s geometrical center comes up and touches the horizon (at longitude 150.46° east) for an instant, and goes down. At least I think so. Didn’t really mean to get into so much geometry.

Though it’s all most conveniently described by saying that the sun circles around our sky, 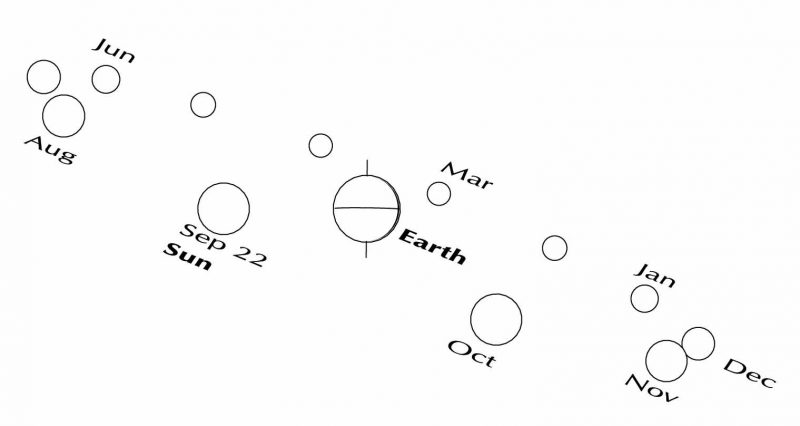 We’ve been convinced by Copernicus that, really, it’s the Earth that does the circling, around the sun. The two models are geometrically equivalent, but, as we now know and even Copernicus didn’t, the sun is 109 times wider than Earth and 333,000 times more massive. You could say, of a fly and a horse, that the fly buzzes around the horse or the horse buzzes around the fly.