Study: Pollution masked warming over eastern US in 20th century

A study suggests eastern U.S. was kept cooler than it would have been otherwise in 20th century due to a particular type of pollution from coal-fired power plants.

Climate scientists said on April 26, 2012 that particulate pollution – that is, pollution made up of small particles suspended in the air – masked warming over the eastern United States during the 20th century. Lead author of the study Eric Leibensperger said in a press release from Harvard:

What we’ve shown is that particulate pollution over the eastern United States has delayed the warming that we would expect to see from increasing greenhouse gases. 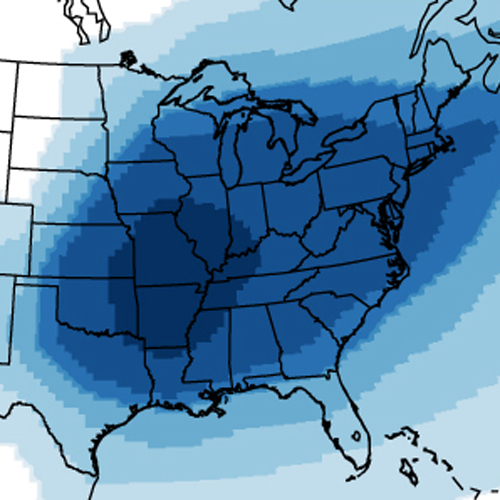 Mean effect on surface temperature, during the period 1970-1990, of particulate pollution. The central region was cooled by as much as 1 degree Celsius. Image courtesy of Eric Liebensberger.

Scientists at the Harvard School of Engineering and Applied Science in Cambridge, Massachusetts published this research in the journal Atmospheric Chemistry and Physics. From 1906 to 2005, these scientists say, mean temperatures have risen by approximately 0.8 degrees Celsius over Earth as a whole. But, during the period 1930–1990, temperatures decreased by as much as 1 degree Celsius in the eastern United States.

… particulate pollution hung thick over the central and eastern states. Most of these particles in the atmosphere were made of sulfate, originating as sulfur emissions from coal-fired power plants. 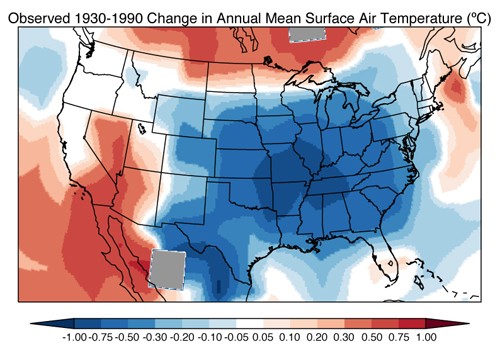 Observed change in surface air temperature between 1930 and 1990. Observations are from the NASA GISS Surface Temperature Analysis. Image courtesy of Eric Leibensperger.

By 2010, as pollution in the U.S. decreased, the average cooling effect over the East had fallen to just 0.3 degrees Celsius.

Bottom line: On April 26, 2012, climate scientists from Harvard announced that particulate pollution suspended in the air over the eastern United States, mainly from coal-fired power plants, masked warming over this region during the 20th century. They referred to this masking as a “warming hole.” They said legislation passed to reduce this type of pollution was successful, so that now the U.S. is coming into line with warming on other parts of Earth’s globe.

Read more about this study from Harvard