Chemical analysis shows that the source is oil pockets trapped in the wreckage of the sunken rig.

A chemical analysis indicates that the source of oil sheens recently found floating at the ocean’s surface near the site of the Gulf of Mexico Deepwater Horizon oil spill is pockets of oil trapped within the wreckage of the sunken rig. 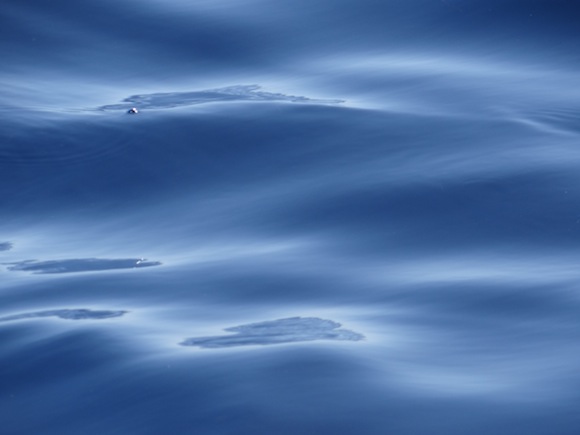 First reported to the U.S. Coast Guard by multinational oil and gas company BP in September 2012, the oil sheens raised public concern that the Macondo well, which was capped in July 2010, might be leaking.

However, both the Macondo well and the natural oil seeps common to the Gulf of Mexico were confidently ruled out, according to researchers from the University of California Santa Barbara (UCSB) and the Woods Hole Oceanographic Institution (WHOI).

The results are published this week in the journal Environmental Science & Technology.

“Silver linings in the dark cloud of the Deepwater Horizon spill are very hard to come by,” says Don Rice, program director in the National Science Foundation’s (NSF) Division of Ocean Sciences, which funded the research.

“Among the precious few are the lessons we’ve learned about the marine biogeochemistry of petroleum mixtures. This team has demonstrated convincingly that we can also use what we have learned for forensic purposes.”

The researchers used a recently patented method to fingerprint the chemical makeup of the oil sheens, and to estimate the location of the source based on the extent to which gasoline-like compounds evaporated from the sheens.

Because every oil sample contains chemical clues pointing to the reservoir it came from, scientists can compare it to other samples to determine if they share a common source.

“This appears to be a slow leak from the wreckage of the rig, not another catastrophic discharge from a deep oil reservoir,” says geochemist David Valentine of UCSB. 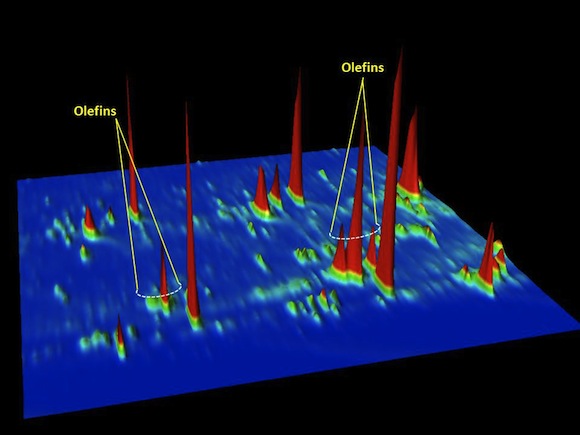 Valentine and WHOI’s Chris Reddy have worked on Deepwater Horizon for much of the last three years, investigating a wide range of problems, including the composition of the oil, detection of subsurface plumes, the biodegradation of the oil, the fate of the dispersants and the chemical transition from floating oil slicks to sunken tar balls.

“Because of our ongoing funding from NSF, we were prepared to interrogate the source of mysterious oil sheens in the Gulf of Mexico,” said Valentine.

“We’ve been exploring new ways to do this for several years in the context of natural seeps, and this event provided us an opportunity to apply our fundamental advances to a real-world problem.”

The scientists analyzed 14 sheen samples skimmed from the sea surface during two trips to the Gulf of Mexico.

But the sheen samples also contained trace amounts of olefins, industrial chemicals used in drilling operations. The presence of olefins provided a fingerprint for the sheens the scientists could compare to the samples they had analyzed during the last three years.

Olefins are not found in crude oil and their uniform distribution in the sheens indicated that the Macondo well was unlikely to be the source.

The team surmised that the sheens must be coming from equipment exposed to olefins during drilling operations.

“The occurrence of these man-made olefins in all our sheen samples points to a single main source, which contains both Macondo oil and lesser amounts of the drilling fluids that harbor the olefins,” said Valentine.

“This pointed us to the wreckage of the rig, which was known to have both, as the most likely source for the sheens.”

The researchers compared the sheen samples to other field samples, some of which they expected would contain olefins and some they thought would not.

The reference samples included two pieces of debris from the Deepwater Horizon found floating in May 2010, as well as oil collected by BP in October 2012, during an inspection of the 80-ton cofferdam that had been abandoned at the seafloor after its use in a failed attempt to cover the Macondo well in 2010. 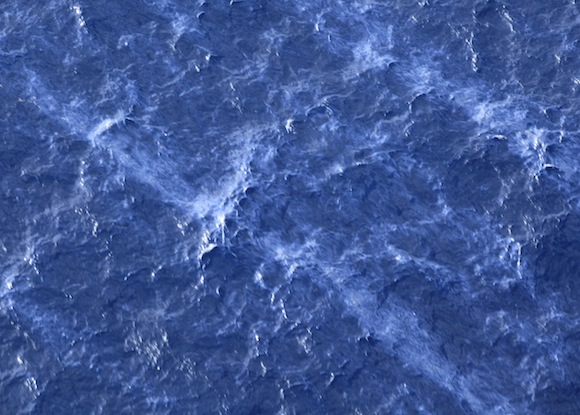 The team’s gas chromatography analysis of BP’s cofferdam samples definitively showed that it was not the sole source of the leak as there were no olefins present.

Prior to the analysis the cofferdam had become the prime suspect as the source when BP found small amounts of oil leaking from its top.

BP scientists acquired oil samples from this leak point before sealing the leak, thinking they had resolved the problem. However, the sheens on the sea surface persisted, and the lack of olefins pointed to another source entirely.

When Valentine and Reddy compared the chemical makeup of the sheens with debris found floating in 2010, they found a match. That debris, which came from the rig itself, was coated with oil and was contaminated by drilling mud olefins.

“The ability to fingerprint synthetic hydrocarbons allowed us to crack this case,” Valentine said. “We were able to exclude a number of suspects and match the olefin fingerprint in the new oil slicks to that of the wreckage from the sunken rig.”

The chemical analysis also told researchers which sheens had surfaced more recently than others, allowing them to reconstruct a trajectory for local ocean currents that pointed back to the oil’s source.

By looking for sheens that showed the least amount of evaporation, they determined that oil surfaced closer to Deepwater Horizon wreckage than to the cofferdam site.

To explain how the oil might be trapped and released from the wreckage, the scientists point out that when the Deepwater Horizon rig sank, it was holding tanks containing hundreds of barrels of a mixture of drilling mud and oil.

Over time, corrosive seawater can create small holes through which oil can slowly escape to the surface. The researchers suspect that the containers on the rig holding trapped oil may be the source of the recent oil sheen.