Researchers have found an unusual divide in song themes sung by whales in Madagascar and western Australia.

One of the most fascinating pursuits in 21st century science is the study of whale songs in Earth’s mighty global ocean. A couple of months ago, we ran a story about sperm whales using clicks to communicate that seem to vary due to culture, for example, not genetics as you might expect. You might also expect whales of the same species in a single part of the ocean to sing songs that are similar. But study from the Wildlife Conservation Society (WCS) – appearing in the January 2012 edition of Marine Mammal Science – now reveals that, while the songs of humpback whales on both sides of the southern Indian Ocean share one similar part or theme, the rest of the themes in the whales’ songs are “almost completely different.”

You can hear some of the songs in the audio above. I wish the WCS had provided more information about this audio clip, but they didn’t. I think what’s going on here is that we’re hearing two different sorts of songs from whales on both sides of the southern Indian Ocean, specifically near Madagascar and Western Australia. They did say that males humpbacks are most often the singers, and they sing most often on the whales’ winter breeding grounds, migratory routes, and summer feeding grounds. The songs themselves are:

… complex arrangements of parts or “themes,” consisting of ascending and descending wails, moans, and shrieks that are repeated in cycles lasting up to 30 minutes. The transmission of songs between individuals from different populations is likely to occur on feeding grounds or during migration when whales from different populations mix. Or, transmission of song may occur when individual male “troubadours” travel to different breeding grounds between breeding seasons or possibly during the same breeding season.

What are whales talking about? Help find out 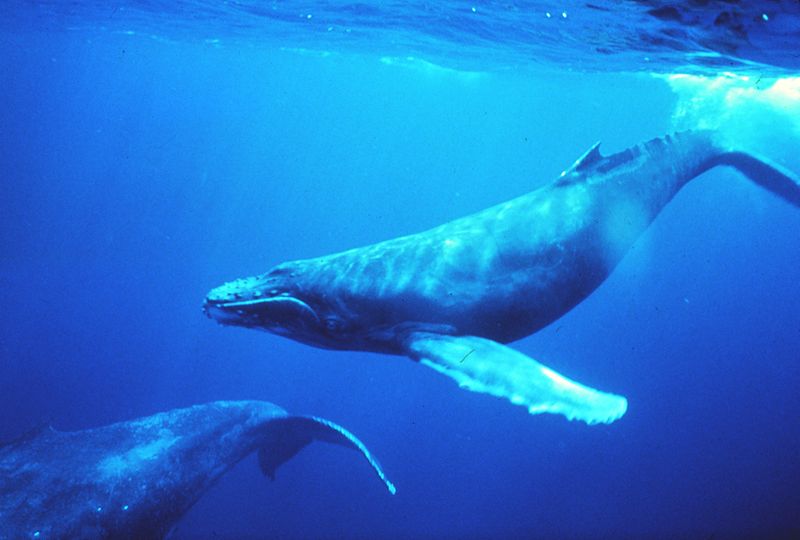 The results of the WCS study – conducted with Columbia University and with researchers in Australia – contradict previous humpback whale song comparisons. When songs from populations in the same ocean basins are compared, researchers usually find the songs containing several or many similar parts or themes. This study shows only one common theme for humpbacks in the southern Indian Ocean, while other parts of the songs varied.

The researchers say the differences in songs between Indian Ocean humpback populations probably indicate a limited exchange between the two part of the ocean. They might shed new light on how whale culture spreads.
Lead author of the study – Anita Murray, who conducted the research while a graduate student at Columbia University and the Wildlife Conservation Society and who is now pursuing her doctorate at the University of Queensland in Australia – said:

In the Northern Hemisphere, within an ocean basin whales sing songs that are composed of the same themes. However, whales in the southern Indian Ocean are singing almost completely different songs … The reason for this anomaly remains a mystery. It could be the influence of singing whales from other ocean basins, such as the South Pacific or Atlantic, indicating an exchange of individuals between oceans which is unique to the Southern Hemisphere.

Read more about this story from EurekAlert