A line of thunderstorms across the US Midwest on April 28 knocked over a tent at a St. Louis sports bar, killing one man and injuring at least 100 people.

A line of severe thunderstorms developed and pushed eastward on April 28, 2012, packing winds over 60 miles per hour, large hail, and tornado warnings issued through parts of the St. Louis metropolitan area.

On this day, many people were out and about for the St. Louis Cardinals versus the Milwaukee Brewers baseball game. At Kilroy’s Sports Bar, a party tent was constructed that held approximately 100-150 people who were celebrating a win after the Cardinals defeated the Brewers. The severe thunderstorm pushed through around 4pm CDT, and the initial winds, or the gust front of the storm collapsed the tent injuring over 100 people and killing one person.

The supercell storm responsible for the wind and hail damage in St. Louis. This is an image using Correlation Coefficient, a dual polarization feature. Image Credit: RadarScope

The storms that developed across Missouri, Illinois, Indiana and Kentucky formed due to a cold front lingering in the area. The cold front was the lifting mechanism that allowed these storms to fire up and become strong. The Storm Prediction Center released the standard slight risk area for these areas with a 15% probability to see large hail and strong winds within 25 miles of a point. Cooler air to the north and warm, summer-like temperatures to the south also helped fuel these storms to pack a punch across the area. These storms produced very large hail, almost the size of baseballs, that caused damage to vehicles and windows in this region.

Check out this hailstorm that occurred in Maryland Heights, Missouri. Very scary stuff! 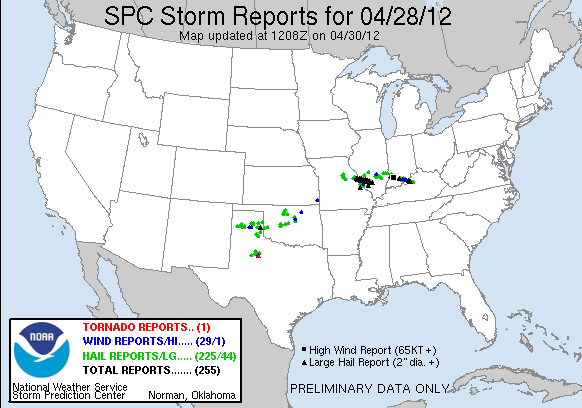 Bottom line: A cold front triggered severe thunderstorms that produced large hail and strong winds across Missouri, Illinois, Indiana, and Kentucky. A few of these storms did produce tornado warnings, but fortunately, there were no tornado reports from the storms that developed on April 28, 2012. A large tent near Kilroy’s Sports Bar collapsed as strong winds blew it over. Nearly a hundred people were injured, and one person died. The tent was supposed to withstand winds of 90 mph, but the National Weather Service reported that winds were around 50 mph. All prayers go out to those affected by these storms.