A 6.4-magnitude earthquake rocked Mexico’s southern Pacific coast on Thursday. Many frightened people, but only minor damage reported so far.

The U.S. Geological Survey (USGS) has reported a strong, 6.4-magnitude earthquake on the southern Pacific coast of Mexico on Thursday (May 8, 2014). AP reports that frightened people rushed out into unseasonal torrential rains that were also bearing down on the coast. No injuries reported so far, and only minor damage.

The quake was centered in the Mexican state of Guerrero. It was felt about 171 miles (277 kilometers) away in Mexico City, where, according to AP, office workers streamed into the streets away from high-rise buildings.

USGS reports details of the quake as follows:

The video below is from Mexico City earlier today. You can see trees and streetlights swaying as the earthquake strikes. A women gets out of her car, then goes back to her car to retrieve her purse.

If you don’t speak Spanish, skip to 00:48 seconds in this next video. You’ll see people milling around on the streets after the quake, and also lights in the television studio shaking while the quake was in progress. Video via todoactualidad. 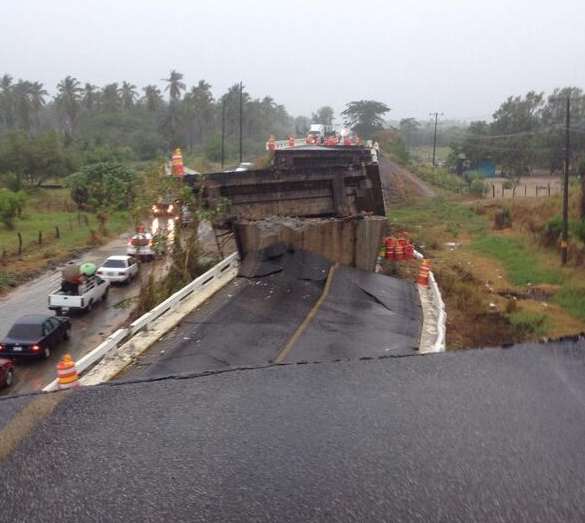 Damage to a bridge near the May 8 earthquake epicenter in Tecpan de Galeana, Mexico. It appears that nobody was on the bridge when it collapsed. Twitter Image via @Foro_TV

On April 18, a major quake — 7.2. magnitude — hit the same state, but there were no reports of major damage that day.

Bottom line: A 6.4 magnitude earthquake shook southern Mexico, on the Pacific coast, on Thursday, May 8, 2014. No injuries or damages reported so far.