Reports of the magnitude of the January 26, 2014 earthquake in Greece vary, but, at this time, the USGS is still reporting the quake as a magnitude 6.0.

A strong earthquake has struck near the town of Lixourion, or Lixouri – population 9,800 – on the island of Kefalonia in western Greece. Reports of the magnitude of the quake vary, but, at this time, the U.S. Geological Survey (USGS) is still reporting the quake as a magnitude 6.0. The local time was late Sunday afternoon, January 26, 2014. Apparently the shaking was also felt in other countries, including Albania, Montenegro, Bulgaria and southern Italy. Seismologists and local officials are reporting damage and possible injuries, according to at least one report. Few details are available at this time. According to GreekReporter.com:

Residents of Kefalonia are scared. This event reminded them about the great earthquake of 1953 (M 7.2), where hundreds of people lost their lives. 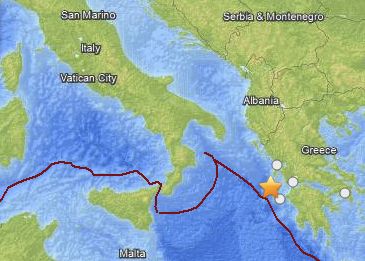 The January 27 earthquake took place on the Greek island of Kefalonia, with the epicenter in the town of Lixourion.

Bottom line: The USGS is reporting a strong earthquake in western Greece, on the island of Kefalonia, with the epicenter at the town of Lixourion on January 26, 2014.