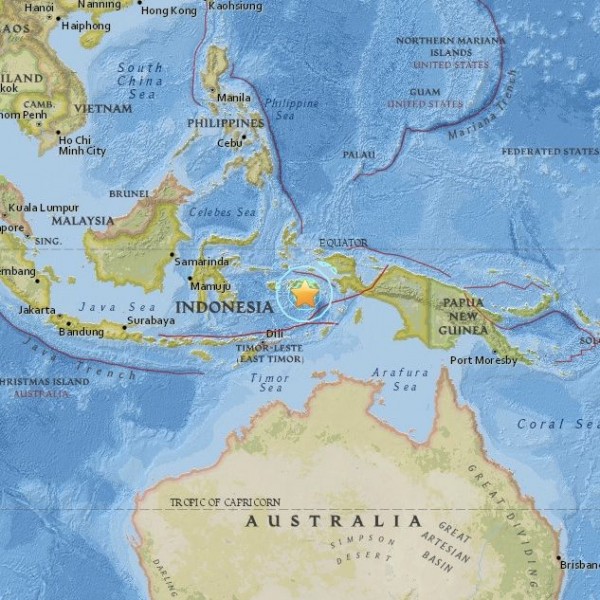 Large earthquake in the Banda Sea, December 9, 2015. Image via USGS

The U.S. Geological Survey (USGS) reports an earthquake of 6.9 magnitude – a strong earthquake – that struck in the ocean southeast of Indonesia’s eastern island of Ambon on Wednesday, December 9, 2015. This quake is also being reported as a 7.1-magnitude quake by some media; the difference may stem from measurements by local authorities versus those by USGS. The quake struck 94 miles (151 km) from Ambon, the main city and seaport of Indonesia’s Ambon Island and the capital of Indonesia’s Maluku province. It occurred at 1021 UTC. Translate to your timezone here.

There is no large-scale tsunami warning in effect, and no indication that a tsunami struck populated areas, although a small-scale tsunami might have affected coastal villages in Indonesia. There are no immediate reports of damage or casualties due to the quake.

This part of the world is prone to powerful earthquakes, as the map below indicates. 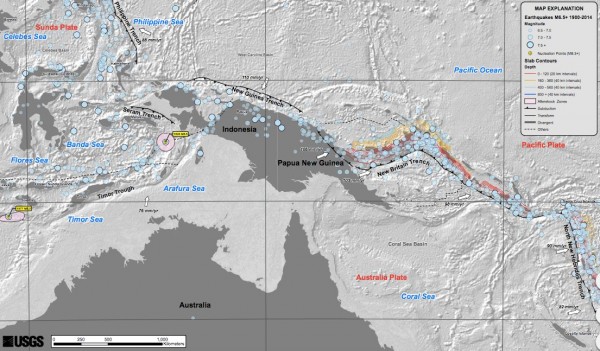 View larger. | The area where the December 9 quake occurred has frequent and powerful earthquakes. On this map, blue circles represent earthquakes. Map via USGS.

Indonesia sits on a boundary between land plates, on the edge of what scientists call the Ring of Fire around the entire Pacific. Here, one great land plate is pushing under another. UGSG says:

Along the South Solomon trench, the Australia plate converges with the Pacific plate at a rate of approximately 95 mm/yr towards the east-northeast. Seismicity along the trench is dominantly related to subduction tectonics and large earthquakes are common: there have been 13 M7.5+ earthquakes recorded since 1900.

On April 1, 2007, a M8.1 interplate megathrust earthquake occurred at the western end of the trench, generating a tsunami and killing at least 40 people.

This was the third M8.1 megathrust event associated with this subduction zone in the past century; the other two occurred in 1939 and 1977.

Bottom line: USGS is reporting a 6.9-magnitude quake (also being reported in some places as a 7.1-magnitude) in the ocean near Indonesian Islands on December 9, 2015.