Dangerous Cyclone Giovanna will push into Madagascar as a strong cyclone on February 13, 2012. All residents should take all warnings seriously and prepare now!

UPDATED FEBRUARY 13, 2012 7:00 A.M. CST (13:00 UTC). Cyclone Giovanna is now moving to the west-southwest around 15 miles per hour. The storm is expected to push into Mozambique within the next 12 hours. Also, restrengthening is possible once it emerges into the Mozambique Channel.

Overnight, Cyclone Giovanna intensified into a strong Category 4 with sustained winds of 145 mph and gusts around 170 mph. Satellite estimates show a pressure reading of 925 millibars (mb). It formed a large, defined eyewall with very cold, intense cloud tops around the center. The estimated diameter of the symmetrical eyewall is 40 nm wide. The storm created a mesoscale anticyclone that provided it excellent radial outflow. In fact, the Joint Typhoon Warning Center mentioned that it took on an appearance of an annular tropical cyclone. Annual storms are rare, and they can typically maintain their strength longer than typical hurricanes/typhoons. Based on current satellite trends, Giovanna will likely push in somewhere between Vatomandry, Andevoranto, Brickville, and eventually inland into Antananarivo (as a weaker storm). The western portion of the storm appears to be losing a little convection this morning (February 13, 2012 8am EST), which could be a good sign of the system losing a little bit of its punch. Regardless of any weakening trends, this is a serious situation as this storm will still bring significant winds, heavy rain, and storm surge to the central portions of the Madagascar coasts.

Here is an animated infrared satellite showing the recent developments of Giovanna. When watching this storm develop, you can really see how defined the eye becomes in the last frames.

It would not have surprised me if this storm strengthened yesterday into a Category 5 storm at one point as the cloud tops and satellite intensities were showing estimates typical of a Category 5 storm (winds exceeding 156 mph). All residents should take this storm seriously and relocate away from the shore and move into sturdier buildings if possible.

Notice how clear and large the eye has become? You see the bright yellow colors? That indicates colder cloud tops which shows strengthening. Not good for Madagascar!

FEBRUARY 12, 2012 11:06 A.M CST (17:06 UTC) A very strong cyclone in the Indian Ocean, called Giovanna, has developed and is pushing towards the Madagascar coast. Cyclone Giovanna became the 12th depression in the 2012 Indian ocean and quickly strengthened into the seventh named storm. Giovanna currently has sustained winds approximately around 100 miles per hour (at least 85 knots). In the Indian Ocean, we do not have hurricane aircraft that flies into tropical systems, so all of these estimates are based from satellite imagery of the storm. Giovanna rapidly intensified into a strong cyclone back on February 10, 2012 and quickly formed a pinhole eye.

Residents of central and eastern portions of Madasgascar should be preparing now and evacuate the coastal areas as this storm is projected to make landfall on February 13, 2012 as a major cyclone with winds sustained of at least 100 mph. 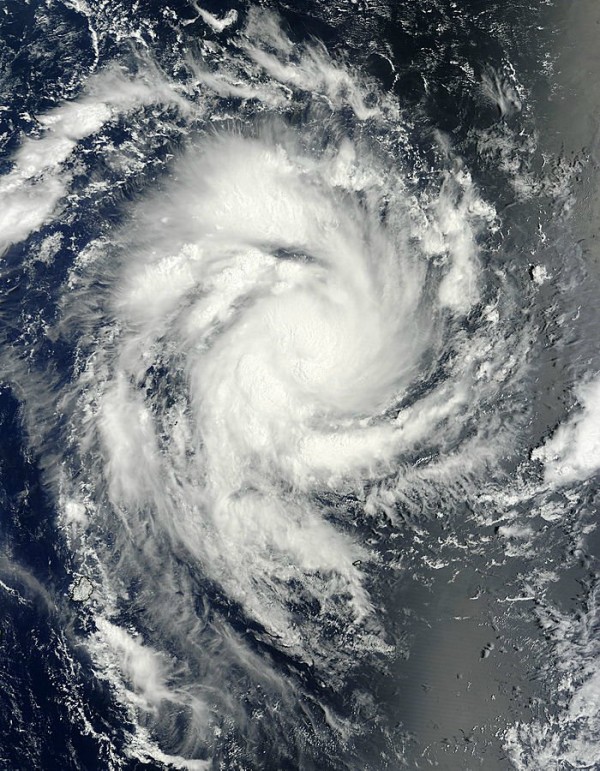 Giovanna formed on February 9, 2012 and quickly organized into a super cyclone by February 10, 2012. The most interesting part of this storm was how rapidly it intensified over the open waters of the western Indian Ocean. The storm quickly gathered strength and formed a pinhole eye. When cyclones, also called hurricanes (Atlantic) and typhoons (western Pacific) rapidly intensify, the eye can sometimes be extremely small within the center of circulation. If the eyewall is between one to three miles wide, the cyclone can be considered to have a pinhole eye. Pinhole eyes are typically rare occurrences, and most cyclones never develop them. In the Atlantic Ocean, the most memorable pinhole eye occurred in 2005 when Major Hurricane Wilma significantly intensified into the strongest hurricane in the Atlantic basin with a barometric pressure of 882 millibars. These eyewalls indicate rapid intensification and can cause a lot of fluctuations in strength for a tropical cyclone. Cyclones have a difficult time maintaining strength when they are powerful cyclones with winds over 130 mph. They fluctuate in intensity by going through eyewall replacement cycles. When Giovanna developed a pinhole eye, it had sustain winds of 140 mph with gusts around 155 mph. In the Saffir-Simpson scale, that would make Giovanna a very strong and dangerous Category 4 storm. However, the eyewall had a replacement cycle, and the storm weakened back into a Category 3 storm.

Image of Giovanna with a pinhole eye on February 11, 2012. Image Credit: CIMSS

Giovanna is currently in a favorable environment for continued strengthening as wind shear is low and ocean waters are very warm. The current forecast is for Giovanna to strike central/eastern Madagascar as a strong Category 3 storm with sustain winds around 110 knots (at least 125 mph). As of this morning (February 12, 2012), the strongest convection of storms (highest/coldest cloud tops) are across the western portions of the system. Just like other tropical cyclones, winds will not be the only issues regarding this system. Waves, storm surge, and flooding could be another issue for Madagascar as it pushes westward. Wave heights are estimated around 24 feet, and those along the southern/central portions of the east coast of Madagascar will likely get the full force of Giovanna as the strongest winds and direct winds/surf against the coast will occur due to the location of the circulation. This storm is producing a lot of deep convection, which shows a strong cyclone and very intense rain. I would not rule out five to ten inches of rain with some areas receiving more than a foot of rain.

Track of Giovanna has the storm pushing directly into the central portions of Madagascar. Image Credit: Joint Typhoon Warning Center

Another major concern about this storm is that once it pushes out of Madagascar, it will likely bring more rains to a flood prone area across Mozambique in southeastern Africa. Mozambique has already been hit by storms such as Cyclone Funso that produced a lot of rain and major flooding across the region. Giovanna will likely be a weaker storm system after it moves across the mountainous areas of Madagascar, but the system will still provide flash flooding across Mozambique. The storm is projected to push into this region later this week, around February 15-17. In fact, based from the Joint Typhoon Warning Center forecasts, Giovanna could restrengthen as it pushes into southern portions of Mozambique. All residents of Mozambique should closely monitor this situation as it evolves.

Bottom line: Cyclone Giovanna will push westward into Madagascar as a major cyclone with sustained winds of at least 115 mph. Flooding, storm surge, and wind damage is very likely as it pushes into Madagascar on February 13, 2012. Forecasting intensity of a cyclone is rather difficult, but atmospheric conditions show a favorable environment for the storm to remain potent. The only intensity issue would be based on an eyewall replacement cycle. If one occurs before it hits Madagascar, it could weaken prior to landfall. Residents across the entire eastern coast of Madagascar should be ready for a strong cyclone capable of producing a lot of damage across this region. Once this storm pushes over Madagascar, it will emerge over the Mozambique Channel and possibly restrengthen back into a cyclone of winds stronger than 75 mph. Once again, Mozambique residents should closely monitor this situation, especially since they have been significantly battered by cyclones Dando and Funso over the past month that have provided flooding rains in the region.