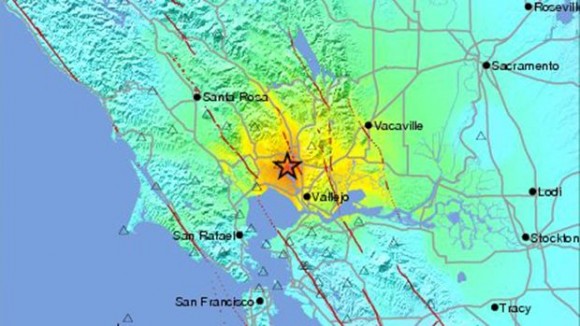 … widespread power outages in Napa and Sonoma, causing moderate damage across the region, significantly damaging historic buildings in Downtown Napa, and forcing the [California Highway Patrol] to close ramps on a major highway.

In Napa, at least 120 people were injured and treated in the emergency room of Queen of the Valley Hospital, said Hospital president Walt Mickens. Six patients sustained critical injures, including a young child, Mickens said.

USGS said that, immediately after the main 6.0-magnitude earthquake, the probability of strong and possibly damaging aftershocks in the next 7 days is approximately 54%. At least 36 small aftershocks were recorded immediately following the earthquake.

USGS further said that, most likely, the mains earthquake Sunday morning would be the largest in the sequence. However, there is a small chance (approximately 5-10%) of an earthquake equal to or larger than the mainshock within 7 days of the main quake.