A study says that the Santa Ana winds have an accomplice when it comes to California wildfires – extremely dry air pulled down from the stratosphere.

The May 2013 “Springs Fire” burned 25,000 acres northwest of Los Angeles. A new study finds that natural atmospheric events known as stratospheric intrusions, which bring extremely dry air from the upper atmosphere down to the surface, add to the fire danger effects of the Santa Ana winds, and exacerbate some air pollution episodes. Photo credit: Night Owl City/Flickr

Southern Californians and writers love to blame the hot, dry Santa Ana winds for tense, ugly moods, and the winds have long been associated with destructive wildfires.

Now, a new study finds that on occasion, the winds have an accomplice with respect to fires, at least: Natural atmospheric events known as stratospheric intrusions, which bring extremely dry air from the upper atmosphere down to the surface, adding to the fire danger effects of the Santa Anas, and exacerbating some air pollution episodes.

The findings suggest that forecast models with the capacity to predict stratospheric intrusions could provide valuable lead time for agencies to issue air quality alerts and fire weather warnings, or to reallocate firefighting resources before these extreme events occur.

Andrew Langford, a research chemist at the National Oceanic and Atmospheric Administration (NOAA) is lead author of the study. Langford said:

The atmosphere could give us an early warning for some wildfires.

The study has been accepted for publication in Geophysical Research Letters, a journal of the American Geophysical Union. 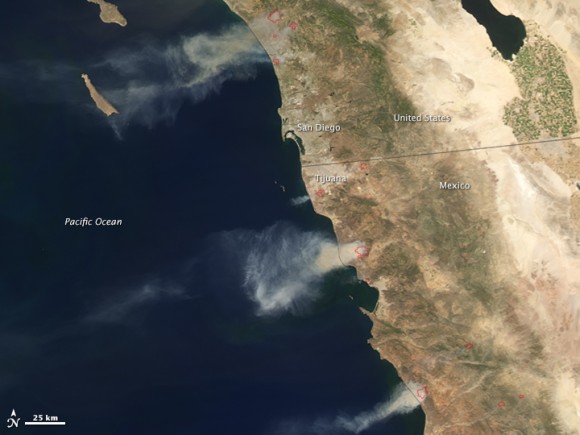 Last year’s wildfire season got off to a ferocious start in southern California and northwestern Mexico when record-breaking temperatures and powerful Santa Ana winds fueled at least nine fires between May 14–16, 2014. Image credit: NASA

The authors took a detailed look at the May 2013 “Springs Fire” that burned 100 square kilometers (25,000 acres) about 75 kilometers (50 miles) northwest of Los Angeles. The researchers used a NOAA forecast model that incorporates satellite observations of ozone, wind data, and other atmospheric information to detect the occurrence of the intrusions.

The analysis showed that in the early hours before the Springs Fire, a tongue of air characteristic of the stratosphere—extremely dry and very high in ozone from the stratosphere’s ozone layer—reached to the surface in southern California and extended as far south as Baja California.

The researchers found that ground-based monitoring stations near the fire’s origin also confirmed the telltale signs of the intrusion right before the fire broke out: A large drop in relative humidity and a rise in ozone. As the day went on, a combination of factors accelerated the fire: Low humidity, persistent high winds, dry condition of the grasses and other vegetation, clear skies and bright sunlight, and very warm surface temperatures. A few days later, cloudy skies, a drop in temperature, a shift in winds, and widespread rainfall helped extinguish the fire.

The stratospheric intrusion also had another downside during the Springs Fire: It added ozone from the upper atmosphere to the urban and fire-related pollution produced in the lower atmosphere. On the second and third days of the fire, this helped to push levels of ozone—which can harm people’s lungs and damage crops—over the federal ozone limit at 24 monitoring sites across southern California. Monitors as far away as Las Vegas also saw a spike in ozone on the third day of the fire. Langford said:

Stratospheric intrusions are double trouble for Southern California. We knew that the intrusions can add to surface ozone pollution. Now we know that they also can contribute to the fire danger, particularly during La Niña years when deep intrusions are more frequent …The good news is that with models and observations, we can get an early warning from the atmosphere in some cases.

The frequent occurrence of stratospheric intrusions above the west coast during the fall, winter, and spring suggests that similar circumstances may have played a role in other major southern California fires, including the series of destructive fires that burned more than 3,000 square kilometers (more than 800,000 acres) in October of 2003, and burned about 4,000 square kilometers (nearly a million acres) in October of 2007, say the authors.

Bottom line: The Santa Ana winds have an accomplice when it comes to California wildfires – extremely dry air pulled down from the stratosphere, according to a new study.