Stormy Mother’s Day 2014 for most of United States

Chance for significant severe weather is possible across the Plains on Mother’s Day. Strong tornadoes and large hail possible.

A very active weather pattern across the United States will likely keep a lot of moms inside on this Mother’s Day 2014. An area of low pressure will produce heavy snow across the Rockies and severe weather across the Plains and into the Great Lakes region. A moderate risk for severe thunderstorms have been issued for parts of Kansas, Iowa, and Nebraska. Strong tornadoes, very large hail, and damaging winds are the potential impacts for these areas on Sunday, May 11. Meanwhile, 20.5 million people across the United States will have to deal with gusty winds from the U.S. Southwest into the Southern Plains. 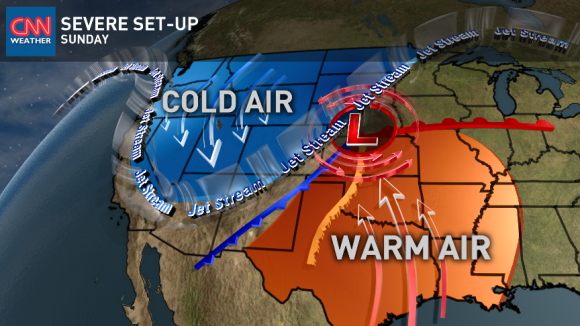 Ingredients are coming together to produce severe weather across the U.S. Central Plains on Sunday, May 11, 2014. Image via CNN Weather. Used with permission.

The Storm Prediction Center has issued a moderate risk for severe storms for north/central Kansas, southeast Nebraska, and south/central Iowa for Sunday, May 11. The moderate risk includes the cities of Omaha [Nebraska], Lincoln [Nebraska], and Des Moines [Iowa]. Over 3 million people are included in the moderate risk area, and these areas could see strong tornadoes, damaging winds over 60 miles per hour, and hail the size of baseballs. The severe weather will likely fire up late in the afternoon and into the evening hours. If you are in a slight or moderate risk for severe storms today, make sure you have several ways of receiving warnings, especially if you have plans to be out for Mother’s Day.

Severe weather outlook for Sunday, May 11, 2014. Anyone in the yellow or red areas are under the gun for severe weather including tornadoes, hail, and damaging winds. Image via Storm Prediction Center

We already saw 10 preliminary tornado reports across Missouri and Iowa on Saturday, May 10, 2014. One tornado was actually photographed and filmed as it struck through parts of Orrick, Missouri. The rating of the tornado will be determined later today when the National Weather Service surveys the damage.

Severe weather is not the only issue hitting the United States. A major snowstorm will produce very heavy snow across the Rocky Mountains today. Some of the higher terrain could pick up one to two feet of snow with isolated spots picking up over 3 feet! Denver, Colorado could record five to ten inches of snow. The average high for Denver is around 70 degrees Fahrenheit (°F). However, highs will struggle to make it into the low 40s today! Snow in May isn’t completely unusual, but we are entering the end of the snow season for parts of the Rockies. The latest snowfall to ever occur in the Denver area was on June 12, 1947. If Denver measures the snowfall that is in today’s forecast, then it’ll likely be the heaviest snow this late in the season Denver has seen in at least ten years. 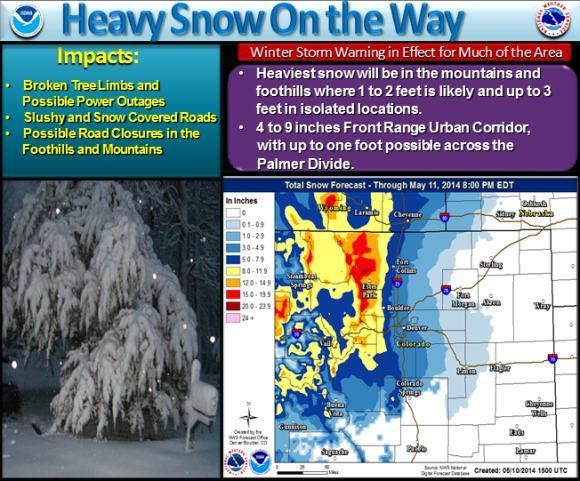 Finally, the country will face some gusty winds across the U.S. Southwest into the Southern Plains. High wind warnings and wind advisories have been issued by local National Weather Service offices. Places in parts of New Mexico could see non-thunderstorm wind gusts of over 60 mph!

Bottom Line: If you live in the U.S. Northeast or along the U.S. West Coast, take your mom outdoors. Otherwise, you might have to deal with gusty winds, severe storms, or rain on Mother’s Day. If you live in the area highlighted for severe weather, make sure you have multiple ways of receiving warnings. Never rely on one source for weather information. As always, stay safe and be weather aware.